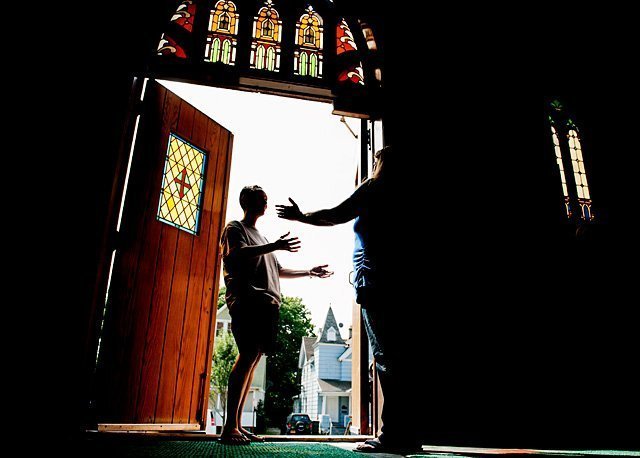 Members of Rochester's Holy Apostles Parish recently found a new way to open the door to those struggling with mental illness. A team of parishioners that includes social workers and psychiatric nurses welcome agitated individuals and assist them if necessary.

Donald Stephens encountered depression at a young age. Even as a child, he felt like an outsider in his own family and battled with depression and anxiety. In adolescence, he found that alcohol eased his pain, so he began drinking liquor.

Before he knew it, Stephens had been using drugs for more than 20 years, and he didn’t like the lying, stealing person he’d become. He entered a substance-abuse recovery program and now has been clean for about a year. He still struggles with depression, however, and is a regular client at Catholic Family Center’s Mental Health Clinic in Rochester.

Stephens also is an active volunteer at Lighthouse Liberty Temple on the city’s west side, and he said giving back to the community through his church has helped him to regain some of the self-respect he lost more than two decades ago.

Much attention has focused in the past few months on churches and their relationships with people struggling with mental illness. On Feb. 4 the New York State Catholic Conference, which represents the state’s Catholic bishops in public-policy matters, issued a pastoral statement calling for Catholics to show acceptance and compassion toward mentally ill individuals.

"It is our duty and the duty of every pastor, every chaplain, every religious education director and Catholic school principal, and all others in positions of Church leadership at every level to welcome with openness and affection those men, women and children who are afflicted with any form of mental illness and integrate them into the life of the Church to the fullest extent possible. Furthermore, all Catholics are called to be welcoming of this population in their churches, schools and communities," the bishops wrote in their pastoral statement, titled "For I Am Lonely and Afflicted: Toward a Just Response to the Needs of Mentally Ill Persons."

The next month, the Roman Catholic Diocese of Orange, Calif., teamed with the Rev. Rick Warren’s Southern Baptist Saddleback Church and the Orange chapter of the National Alliance for the Mentally Ill to host a daylong gathering designed in part to equip church leaders to provide effective and compassionate care to people facing the challenges of mental illness.

And on April 25, Agape Counseling invited pastoral and lay leaders to All Nations Church in Henrietta for a Faith Communities Mental Health Conference, a one-day gathering designed to provide education and tools to help churches understand mental-health issues and respond with compassion.

The church must take the lead in dealing with mental health and mental illness, Rev. Warren told the 3,200 people gathered at the Lake Forest, Calif., church for the March 28 "Gathering on Mental Health and the Church," which was recorded and is available online. In many cases, a family’s first telephone call when faced with a mental-illness-related crisis is to its church, he noted.

Indeed, Christians are called to be instruments of hope and witnesses of God’s love and mercy, New York’s bishops wrote in their February pastoral statement.

"We have no better example of how to respond to those with mental illness than that of Jesus Christ. Time and again throughout the New Testament, we encounter our Lord’s mercy towards this population. The curing of this affliction in men, women and children was a central part of Jesus’ healing ministry," they wrote.

Quite a few people are in need of such healing, noted Gretchen DiFante, executive director of Agape Counseling, which is a not-for-profit and nondenominational Christian counseling agency. DiFante, chairwoman of the April 25 conference in Henrietta, said that according to statistics from the National Alliance of Mental Illness, one in four adults — or approximately 61.5 million people — will experience some sort of mental illness in a given year.

"Those numbers translate to a lot of people in our church pews who are silently dealing with mental illness, and many are afraid to come forward to get help because of the stigma around mental illness," DiFante said.

Because of this stigma, people with mental illness often don’t have jobs or close relationships, so churches can be among the best places for them to find social support, observed Melissa Shoemaker, clinical supervisor at Catholic Family Center’s Mental Health Clinic. However, fear of rejection may keep them from trying to join church communities, she added.

Thus, it’s imperative that the people inside those churches look beyond the labels and stereotypes society often casts upon people with mental illness, according to Bishop Kevin Vann of the Diocese of Orange.

"I believe that a response in faith helps us to go beyond that, to see the reality of the struggles of the folks God sends to us," Bishop Vann said during the conference, noting that church leaders and members have an advantage over other organizations or institutions because their efforts incorporate a spiritual component. "Therein, I think, lies the response that no one else is capable to give, and the faith dimension is really connected with physical, emotional and relational and can be a bridge in all this."

Although many pastoral leaders and laypeople alike agree on the need to emulate Jesus and welcome the mentally ill into church communities, quite often their unfamiliarity with mental illness makes them unsure how to do so, noted Father Brian Cool, director of the University of Rochester’s Newman Community. Father Cool, who holds a master’s degree in mental-health counseling from UR, spoke during the local April 25 gathering about the church’s need to welcome and minister to those struggling with mental illness.

"We need to gain a deeper understanding and engage in healing those in need who are knocking on our door over and over again," he said. "Our efforts are feeble because the need is great and we’re not experts at this. The church is just beginning to open this door."

Members of Rochester’s Holy Apostles Parish recently found a new way to open that door. Parishioners had been accustomed to people with mental illnesses walking into the urban church and sometimes creating disturbances, but after one particularly disrespectful outburst almost a year ago, they decided to take action. Parishioner Christopher Barrow, a former police officer, teamed with other parishioners who are social workers and psychiatric nurses, and together they keep an eye out for potential disturbances during Masses. If team members notice people who seem disoriented or agitated entering the church, they’ll welcome the individuals, sit next to them and, if necessary, ask them to walk to the back of church to talk together.

Father Tony Mugavero, pastor at Holy Apostles, made it very clear that he wanted people suffering from mental illness to feel welcome in the church, Barrow said. At the same time, he also wanted parishioners to feel safe and for Masses to be a time of respectful worship, so team members strive to strike a balance between those two goals, he said.

"The idea is to address (people) in a very kind but a very firm way. I think the way we do it, it’s not a personal attack on them. It’s just saying … there are certain expectations you have to respect, one being the Mass itself, and two, the other parishioners," Barrow said, noting that he believes this approach is working because people with whom the team has talked have continued to come back to Holy Apostles and to respect the boundaries that have been set.

Another way to open the door to people with mental illness would be for all area houses of worship to work together to produce a listing of their services, Shoemaker said. On more than one occasion, her clients have expressed a desire to join a faith community, but Shoemaker wasn’t sure which houses of worship were located near the clients or offered services at convenient times.

Mental illness often creates a sense of isolation among those who struggle with it, so the simple act of listening in a humble and nonjudgmental way sometimes can be powerful, according to Deacon Tom Lambert, cochair of the Archdiocese of Chicago’s Commission on Mental Illness. During the March 28 conference in California, Deacon Lambert spoke about ways parishes can pastorally respond to people with mental illness. He said one way his archdiocese has responded successfully is by celebrating an annual Mass for anyone dealing with mental illness in themselves or their loved ones.

"It’s giving a sign of hope that the church is doing something," he said. "The church cares, … the church understands what I’m going through."