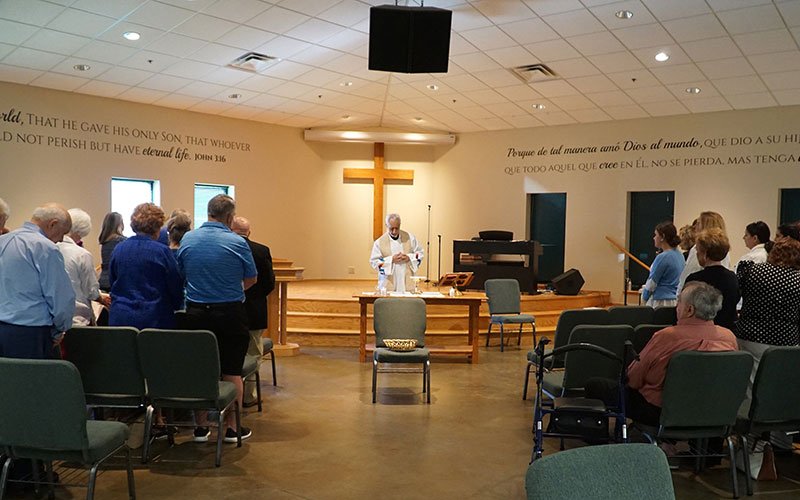 More than 50 people in Louisville, Ky., attend Mass at Christ Chapel on the backside of Churchill Downs May 1, 2022. (CNS photo by Kayla Bennett/The Record)

LOUISVILLE, Ky. (CNS) — While the first Saturday in May’s running of the Kentucky Derby boasts the fastest two minutes in sports, Churchill Downs’ backside chapel hosts what might be the fastest Sunday Mass in the Archdiocese of Louisville.

“They start at 10:30 and are out by 11,” said Tom Curley, who recently began coordinating the Sunday Mass at Christ Chapel. “It’s the best deal in town.”

The Masses are celebrated by retired priests on Sundays during spring and fall meets. The spring meet began April 29 and goes until July 4; there will be a September meet and the fall meet will run Oct. 30-Nov. 27.

The first Mass of the season was celebrated May 1, a day after the Spring Meet opened, though the track was quiet that day. Curley said the track never runs the Sunday before Derby, but the group still gathers. The Mass, celebrated by retired Father Leon Spalding, drew more than 50 worshippers.

Cliff Rompf has coordinated the weekly Mass at Christ Chapel since 2011, but the gathering has roots that stretch back to the 1980s.

“Buck Wheat was the ambassador on the backside and he deserves all the credit,” Rompf said in a recent interview, referring to Julian “Buck” Wheat, director of horseman’s relations, who died in 2011.

Rompf said Wheat’s efforts were supported by the late John Asher, who was vice president of racing communications, and Tom Meeker, former president and CEO of Churchill Downs.

Wheat organized Masses for Catholic employees to attend around their work schedule.

Tom Curley, a parishioner of Our Lady of Lourdes Church, was one such employee, who was asked about 15 years ago about being the lector for the backside Masses.

“I told them no, but I’ll get you one,” Curley said. He suggested his wife, Mary Jean, for the ministry, and then attending Mass at Churchill Downs became a family affair.

The liturgies draw an average of about 70 people, Curley told The Record, archdiocesan newspaper of Louisville.

Backside workers such as horse walkers and stable hands don’t usually attend the Sunday morning Masses because they’re often still working. Those employees are invited to attend nondenominational chapel services on Monday evenings or to attend Mass at Holy Name Church a half mile away.

Curley said he emails his coworkers at Churchill Downs to remind them about the Mass.

Barbara and Bob Weihe, parishioners of St. Francis Assisi Church, were invited by some friends to attend the backside Masses several years ago and they’ve been going ever since.

“We know a lot of people here, everyone is friendly,” Barbara Weihe said. “It’s always good to see everyone and nice that you don’t have to get up and down” to kneel.

Bob Weihe was gearing up to attend his 76th consecutive Derby May 7. He said his mother started taking him when he was young and he has found a way in every year since.

“Even during COVID,” Barbara Weihe said. “One of the owners our son knows invited us because he knew Bob had never missed a year.”

Some Massgoers are Turf Club members who attend Mass on their way to the track. Others are horse trainers and owners, like Rompf, local trainer Paul McGee and Chuck and Isla Weiting, members of St. Gabriel Church who used to race at Churchill Downs.

Everyone has a role, Curley said. He makes sure the chapel is set up and Mary Jean still serves as a lector.

Rompf stands at the back and counts how many people are in the congregation, then prepares enough hosts for consecration. He receives Communion last and, along with the presider, takes any leftover hosts because the chapel doesn’t have a tabernacle.

The Weitings count the collection at the end of Mass and give it to Rompf. The voluntary collection pays a stipend to the visiting priest and covers any operational expenses. When excess funds accrue, they’re donated to Churchill Downs in some capacity.

In 2021, the collection fund gave $1,800 to the Kentucky Race Track Chaplaincy, which operates a backside ministry. The donation was earmarked for the Permanently Disabled Jockeys Fund and the Backside Learning Center, Curley said.

“We got more money and needed something to give to,” Rompf said. “I took the position that all the money we’ve collected should stay on the backside.”

Bennett is a reporter with The Record, newspaper of the Archdiocese of Louisville.