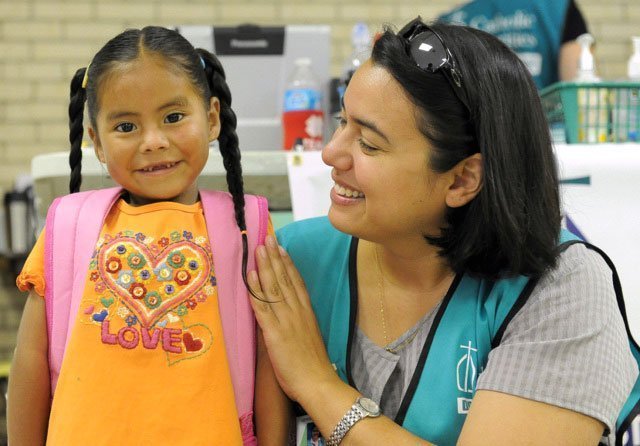 Sister Leticia Benavides of the Missionaries of Jesus, a counselor at Catholic Charities of the Rio Grande Valley, greets a happy immigrant girl at a respite center at Sacred Heart Church in McAllen, Texas. The girl had just taken a shower and put on clean clothes after a weeks-long journey from Central America to the center for immigrants.

MCALLEN, Texas (CNS) — "My family and I were on the wrong side of the political fence," said Rita of Honduras in Spanish. Her last name has been omitted for her safety. "We received death threats, we were detained by the police for absolutely no reason.

"Had we not left, I don’t know if we would have survived."

Rita is one of the more than 18,000 immigrants who have passed through the immigrant respite center at Sacred Heart Parish McAllen since it opened June 10, 2014.

The immigrants, mostly from Honduras, Guatemala and El Salvador, are dropped off by U.S. Immigration and Customs agents at the McAllen bus station a few blocks away from the church after being detained and processed. They are given a court date and granted permission to travel to their final destination.

Many of the immigrants were sleeping on the floor of the bus station and had no food or water. They hadn’t showered in days and sometimes, weeks. For about two months before the center opened, volunteers began taking food to bus station for the immigrants.

Sister Norma Pimentel of the Missionaries of Jesus, executive director of Catholic Charities of the Rio Grande Valley, heard about the situation and responded by opening the center in McAllen and for a few months, one in Brownsville on the grounds of the Immaculate Conception Cathedral.

The centers, which provided essentials such as food, clothing, water and a place to rest, were opened with the blessing and support of Brownsville Bishop Daniel E. Flores and the pastors from both churches.

Hundreds of immigrants came through the centers in those first days.

"I remember the day Sister Norma called Father Tom (Luczak, pastor of Sacred Heart Parish) and asked, ‘Can I borrow your parish hall for a couple of days?’" recalled Sister Leticia Benavides of the Missionaries of Jesus, a counselor and administrative assistant for Catholic Charities of the Rio Grande Valley. "Never did we imagine that we would be here a year later."

The number of immigrants coming through the center has fluctuated over the past year but the need for the center still exists.

"The center has been open every day since June 10 of last year and every day, people come in," said Eli Fernandez, director of the center. "We haven’t had a day where nobody has come in. The need is still there."

"We have kept our promise," Sister Benavides told The Valley Catholic, Brownsville’s diocesan newspaper. "From the very beginning we said, as long as there is a need, we will be here. It is also what Jesus calls us to do in the works of mercy — Matthew 25."

The staff and volunteers don’t know how many immigrants will walk through the doors on any given day. They usually receive notification from ICE when a group is already en route to the bus station.

"We’ve kind of learned to expect the unexpected and be ready for whatever comes our way," Fernandez said.

Religious leaders and volunteers of all faiths have answered the call to assist their brothers and sisters in need at the center.

The response to the influx of immigrants has garnered international attention.

Bishop Flores, who served on the board of Catholic Relief Services, visited Central America last Aug. 24-28 to learn more about the migration of so many children from Honduras and Guatemala to the United States.

Immigrants like Rita "will forever be grateful" for the center and the volunteers who cared for her.

After a 20-day journey, including a few days in ICE custody, she and her 2-year-old son arrived at the center Aug. 6, 2014. They stayed for a few hours as they waited to catch a bus to New Jersey.

"I left my parents and the rest of my family behind," Rita said. "I arrived in this country with nothing but the clothes on my back — and with a baby.

"My time at the center was a beautiful experience. We ate, we took a nice, warm shower, and we were given clean clothes to wear. We were welcomed like family," she continued. "It was the first time since I left Honduras that I felt hopeful and it was because of the love and care we received at the church. … Months have passed, but I have not forgotten the kindness and the compassion you all showed me and my son. I’ll never forget it."

Rita and her son are now settling into life in New Jersey and awaiting an immigration hearing to find out whether or not they will be allowed to stay in the United States.

In the first weeks of the center, media from all over the world descended on the Rio Grande Valley to cover the story about the centers and the influx of immigrants. Politicians, celebrities and high-ranking government officials also came through for a tour. Volunteers from all over the country also came down to help.

Today, volunteers are sometimes hard to come by and donations are way down. Sister Benavides appeals to people of goodwill in the Valley to give of their time to the center.

"The center may no longer be the news of the day, but the immigrant who came in June of last year and May of this year still has the same needs," Sister Benavides said. "Each person who walks through those doors needs a welcome smile, clean clothes, hot food and a place to rest. They need their dignity back. They need to be re-energized so that they may continue their journey."

Ybarra is assistant editor of The Valley Catholic, newspaper of the Diocese of Brownsville.