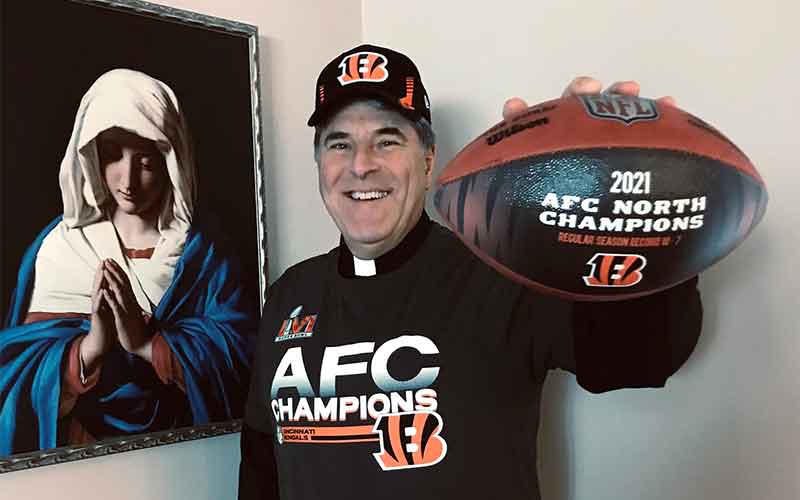 Father Tom Wray, Catholic chaplain of the Cincinnati Bengals, poses for a photo with the 2021 AFC North Champions ball Feb. 8, 2022. As part of his chaplaincy, Father Wray has conversations and provides spiritual guidance to those who work for the Bengals franchise. (CNS photo by Jessica Rinaudo/courtesy The Catholic Telegraph)

CINCINNATI (CNS) — With anticipation building for the Super Bowl, Cincinnati Bengals fans are preparing to cheer and pray for their team at the big game Feb. 13 against the Los Angeles Rams.

Count Father Tom Wray, Catholic chaplain for the team, among them.

Father Wray has served as the team’s chaplain for the past two years, “during the COVID era,” which has added extra challenges for the Catholic faithful of the Bengals’ franchise. Namely, most of the Masses he celebrates for the team have to take place via Zoom.

“The NFL requires that on Saturday evenings during the season that (the coaches, team and staff) are quarantined, so they’re not  to physically be at any vigil Mass and of course, on Sunday morning. … So the league tries to make available to them their Mass obligation,” said Father Wray, who is parochial vicar at St. Vincent Ferrer Parish in Cincinnati.

As part of his chaplaincy, Father Wray has conversations and provides spiritual guidance to those who work for the team.

“A lot of the time it’s coaches and staff just talking about what it’s like to be mentors and guides to these very gifted young elite athletes, and just the kind of pressure these athletes are under and then how to help them uncover the best version of themselves. And of course, that also means the supernatural dimension,” Father Wray told The Catholic Telegraph, Cincinnati’s archdiocesan newspaper.

In particular, Catholic players, coaches and staff are praying through the intercession of Our Lady of Victory this weekend. Prior to the team’s departure for California Feb. 8, Father Wray met with the team at Paul Brown Stadium in Cincinnati for prayer and a blessing.

He blessed medals of Our Lady of Victory for them to carry with them on their journey.

Come Feb. 12, the evening before the game, he will again celebrate Mass via Zoom. During his homily, he plans to encourage staff, coaches and players, and tell them to trust in God, no matter what.

“(I will tell them) God is my refuge. God is my strong rock. God prepared my mind for battle and we trust in him, and we release the outcome to him. And just make a gift of yourselves. Trust yourself. And love,” he said.

“Over and over again, you just hear how much these guys will lay down themselves for each other. You see it in the game. ‘I’ll take a hit for you. I’ll block for you.’ That’s very human. Very beautiful,” the priest added.

Vince Lombardi would say that “they prepared their entire lives for Sunday at 6:30 in L.A.,” he continued. “And they have to trust that they are exactly where they need to be and that this is who God made them to be, whatever their role is — some of them are very much support people. Not all are the top dog … but you know, they have very, very important roles.”

The Bengals asked Father Wray to spread the word that they would like the faithful to pray for them.

“We pray that God would grant their hearts’ desires and that their vocation, as coaches and players, that their gifts, their service would make them better disciples, better husbands, better men, better human beings or Catholics,” the priest said.

“And if in God’s wisdom, and his vocation for them, if victory at the Super Bowl will do that, that is absolutely moral and just for us to pray for victory.”

Rinaudo is editor of The Catholic Telegraph, newspaper of the Archdiocese of Cincinnati.