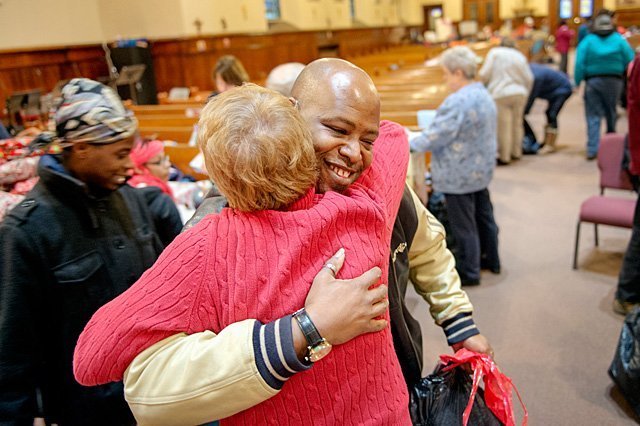 ROCHESTER — On Dec. 17, row after row of pews were filled at Holy Apostles Church — but not with people.

Those seats, as well as tables and sections of the church floor, contained bicycles, board games, soccer balls, bedding, clothes, coats and toys. The items slowly disappeared throughout the day as neighborhood residents gratefully claimed them.

Holy Apostles’ “Christmas Blessing Project,” an annual one-day giveaway, featured recipients coming in by appointment to choose gifts while being escorted by volunteers. Items were then brought to the front of the church to be wrapped by other volunteers. Participants in the giveaway also were invited to visit the parish’s food pantry, which provided turkeys, hams and other staples for holiday meals.

One woman clutching her gifts told a volunteer, “Thank you so much. I could use this because I’m not working, I don’t have a job.”

Meanwhile, project coordinator Betsy MacKinnon said another recipient is a grandmother on Social Security who’s caring for six children because her son and her daughter are both in jail.

And Father Tony Mugavero, Holy Apostles’ pastor, added that a young woman, Sophia Benitez, arrived at the church just a few hours after giving birth to a baby boy so as to not miss her appointment.

The effort to make a brighter Christmas for these and many other people was fueled by donations from Holy Apostles parishioners and several suburban parishes. McQuaid Jesuit High School provided a big assist as well: according to Christopher Hood, McQuaid’s Christian-service director, the all-boys’ school raised $4,000 for the project and also supplied 11 student volunteers that day.

Also playing into the event’s success were funds from the Catholic Courier/Catholic Charities Christmas Appeal, which raises money for the emergency funds of numerous agencies in the Rochester Diocese. Father Mugavero noted that out of the $800 in Christmas Appeal money allotted to Holy Apostles this past year, a large chunk went toward food for the Christmas Blessing Project.

As successful as this Christmas giveaway is, MacKinnon said she hopes for additional donors in future years because the huge demand outweighs what can currently be provided.

“Today we’ll probably serve close to 100 families, but we could triple that,” she remarked, adding with a laugh, “The rumor has gotten out (in the neighborhood) that we do this.”

Father Mugavero acknowledged that Holy Apostles has been challenged to keep up with the needs of the urban poor on Rochester’s west side, especially since numerous area Catholic parishes have closed in the past decade.

“Our geographic territory has grown tremendously,” he said.

Yet the 130-year-old church on Lyell Avenue still finds many ways to be a beacon of hope in a region that’s chronically hampered by poverty, crime and drugs. In addition to the Christmas Blessing Project, Holy Apostles provides for residents’ needs through its clothing closet, food pantry and such ministries as faith formation and Hispanic outreach that are housed at the parish’s Mother Teresa Missionary Center.

The parish also emphasizes hospitality, featuring a Youth House and hosting ice cream socials, picnics and monthly dinners. MacKinnon noted that evangelization plays into all of these efforts; for instance, each bag of gifts from the Christmas Blessing Project contains a prayer card.

More often than not, folks served by Holy Apostles are not parishioners or even Catholic. Even so, MacKinnon — a parish volunteer who coordinates several outreach efforts — observed that residents express over and over how grateful they are for the church’s presence.

“‘You don’t know me, but you love me.’ We hear that all the time,” MacKinnon said.