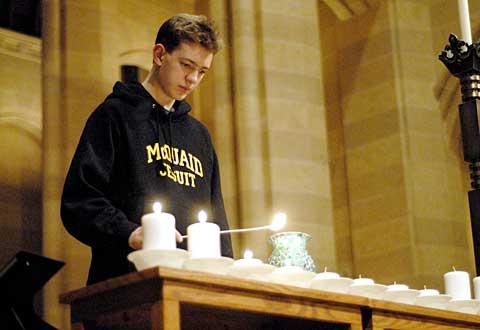 Kyle Padden lights a candle after reading a Sikh prayer for peace Jan. 24 during a teen prayer vigil at Sacred Heart Cathedral.

ROCHESTER — When 17-year-old Anthony Turner was gunned down outside a city home early the morning of Nov. 1, 2009, siblings Emily Gibson, 14, and David Gibson, 17, knew they couldn’t stay silent anymore. Anthony had attended East High School with the Gibson siblings, and the home he died in front of belonged to someone they knew from the Cathedral Community Youth Group.

Emily, David and other members of the Cathedral Community Youth Group decided they had to do something to try to stop the violence that plagues their neighborhoods. With the help of Belinda Brasley, the Cathedral Community’s youth-ministry coordinator, the teens decided to hold a Teen Prayer for Peace, which took place at Sacred Heart Cathedral on the rainy evening of Jan. 24.

The lighting in the cathedral was dim that night, indicating the solemnity of the occasion. The mood of the approximately 50 people gathered there, however, was light. The teens and adults in the audience smiled as they murmured to one another before the event began.

Father Edison Tayag, parochial vicar of the Cathedral Community, opened the service with a welcoming speech.

"Our gathering today is inspired by the youths’ concern over the violence in our city," Father Tayag said. "We sense more clearly than ever, as individuals and in community, the duty to commit ourselves to the defense and promotion of the universal good, which is peace."

The service was inspired by Peace Seeds, a series of prayers for peace prayed in Assisi, Italy, on the Day of Prayer for World Peace in 1986. Peace Seeds included one peace prayer apiece from many of the major religions around the world, including Christianity, Islam, Judaism, and Native American and African traditions.

The Teen Prayer for Peace followed suit by participating in a series of 10 of these prayers. Each prayer was led by a different member of the Cathedral Community Youth Group. One by one the teens stood in front of the congregation, read one of the selected prayers and lit a candle. The congregation then joined two cantors in a sung refrain.

Brasley then explained how her youth-group members felt in the wake of Anthony’s death and why they felt the need to take action.

"Members have experienced being chased and bullied and threatened themselves, and have faced the horror of their families being hurt," Brasley said. "All of you who are here tonight have come to say no more to the violence, the knifings, the killings on our streets. We come here to align ourselves with all people of faith all over the world."

During the event’s planning process, Brasley said the youth-group members decided they wanted to give participants something concrete to symbolize their commitment to action and peace, so they decided to give out stones. At first, Brasley thought they should do something more elaborate, until she thought more about stones, which can either be used to further violence or to build bridges.

"Then I started thinking about … the ripple effect they have when thrown into the water," Brasley said.

Like the stones, each person’s actions also have ripple effects, and individuals must choose whether they will act to further peace or to further hatred and violence, she said.

"You are one person, holding one stone, and your actions will cause ripples among your friends, your school and out into the city," Brasley said.

After Brasley’s reflection everyone was invited to take a stone to symbolize their commitment to making their own lives more peaceful. The teens strode enthusiastically to the front of the church to gather their stones and declare their dedication. The adults in attendance walked to the bowl of stones more slowly and contemplatively than the youths before them.

The evening culminated with a sign of peace, during which each participant was encouraged to extend their greeting to two people they did not know.

After the service, David Gibson told the Catholic Courier that teens need to be just as involved as adults when it comes to solving the problem of urban violence. He said he hoped the service would show the community that teens are passionate about and interested in the issue.

"The message I heard was good," remarked Kelsey Wynne, 17.

"Something needed to be done (about the violence)," agreed Katrina Hossenlopp, 16.

Fellow youth-group member Kristie Wood, 17, said she liked the way the service incorporated various religions. Everyone has a responsibility to work to end violence, she said.

"It’s not just a Catholic thing. It’s everyone," Kristie said.