Clash of the Titans - Catholic Courier 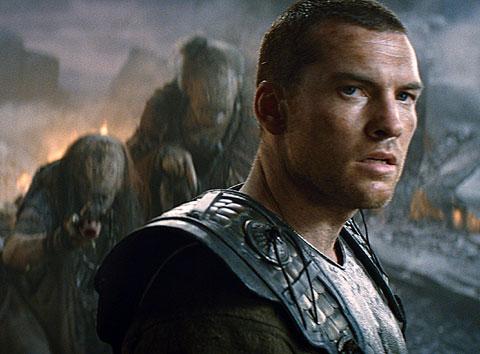 NEW YORK (CNS) — Though hardly a favorite with critics — the USCCB Office for Film & Broadcasting, for example, termed it "languid and hopelessly episodic" — Desmond Davis’ 1981 swords-and-sandals exercise, "Clash of the Titans," was a box-office hit on its initial release and has gone on to become something of a cult classic. Perhaps that’s the impetus behind director Louis Leterrier’s 3-D remake (Warner Bros.) which retains the original title.

Whatever the motivation, the result is a muddled mythological epic in which long, frequently violent action sequences and an emphasis on special effects leave little room for engaging drama.

Like the original — and like the current, exhaustingly titled children’s film "Percy Jackson & the Olympians: The Lightning Thief" — this is a retelling of the ancient Greek myth of the demigod Perseus (Sam Worthington). The offspring of one of Zeus’ (Liam Neeson) characteristic dalliances with a beautiful mortal — portrayed here in a discreet flashback — the infant Perseus and his mother are both cast into the sea by her enraged cuckolded husband, Calibos (Jason Flemyng). This despite the fact that Zeus had temporarily disguised himself as Calibos for the encounter. So how was poor Mom to know?

Unlike his mother, Perseus survives, and is rescued and raised by the family of a simple fisherman. As a teen, however, Perseus is left orphaned when his entire clan is killed off during a rampage by Hades (Ralph Fiennes), the god of death.

Hades has been unleashed by his brother Zeus, the king of the gods, to wreak havoc on humanity for their growing dissatisfaction with, and attempted rebellion against, the whole pantheon of Olympian deities.

Determined to defend humankind and gain vengeance on the lord of the underworld, Perseus embarks on a quest that sees him and a small band of hardy companions — including his immortal spiritual guide and intrepid comrade Io (Gemma Arterton) — battling giant crabs, the Medusa, an ubermonster called the Kraken and, eventually, Hades himself.

Though the theme of a human revolt against the divine — even in its debased pagan form — is potentially troubling, the collaborative script by Travis Beacham, Phil Hay and Matt Manfredi treats the subject so inconsistently that audiences will be hard put to draw any direct analogies or arrive at any definite conclusions.

Characters display a variety of reactions to the uprising, ranging from outright defiance — "We are the gods now!" declares one — to fearful submission to quiet, sensible piety and on to the rabble-rousing attitude and activities of a religious fanatic who pops up in a few scenes.

But weighty matters like theology are hardly the point here, as it’s never long before the next in Perseus’ formidable succession of adversaries takes center stage, and combat is renewed. Munching away on their popcorn, undemanding viewers will likely be content enough with the proceedings not to notice the gifts of top-tier players such as Fiennes and Neeson being squandered on stilted dialogue.

The film contains complex, though undeveloped, religious themes, constant action violence, some of it bloody or gruesome, a bedroom encounter with implied sexual activity, at least one sexual reference and a couple of mildly crass terms. The USCCB Office for Film & Broadcasting classification is A-III — adults. The Motion Picture Association of America rating is PG-13 — parents strongly cautioned. Some material may be inappropriate for children under 13.

– – –
?
Mulderig is on the staff of the Office for Film & Broadcasting of the U.S. Conference of Catholic Bishops. More reviews are available online at www.usccb.org/movies.