Clean of heart: Turning back to God - Catholic Courier 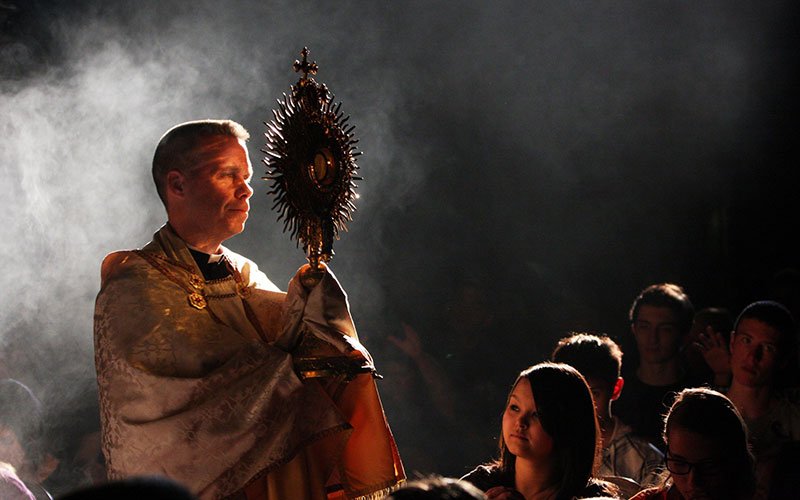 Father Brian Barr presides at eucharistic adoration during a prayer service for vocations at Immaculate Conception Seminary in Huntington, N.Y., in 2012. Jesus speaks to our hearts in his Real Presence in the celebration of the Mass and in the silence of eucharistic adoration. (CNS photo by Gregory A. Shemitz/Long Island Catholic)

This is the sixth installment in a series on the Eight Beatitudes. This week discusses the sixth beatitude: “Blessed are the clean of heart, for they will see God.”

I, like many of my more distractible friends, have often had the experience of looking for something — a pen, perhaps, or a pair of sunglasses — that I was certain I’d misplaced, only to discover that the object in question was actually in my hand, on my head or sitting right in front of my face.

It’s a common mistake, but no less embarrassing for however many times it’s happened to me over the years.

I’ve found, however, that the awkwardness of misplacing a household object is really quite trivial compared to the loss felt in missing out on the presence of God himself when he acts right in the middle of my everyday life.

Although the sixth beatitude promises us that the pure of heart will have the privilege of seeing God, we might be surprised to learn that not everyone has always found this idea attractive.

In the Old Testament, tradition held that to gaze on the face of the Lord was tantamount to a death sentence; despite his intimate friendship with God, Moses himself was forced to hide in the cleft of the rock and see only the Lord’s back as he passed by.

In the Gospels, however, Jesus turns this fear on its head by offering himself as a perfect and merciful mediator, a new means to see and know the Lord. He promises the apostles, “Whoever has seen me has seen the Father” (Jn 14:9). To see the Son is to see the Father who dwells in him, and to be friends with one is to be friends with the other.

Our own journey with the Lord comes with its share of moments of both fear and intimacy, beginning with the fundamental task of noticing how he’s even active in our lives in the first place.

There are plenty of ordinary distractions and obstacles to perceiving God’s presence, but to use the image of the beatitude, nothing contaminates the purity of our hearts or leaves us blinded quite like sin.

Sin, the Catechism of the Catholic Church warns us, inevitably clouds our judgment and distorts our ability to perceive the good. Sin, more than any other outside influence, makes it difficult to “see” God in our lives, to recognize his invitations to friendship and to discern his will.

I found this to be especially true in the first years of my own journey with God. One of the earliest experiences I can remember of directly recognizing the Lord’s voice and action in my life occurred in my early college years on a weekend student retreat.

Among the significant graces I received during that time, the one moment that truly “opened my eyes,” so to speak, was making one of the first good confessions of my life with one of our priest chaplains.

Returning to prayer after receiving the graces of the sacrament felt like finding my sunglasses sitting on top of my head: a bit of embarrassment for having missed the truth for so long, but far overshadowed by the joy of actually recognizing God’s love.

That singular grace of seeing the Lord act in my life would become the foundation for my future life of prayer and my later discernment of my vocation to the priesthood.

The particular details of our encounters may differ, but as Catholics, we all have the privilege of seeing God moving in our lives firsthand. Of all the places we could look for his presence, nothing can compare to the power of Jesus Christ present in the sacraments of his church.

He speaks to our hearts in his Real Presence in the celebration of the Mass and in the silence of eucharistic adoration. He speaks his words of forgiveness and absolution to open the eyes of our souls in the sacrament of reconciliation. I am sure many of you have experienced these graces.

It’s not uncommon for our spiritual lives to go through phases and periods of great enthusiasm, alternating with times of dryness or temptation to indifference.

Among the most difficult to endure, however, can be those times when we realize we have drifted away from our relationship with God and allowed sin to lead us far from the path on which he was leading us.

Turning our eyes back to him really can be as simple and as humbling as turning back to these founts of grace that the church has given us in the sacraments.

Still, it can be all too tempting to give in to the fear that if and when we return to stand before the Lord, we’ll be the ones struck dead, if not by his wrath, then by the monumental shame of our failure.

The reality is quite the opposite: When we allow Jesus to remove the clouds from our vision and restore us to purity of heart, the only thing we will see before our eyes is the gaze of his mercy, waiting right where he has always been — right in front of us.

(Father Cassidy Stinson is a graduate of Theological College in Washington and was ordained for the Diocese of Richmond in 2019. He currently serves as a parochial vicar at St. Bede Catholic Church in Williamsburg, Virginia.)