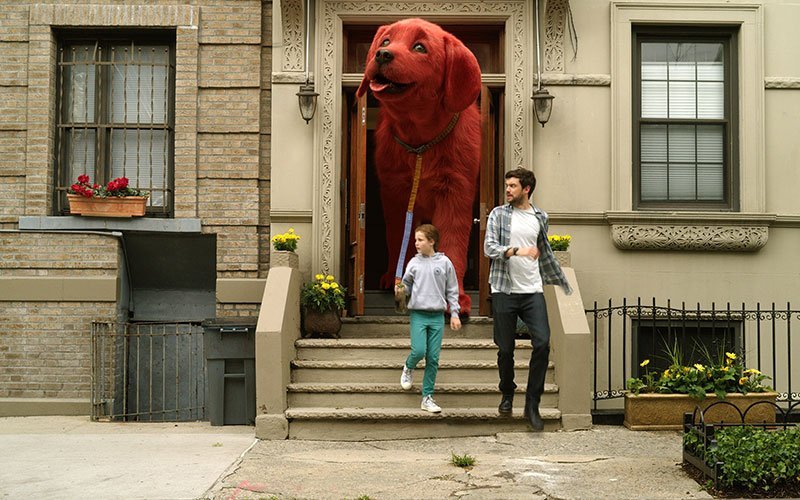 Darby Camp and Jack Whitehall star in a scene from the movie "Clifford the Big Red Dog." (CNS photo by Paramount Pictures)

NEW YORK (CNS) — Given that it charts the rapidly deepening bond between a kid and a pooch, “Clifford the Big Red Dog” (Paramount) would not, presumably, be a film designed to please the great comedian W.C. Fields.

Less curmudgeonly types, by contrast, will find this adaptation of a series of children’s books by Norman Bridwell, the first of which was published in 1963, silly but mostly harmless.

The news that her Uncle Casey (Jack Whitehall) will be baby-sitting her while her busy mom, Maggie (Sienna Guillory), is away on a business trip does nothing to brighten Emily’s mood. A slacker who lives in a dilapidated truck, Casey is affectionate but irresponsible.

When, however, she and Casey cross paths with eccentric animal rescuer Mr. Bridwell (John Cleese) — named, of course, in honor of the author — and he introduces her to an irresistible little puppy, Emily perks up considerably. It’s love at first sight for the affection-hungry lass.

Significant complications arise the following morning, though, when Emily awakens to discover that her tenderness toward Clifford has magically transformed him, overnight, into a giant. As Clifford innocently wreaks all manner of slapstick havoc, Emily and Casey find themselves contending with a series of adversaries.

Uncle and niece do, at least, have a reliable ally in the person of Owen (Izaac Wang), a diminutive schoolmate of Emily’s who harbors a not-very-well-concealed secret crush on her. Various residents of Emily’s Harlem neighborhood also rally round the duo.

Among the themes highlighted in Jay Scherick, David Ronn and Blaise Hemingway’s screenplay are the need to accept those who are different, the dangers of bullying and the value of self-confidence. Yet these messages are not put across very adroitly.

They’re also offset by some potty gags and a bit of vaguely rude dialogue. So the parents of real-life members of Emily’s demographic may want to think twice before greenlighting an encounter with the world’s most famous big red dog.

The film contains a few scatological jokes and a couple of instances each of mild swearing and crass talk. The Catholic News Service classification is A-II — adults and adolescents. The Motion Picture Association rating is PG — parental guidance suggested. Some material may not be suitable for children.