Close to 12,200 pray for Pelosi’s ‘change of heart’ on abortion - Catholic Courier 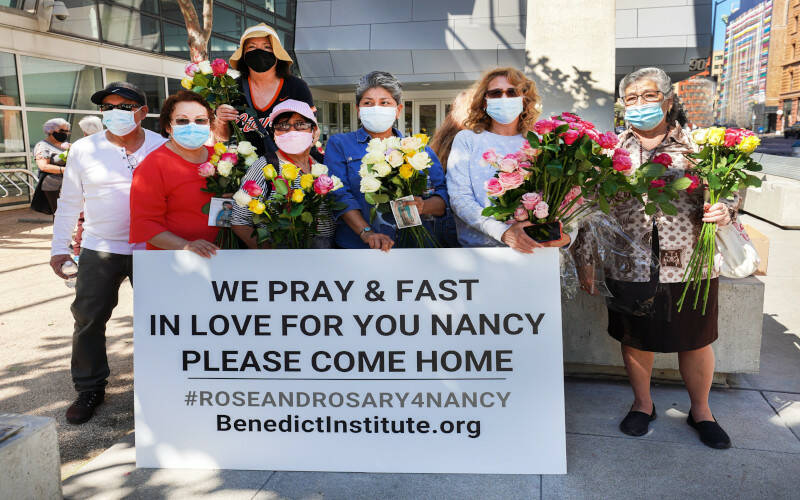 People in San Francisco deliver roses to House Speaker Nancy Pelosi’s office in California Oct. 1. Each of the roses represents one Catholic praying a rosary and fasting on Fridays through October for Pelosi’s “change of heart on abortion.” (CNS photo by Dennis Callahan)

WASHINGTON (CNS) — Close to 12,200 people in the Archdiocese of San Francisco have joined the “Rose and Rosary for Nancy” campaign launched by Archbishop Salvatore J. Cordileone to urge prayers for a “change of heart” for House Speaker Nancy Pelosi on abortion.

The California Democrat, a Catholic who supports legal abortion, represents California’s 12th Congressional District, which is entirely within San Francisco.

Participants joined the campaign by signing a petition at BenedictInstitute.org, and for each signer a rose was sent to Pelosi’s office as a symbol of their “prayers and sacrifices.”

“This is a critical time in our country when we especially need to pray for our political leaders as we see our country moving more and more in the direction of the culture of death,” Archbishop Cordileone said in a new YouTube video ad calling on more Catholics and other people of goodwill to join the campaign.

“Our leadership is very important so I invite you all to join me in prayer and sacrifice for the Speaker of the House Nancy Pelosi from here in San Francisco,” he added.

The rose is a symbol of St. Therese of Lisieux, the “Little Flower,” and of Mary, the “mystical rose,” Archbishop Cordileone has noted.

“Roses have been called St. Therese’s ‘signature,’ a sign that the petitioner’s prayer has been heard,” he said in an earlier statement. “At this particular moment in the history of our nation, we need more than ever the intercession of our Blessed Mother, St. Therese and all other saints who have shown us the path to life.”

The Benedict XVI Institute, which is coordinating the effort, committed $50,000 for a nationwide marketing campaign using digital and radio ads, including on Relevant Radio.

“I am asking Catholics to commit to pray and fast for conversions of hearts for members of Congress,” the archbishop said in the ads.

It codifies the U.S. Supreme Court’s 1973 Roe v. Wade decision legalizing abortion nationwide. The measure establishes the legal right to abortion on demand at any stage of pregnancy in all 50 states under federal law.

To become law, the Senate would need to pass its version of the measure and then it would go to President Joe Biden for his signature.

“A conversion of heart of the majority of our congressional representatives is needed on this issue, beginning with the leader of the House, Speaker Nancy Pelosi,” Archbishop Cordileone said in a statement Sept. 29.

Ahead of the House vote on H.R. 3755, Archbishop Cordileone called the measure “nothing short of child sacrifice.”

At a Sept. 23 news conference, Pelosi defended her actions on abortion.

“It’s none of our business how other people choose the size and timing of their families,” she said in response to a question from Erik Rosales, Capitol Hill correspondent for EWTN News Nightly.

She said she and Archbishop Cordileone “had a disagreement about who should decide this. I believe that God has given us a free will to honor our responsibilities.”

On Oct. 9, Pelosi had a private meeting with the pope; she was in Rome to speak at a meeting of legislators from around the world in preparation for the U.N. climate summit.

The Vatican released photos of Pelosi’s meeting with the pope, but provided no details of the encounter, which took place before Pope Francis addressed the Pre-COP26 Parliamentary Meeting.

“It was a spiritual, personal and official honor to have an audience with His Holiness Pope Francis this morning,” Pelosi said in a statement afterward. “His Holiness’ leadership is a source of joy and hope for Catholics and for all people, challenging each of us to be good stewards of God’s creation, to act on climate, to embrace the refugee, the immigrant and the poor, and to recognize the dignity and divinity in everyone.”

At least one commentator speculated that Pope Francis had changed his mind about the church’s teaching on abortion: the host of Newsmax TV’s “Chris Salcedo Show,” according to a Catholic News Agency story.

But as CNA reported, Archbishop Cordileone urged “some caution in jumping to that conclusion” and noted Pope Francis, like popes before him, meets with all kinds of political leaders.

When he launched the rosary and fasting campaign for Pelosi, Archbishop Cordileone noted that the congresswoman “speaks fondly” of her five children; she also has nine grandchildren.

“She clearly has a maternal heart,” Archbishop Cordileone said. “Pope Francis has called abortion murder, the equivalent of hiring a hitman to solve a problem. The solution to a woman in a crisis pregnancy is not violence but love.”