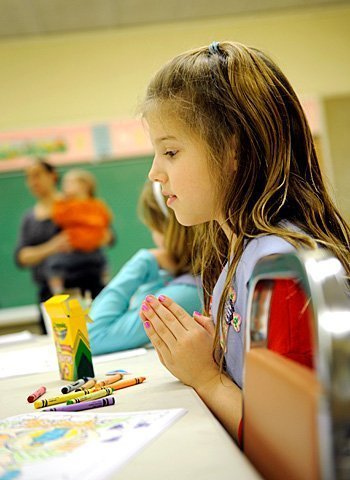 Eight-year-old Adison Roberts joins her friends in prayer at the end of a Feb. 15 meeting of the Little Flowers Girls Club at Waterloo’s St. Mary Church.

WATERLOO — Eight-year-old Evelyn Balzer has spent the past few months learning about the Catholic Church through the Rite of Christian Initiation for Adults, and she’s looking forward to entering the church later this month during the Easter Vigil.

She’s not waiting until the vigil, however, to get involved in her parish, St. Francis and St. Clare Parish in Waterloo and Seneca Falls. Already she’s an active member of the parish’s Little Flowers Girls Club, and boasts a sash full of colorful badges to prove it.

"I learned about the Little Flowers when I went to church. At that time I was just starting to become Catholic, and I wanted to do more with the Catholic community," Evelyn explained.

The Little Flowers Girls Club is a Catholic program that was founded 20 years ago by a Catholic mother in Baltimore. The program helps girls who are 5 years and older to learn about Catholic virtues by exploring Scripture, the Catechism of the Catholic Church and the lives of Catholic saints. Ecce Home Press began publishing the program materials in 1999, and Little Flowers groups have sprouted up across the United States.

The program provides girls with an opportunity to learn more about their Catholic faith while having fun and forming friendships, said Brittany Bruning, leader of the 14 girls in St. Francis and St. Clare’s Little Flowers group.

"They do maybe five or six different activities to help them learn about each virtue. One of them is always a memory verse with a song," Bruning said. "Once we complete a unit they earn a little badge that they sew on a sash, kind of like the Girl Scouts would do, but with a little different focus."

The Feb. 1 Little Flowers meeting began as most of the groups’ meetings do: the girls recited several prayers before singing a prayer to St. Theresa, who is known as "the Little Flower." After praying and singing, the group members usually learn about the life of a saint who displayed the virtue being discussed that week and do at least one related craft. On Feb. 1, the girls sang a song about piety, the virtue they learned about in January and February, and reviewed the story of St. Cecilia, whose life illustrated the concept of piety, Bruning said.

Little Flowers members also have learned about faith, hope, love of God, love of neighbor and obedience. Nine-year-old Julianna Struzik said love of neighbor is her favorite virtue so far, and said it’s a fitting virtue for girls in a Catholic club to have. Bruning said the unit on obedience also was particularly popular with the club members.

"We talked about confession. I would never have guessed, but they really were very interested in learning about their souls and how to keep their souls clean," she said.

After singing about piety, the Little Flowers members reviewed the story of St. Cecilia and discussed the ways she showed piety and devotion to God. The girls can show their own devotion to God by participating in Mass, attending eucharistic adoration, helping others and praying frequently. To help them in their quest for piousness, the girls made prayer books out of paper bags stapled together. They decorated the covers of their prayer books, selected prayers to glue onto the inside pages, and talked about what kinds of holy cards and religious medals they could put into the pockets in the backs of their books. Bruning encouraged them to use the books to enter into quiet prayer.

Jamie Bruning, 11, is one of the group’s older members and helped the younger girls sitting nearby put their prayer books together. Jamie said she was excited when her mother took over the group in the fall of 2011.

"I thought it would be like Girl Scouts, except Catholic," Jamie explained. "I like learning about the saints and reading about them."

Reading the stories of saints’ lives is one of the highlights of each meeting for 9-year-old Cadance House, 8-year-old Paige Saracino and 7-year-old Evalyn Penley. For 7-year-old Miranda Dwello and 8-year-old Adison Roberts, however, making the crafts is the best part of each meeting. Hannah Penley said she especially enjoyed making angels out of tissue paper.

"They look like stained glass when you put them up to the light," explained Hannah, 9.