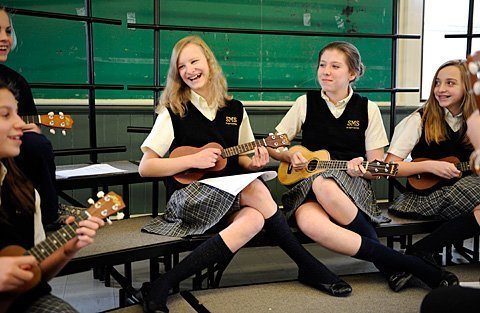 St. Mary School seventh-graders Rachael Derby (from left), Katherine Johnson and Jaimie Chapin laugh with their classmates during a meeting of the school’s Ukulele Club Jan. 17. Click here to view a video about the Ukelele Club.

It’s lunchtime on a Thursday at St. Mary School in Canandaigua. A visitor to the school would hear the expected sounds of children eating, talking and laughing, but also might notice the more surprising strains of ukulele music emanating from one of the classrooms.

No one at the school seems particularly surprised about this, however.

That’s because on Thursdays, lunchtime also is practice time for St. Mary’s Ukulele Club. Its members gather in a classroom with the school’s general music teacher, Alexandra Vasilius, to eat lunch, hone their skills and talk about ukuleles.

"Bell choirs are a dime a dozen, but how many schools have ukulele choirs?" Vasilius asked with a laugh.

"I think it’s really fun because it’s an opportunity that’s kind of unique to our school," added seventh-grader Katherine Johnson, who joined the club when Vasilius started it in September.

The club now has 10 members; all girls in the school’s sixth, seventh and eighth grades who are excited about learning to play the ukulele. Vasilius herself only learned to play the ukulele after she started teaching at St. Mary in September 2011.

"I walked into the classroom and I had about 20 ukuleles sitting there, so I said to myself, ‘I guess I’m going to learn how to play the ukulele and teach the kids.’ It’s always fun to grow as a musician and a teacher," she said.

The ukulele is relatively easy to master, especially compared to other instruments like the guitar, said Vasilius, a veteran flute player who recently has been learning to play the guitar as well.

"I just went to the store and bought a method book for myself. It’s actually the same book I use with my students," Vasilius said. "Now that I have the Ukulele Club, that’s pushing me to learn more about the ukulele and ukulele technique."

Vasilius decided to form the Ukulele Club because a lot of students responded enthusiastically to the ukulele unit she taught during the 2011-12 school year. Not only is the ukulele fairly easy to play, but it’s also a very versatile instrument that is relatively inexpensive, she said. Most of the students in the club borrow the school’s ukuleles, but a few have purchased their own instruments. Ukuleles have become more prevalent in popular music in recent years, so kids have become much more familiar with and knowledgeable about the ukulele’s distinct sound, Vasilius said.

"It’s a social instrument, and I think they’re attracted to that. It’s easy to bring with you pretty much anywhere you go," she said. "You can sit around a campfire with your friends, you can bring it on a vacation and play it on the beach."

The ukulele’s portability and versatility, combined with the ease with which it can be picked up, make it an instrument that’s very accessible to music lovers of all skill levels. This in turn gets a whole new demographic of people involved in making music, she said. Some people mistakenly think only the songs they hear on the radio or at a philharmonic orchestra’s concerts can be considered real music, so they’re too intimidated to even pick up an instrument and try to master it, Vasilius said.

"Real music is sharing music with your family and sharing it with others, even in its simplest form. The ultimate goal of Ukulele Club is for the kids to enjoy music that they can make on their own, and not feel like they have to be concert violinists or not simply listen to songs they hear on the radio," she said.

Creating music is about cooperation as well, and the Ukulele Club is a great way to encourage cooperation and peer interaction, Vasilius added.

Playing the ukulele is a lot more fun when it’s done with friends, agreed sixth-grader Claire Keck, who joined the Ukulele Club with her two best friends. Claire said she loves music and had been wanting to learn to play an instrument, so she was excited when she heard Vasilius was planning to start the club.

"Ukuleles aren’t really an instrument that very many people would think that’s what they’d want to play, but it’s actually really fun, and it’s just like a guitar," Claire said. "My sister and my brother both play piano. I wanted to learn to play an instrument, too, and I think my parents are happy that I’m able to play an instrument."

Katherine, who has her own ukulele at home and also plays the guitar, said her favorite part about Ukulele Club is learning to play new songs. "Skip to My Lou" is a particular favorite for both Katherine and Claire, the girls said.

"People should know that the ukulele, it’s sort of hard at first, but once you get the hang of it, it’s actually pretty easy," Katherine said.