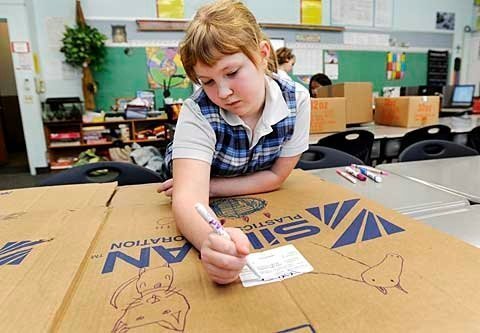 Third-grader Stephanie Gilbert decorates boxes to be used for pet donations during a Jan. 25 meeting of the Hands in Paws Club at Seton Catholic School in Brighton.

On the surface these items don’t seem to have much, if anything, in common. Each one, however, is an integral part of an extracurricular club at a Catholic school within the Diocese of Rochester. Local Catholic schools offer a broad range of clubs and activities to enrich their students’ educational experiences.

Twenty-two members of the Hands in Paws Club at Seton Catholic School in Brighton, for example, regularly gather after school to make toys, treats and pet beds for the animals awaiting adoption at the Humane Society at Lollypop Farm in Fairport. Fifteen other Seton students, meanwhile, belong to A Hug Around the Neck Knitting Club and meet after school every other Thursday to knit scarves for refugees at Saint’s Place, a Pittsford-based refugee relocation ministry.

Hands in Paws and A Hug Around the Neck are somewhat unique in that both clubs were founded by students, noted Seton’s principal, Martin Swenson. Fifth-graders Grace Taylor, Lily Ryan and Abby Hentschke were just hanging out at recess one day when they decided to form a club, said Grace, 10.

"At our age when you’re bored you just make clubs," she explained.

They decided to dedicate their club to helping animals in need, since all three girls really care about animals. After getting permission from their teacher, their principal and their parents, the girls scheduled their first club meeting for Dec. 24. At that meeting, they made chew toys out of braided strips of felt and created cards to send home with adopted animals and their new owners. At the club’s next meeting they made pet treats, and they’ll probably make pet beds at their third meeting, Grace said.

A Hug Around the Neck also was formed earlier in this school year, when third-grader Chloe Phelps decided to share her love of knitting with other students. She received a loom for Christmas two years ago and quickly learned she loved to knit scarves. In the fall she decided to recruit a few of her fellow students to help her make scarves for Saint’s Place.

The club’s first goal was to make 20 scarves by Thanksgiving, and its members ended up making 33 scarves and delivered them to Saint’s Place in late November, said Chloe, 8.

"It’s a great chance to show the kids an idea can actually turn into something, no matter how old you are," added her mother, Terri Phelps.

Students at St. John Neumann School in Rochester cultivate new ideas about science through the school’s popular Science Wizard’s program, where they do experiments and projects related to such topics as space exploration, fossils and botany, said Ivana Ripley, office assistant at the school. The Recorder Club at All Saints Academy in Corning also makes learning fun, said music teacher Kathy Broderick.

"It’s a fun club, so we’re trying to extend our skills in it and learn different types of music," Broderick said.

Club members learn how to read notes and music, and pick up new skills amazingly fast, she added.

"They’re like little sponges, especially when they’re in the club. It’s because it’s their choice to be there," Broderick said.

The students take pride in their new skills, as do the members of the Bowling Club at St. Mary School in Canandaigua, said Coach Dave Sheppard, noting that the 26 club members wear their club T-shirts with pride. The club is open to students in kindergarten through eighth grade, and teams are formed based on grade levels. Each team plays every other team, however, so the older and younger kids frequently interact.

"The older kids have always been great at helping out the younger kids. They have a blast," Sheppard said. "When a little one rolls a strike or a spare, they smile from ear to ear."