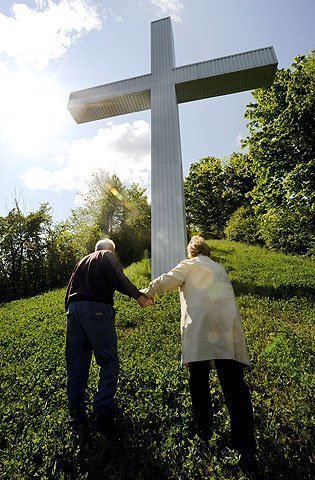 Santo Montemorano (left) and his wife Sylvia climb a hill that leads up toa 60-foot metal cross on their property in Clyde May 17.

A dream began to take shape in Santo Montemorano’s mind several decades ago while he was digging a gravel pit for his family’s gravel business in Clyde. The deep pit eventually would become a large pond next to a countryside hill, and he thought the hillside would be an ideal place to erect a cross in memory of his parents, Michael and Tina Montemorano, and in honor of Christ’s sacrifice for all of mankind.

"I had that in my mind all the while we were mining that lake," Santo Montemorano said.

It’s now been two years since that dream became a reality, and a 60-foot metal cross was erected on the hillside in the former quarry. The cross is visible from Lock Road in Clyde, and quite a few people stop along the road to look at it, he said.

"It’s really impressive. It reflects on the water, and it looks like it’s coming out of the water," he said.

Santo Montemorano had talked about the project for years, according to his son, Bob Montemorano.

"When I was a teenager, so 40 years ago, he would say, ‘We’re going to put something up there in honor of what my parents did and to remind you guys how you got here," Bob Montemorano recalled.

Several years ago, Bob Montemorano started researching ways to bring his father’s dream to fruition. He got in touch with Jim Potter, a Tennessee man who has helped design many of the large crosses that can be found along interstate highways throughout the country, and Potter and Tennessee-based Cornerstone Engineering Inc. provided the preliminary plans for the cross. The Montemoranos worked with a number of other local companies to finalize the plans and prepare the site. Many of the individuals and companies involved in both the planning and the construction phases of the project either donated their time or gave the Montemoranos substantial discounts, Bob Montemorano said.

The finished cross is made of steel covered by sheet metal, and weighs about eight tons. Once the 40-ton concrete foundation was complete and the base of the cross had been set securely, large cranes were used to drop the top portion of the cross into the base on Oct. 18, 2010. That October was one of the rainiest in recent memory, and the construction site received more than five inches of rain in the weeks leading up to the placement of the top of the cross, according to the Montemoranos.

"It was very wet. When you’re going up a hillside and trying to bring this much weight and metal up there and create shelves for trucks and cranes, it’s tough," Bob Montemorano said.

Bob Montemorano spread straw over the muddy hillside in an attempt to make things easier for the construction crews and their equipment. That plan worked beautifully until a welder’s stray spark landed on the straw underneath the cross, he recalled.

"The entire hill went up in flames. They thought it was some sort of thing from heaven. To this day they still talk about that," he said. "It was an eventful construction that none of us would ever care to go through again."

Erecting the cross was a complicated and challenging undertaking, but many of the Montemorano’s family members and neighbors pitched in and helped bring the project to completion.

"The people came out of the woodwork to help. There were 30 to 40 people without whom we probably couldn’t have pulled it off," Bob Montemorano said. "That’s how you do things like that. Everyone did what they could do, and all of a sudden it’s up and there it is. We were thunderstruck when we saw what we had done."

The cross is awe-inspiring, he said. It’s best viewed from across the pond, where the Montemoranos have put up a plaque explaining why they built the cross there. They built it in recognition of Michael and Tina Montemorano’s unwavering faith in God and their reliance on Jesus’ teachings to guide their daily lives as they immigrated, persevered and worked hard to successfully raise their family.

"It’s a reminder for us and future generations that we wouldn’t have gotten anywhere if our grandparents hadn’t had this faith-based approach to life. It’s gotten us through a lot of hard times. It’s a monument to Christ’s sacrifice, not a monument to my grandparents," Bob Montemorano said.

The cross now has graced that Clyde hillside for two years, but it still makes Bob Montemorano pause and reflect every time he passes it.

"It makes you think, what are you worried for? Every time you go by you have to look and it makes you think, you know, things aren’t so hard," he said. "If you’ve got somebody who was able to sacrifice that for you, what problems have you got?"