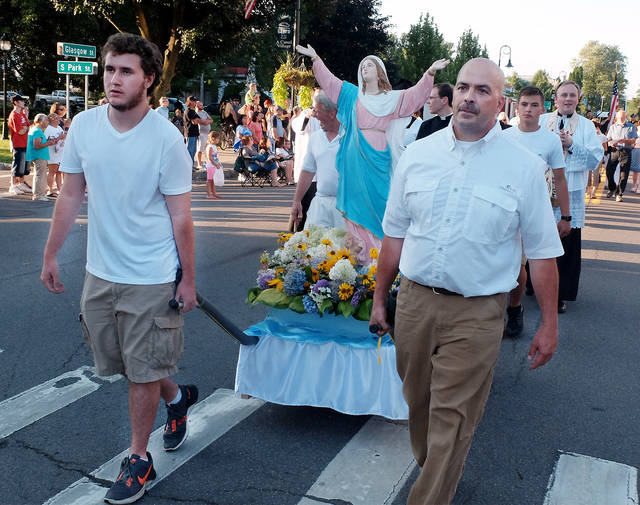 Avery D’Amato waits to release balloons during the Marian procession that was at the beginning of the Clyde Fire Department parade Aug. 12 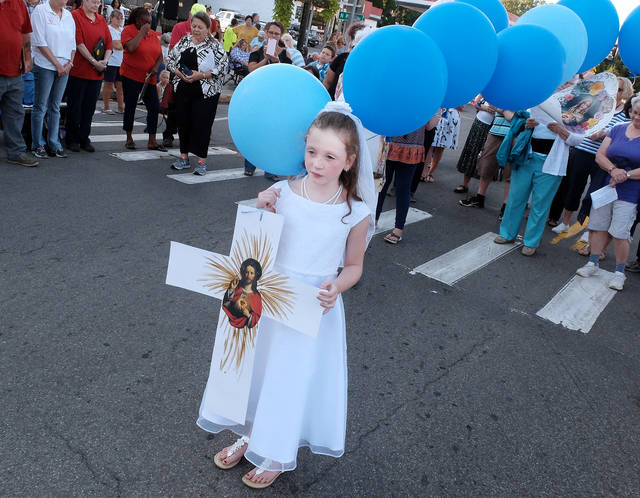 Avery D’Amato waits to release balloons during the Marian procession that was at the beginning of the Clyde Fire Department parade Aug. 12

Dozens of people sang the familiar Marian hymn as they walked through the Village of Clyde on Aug. 12, just moments before the Clyde Firemen’s Parade began. Several of the parishioners — two of them firemen in dress uniform — carried a bier, upon which was placed a large statue depicting the Assumption of Mary into heaven. Several other parishioners carried a large rosary made out of blue and white balloons, which bobbed in the summer breeze.

Accompanied by Bishop Salvatore R. Matano, several priests and a number of Knights of Columbus in full regalia, the parishioners processed out of church at the conclusion of St. Joseph the Worker’s regularly scheduled 5:30 p.m. Mass and walked to the village park. There Bishop Matano offered a brief prayer, and the St. Joseph parishioners holding makeshift rosary beads released their balloons and watched them float into the heavens.

The procession marked the 120th such march through the Village of Clyde in honor of the feast of the Assumption of Mary, which takes place each year on Aug. 15. The tradition was started by Italian immigrants who settled in Clyde more than a century ago, according to Joe Tavano Sr., commissioner of the Clyde Fire Department.

“My great-grandfather and a group of many other families that came over in the mid- to late 1800s brought the tradition over with them, and that’s how it started,” Tavano explained. “What I was told by the old-timers is that the festival had always gone on in some way or another. They always had the Holy Mother and carried her through the streets. They would (honor) those holy days of obligation and use those as days of celebration and family.”

The local chapters of the Sons of Italy and Knights of Columbus had sponsored the procession in its earlier years, but the parade and accompanying carnival has been under the auspices of the Clyde Fire Department since the 1950s, said Tavano, a past chief and 37-year veteran of the department. The fire department also has coordinated the village’s annual fireworks display, which is always held on Aug. 15, regardless of which day of the week the feast day falls upon.

In recent years, however, members of St. Joseph the Worker Parish have stepped up to the plate and taken on the responsibility of coordinating the Marian procession. Several years ago Theresa Molisani and Rose Jeanne Strakal realized that despite the best efforts of people like Tavano, the Marian focus of the August festivities had begun to wane, and they resolved to bring the focus back to Mary and her assumption into heaven.

Molisani’s husband built a bier, the pair purchased and painted a statue of Mary and recruited several men to carry the bier through the streets at the beginning of the firemen’s parade. Molisani and Strakal also invited the children who’d made their first Communion the previous spring to dress up in their finery and hold the balloons in the shape of a rosary. Their hope in doing so, Molisani said, was that other children might see their peers dressed up and marching and be inspired to ask their parents about them, perhaps sparking a conversation about Catholicism or even a return to church for lapsed Catholics.

In 2016 Father David Tedesche became St. Joseph the Worker’s pastor, and he was impressed when he learned of the Marian procession. He had lived in Italy for five years as a seminarian, he told the Catholic Courier, and the procession reminded him of those he’d witnessed while living abroad.

Under Father Tedesche’s leadership, the parish began to take on a larger role in the procession. Like Molisani and Strakal, he also sees the procession not only as a way of expressing devotion to Mary, but also as a tool for evangelization.

“It’s a real opportunity for the parish to have a positive presence at this time. The entire village is outside watching the parade, and here they are looking at a statue of Mary, and the bishop and clergy and parishioners,” Father Tedesche explained. “I think it’s a great way to make the church visible. I think people are very disinterested in religion these days. This is kind of like a counter-statement, showing that hey, there are people interested in religion.”