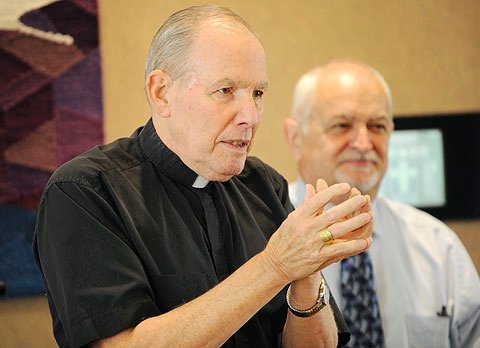 ROCHESTER — In measuring the historical impact of the Catholic Ministries Appeal, one need only consider the 2012-13 appeal’s theme of "Making a Difference Every Day."

There have been some 11,000-plus days of difference-making — and a staggering $127 million raised — since Bishop Matthew H. Clark began the appeal in 1981, leaving the bishop to marvel at the appeal’s positive impact on the Diocese of Rochester. Asked to name a specific example of the CMA’s benefits, he replied "there’s a million of them" during a Sept. 12 press conference at the diocesan Pastoral Center announcing the new campaign.

This year’s CMA goal has been set at $5.8 million. Envelopes will soon be mailed to parishioners, as parishes throughout the diocese kick off the campaign in upcoming weeks. Donations will be accepted through May 31, 2013, according to David Kelly, CMA director.

Diocesan officials are aiming to surpass last year’s final collected total of nearly $5.35 million. Bishop Clark noted that this figure was short of the $5.7 million goal, but was nonetheless a record amount. In addition, it was the fifth straight year the appeal has topped the $5 million mark. With more than 31,000 donors contributing an average of $170 — up from $161 in 2010-11 — the 2011-12 campaign also was the seventh consecutive time the average gift increased.

CMA funds benefit more than 300,000 Catholics throughout the 12-county diocese. This initiative makes up more than half of the $10 million annual diocesan budget and is crucial in maintaining many diocesanwide programs, services and ministries. Among these are faith formation of children and adults; Catholic schools; sacramental preparation; youth, young-adult and campus ministries; Catholic Charities and its 10 regional offices/agencies; information technology; chaplaincies; social-ministry initiatives; support of priests, deacons, pastoral leaders and vocational efforts; parish support ministries; and Pastoral Center operations and services.

Bishop Clark said the "Making a Difference Every Day" theme is twofold: to "thank people for what they have done to enliven the diocese," and to challenge them to continue to giving generously.

He acknowledged that economic times are tough for donors as well as recipients, but expressed hope that donors who are in better financial shape will see fit to compensate for those who aren’t.

Bishop Clark began the appeal in 1981 when it was known as the Thanks Giving Appeal, as a means of doing away with the former method of parish taxation to raise funds. He said the TGA/CMA has served as "a very effective vehicle of education," with donors becoming acquainted with CMA causes "in a way the old way never even began to touch."

The bishop also pointed out that CMA funding makes a better life for numerous folks who live on the fringes of society.

"It means a lot to the people whose voices we seldom hear," he said, adding that donors "would be very touched and moved" to see how the funds are put into action.

For example, Bernard Grizard, diocesan director of Parish and Clergy Services, cited the substantial migrant population in this diocese that is supported by CMA funding. Grizard observed that many families have been split up by deportation issues and often have had nowhere else to turn.

This is likely the final CMA campaign under the leadership of Bishop Clark, who is due to retire sometime within the next several months. The bishop said there has not yet been any discussion as to whether the CMA will continue in its present format under his successor.

EDITOR’S NOTE: Catholic Ministries Appeal gifts may be made by mail, with parish-provided envelopes, or online. Checks, credit cards, electronic-fund transfers and appreciated securities are all accepted. Pledges are tax deductible. The 2012-13 campaign video and brochure may be viewed here. For details, contact David Kelly, diocesan CMA coordinator, at 585-328-3210 or dkelly@dor.org.