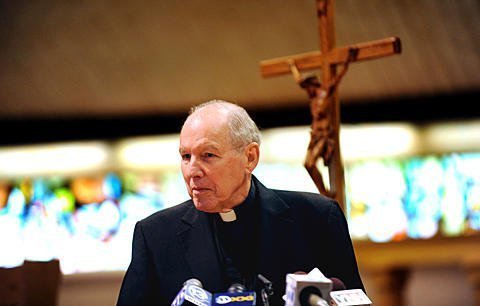 CHILI — Need is up throughout the Diocese of Rochester, and this year’s diocesan Catholic Ministries Appeal has risen slightly to meet that demand, Bishop Matthew H. Clark said Sept. 15 at St. Pius Tenth Church during the annual appeal’s kickoff press conference.

He noted that just yesterday, Natasha Thompson, president and CEO Food Bank of the Southern Tier in Elmira, reported that food requests at her agency have increased substantially.

"That I think plays out correspondingly in the outlets all around the diocese which are there to help people who may need an extra boost at this time," he said.

Although some people may be unable to give as much based on their economic circumstances, Bishop Clark noted that he hopes some donors would be able to respond with increased giving based on the increased needs brought forth.

"I’m confident that our people will respond with their usual generosity," he said.

The CMA funds ministries for more than 314,000 Catholics in the 12-county diocese, such as faith formation; Catholic Charities; Catholic schools,; campus and young-adult ministry; hospital chaplaincy and inmate programs; migrant farmworker outreach; priesthood vocation promotions; ministries of the Vatican and the U.S. bishops’ conference; parish support; evangelization through modern media; promotion of Catholic values on the sanctity of life from conception to death; interreligious and ecumenical dialogue; and preparation of those to be married and those who wish to become Catholic.

This year, CMA donors will be invited to join donor societies ranging from the $500 to the $10,000 level. Donors who have not contributed to the CMA within the past four to seven years will receive personalized postcards featuring the address of a website that offers additional information on how the appeal aids Catholic Charities, vocations and youth ministry within the diocese, said Dave Kelly, diocesan coordinator of the CMA.

"We are trying to use different marketing strategies to raise people’s awareness and attract those who have not given to us in awhile," said Kelly, who also is an associate director of the diocesan office of Stewardship and Communications.

This year’s campaign video, which was shown at the press conference, features Kevin and Ann Connolly of Elmira, who were able to buy a home with the financial and educational assistance of Catholic Charities of Chemung/Schuyler’s First-Time Homebuyer Program. In Elmira, more than 400 families have purchased homes through this program. Similar programs are offered through Catholic Charities agencies throughout the diocese.

The video also features the story of Becca Hilsdorf, a teen who has been active in St. Pius Tenth Church’s youth-ministry program and such diocesan programs as Foundations Youth Leadership, which has been supported in part by the CMA.

Karen Ludwig, youth minister at St. Pius Tenth, noted that Hilsdorf is a prime example of a teen who has become a role model for her peers. Ludwig pointed out that CMA proceeds also support faith-formation programs and training for youth ministers.

"These programs encourage the involvement and spirituality of our youth as well as developing their leadership qualities," she said. "In turn this helps build up our families, our individual faith communities and our diocese as a whole."