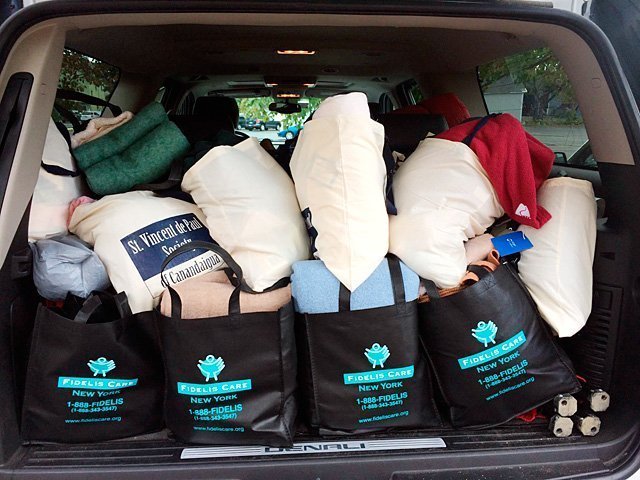 Bags containing blankets, food, clothing and personal-care items have been distributed to the homeless by Nowhere To Go, a coalition of groups, agencies and individuals trying to address homelessness in Ontario County.

More than two dozen people combed through wooded areas around Canandaigua, Geneva, Victor and Farmington in the early morning hours of Oct. 2. Traveling in groups of four to six people, these volunteers were searching for evidence that people were living in those woods, and they talked with five such homeless individuals between 3 and 8 a.m., according to Bonnie Ross, executive director of The Partnership for Ontario County Inc.

These volunteers were taking part in a point-in-time count of homeless individuals in Ontario County, the second such event planned by the Nowhere To Go coalition of groups, agencies and individuals dedicated to sharing information about and researching solutions to the problem of homelessness in Ontario County. The Partnership for Ontario County is the lead agency of the coalition, which also includes Catholic Charities of the Finger Lakes as well as seven other organizations and a number of faith-based communities and individual volunteers within the county, Ross said.

The impetus for the coalition came about two years ago, when caseworkers in Catholic Charities of the Finger Lakes’ Canandaigua office noticed they were getting a lot of requests from individuals who were looking for a place to take a shower, recalled William Lamb, CCFL’s director of services. The agency’s staff members met to discuss the issue and found a solution relatively quickly when the local YMCA agreed to open up their shower facilities to individuals with vouchers provided by Catholic Charities. That solved the short-term crisis, but the staff members of Catholic Charities and other local human-service agencies knew that access to showers was only the tip of the iceberg.

"People are asking for a shower, but let’s be clear. The problem is they don’t have a place to be. They’re homeless," Lamb said.

Caseworkers and staff members from Catholic Charities of the Finger Lakes soon began discussing the issue with people from other agencies in the area, and soon the Nowhere To Go Coalition was formed. The group started a Facebook page, where the announcement of its first meeting generated quite a bit of discussion, Lamb recalled.

"We thought maybe 35 people would come, but about 125 people actually showed up. That kind of told me we are onto something," he said.

The people who came to the meeting represented a broad cross-section of the community, he added. Some people stood up and said they had been homeless before, and they’d had to "live by their wits" because there hadn’t been anywhere for them to go in the local community. Several business owners stood up and said they would need a few dozen more employees in the next few months and would be willing to hire formerly homeless individuals if the coalition’s members could find a way to stabilize them, Lamb said.

"Volunteers were able to speak with a number of unsheltered homeless both in July and October," Wagner said. "In addition, they found a lot of evidence of camps that were not occupied at the time of the survey, and much more anecdotal evidence from members of the community who are aware of the homeless community."

Volunteers also distributed bags of supplies, such as socks, hats and soap, to the homeless people they encountered. In July the county’s food cupboards also surveyed their clients in order to find out more about people who may not be living in the woods but still may not have stable places to live, Ross said, noting that some homeless families may be "couch surfing" or temporarily staying with friends and family members.

"The homeless are not what we imagine they are. It can be anyone at any time. It can be somebody who lost their job, someone who’s suffered some kind of illness, someone who’s just been hit with all the challenges of life," Ross said.

Nowhere To Go has an immediate crisis team to provide assistance to any homeless individuals who request help, and currently is working to determine the next steps it needs to take in order to address the problem, she added.

EDITOR’S NOTE: The public is invited to participate in the coalition’s meetings, which are held the second Thursday of every month at 5 p.m. For more information, visit the coalition’s Facebook page at www.Facebook.com/NowheretoGOCA.