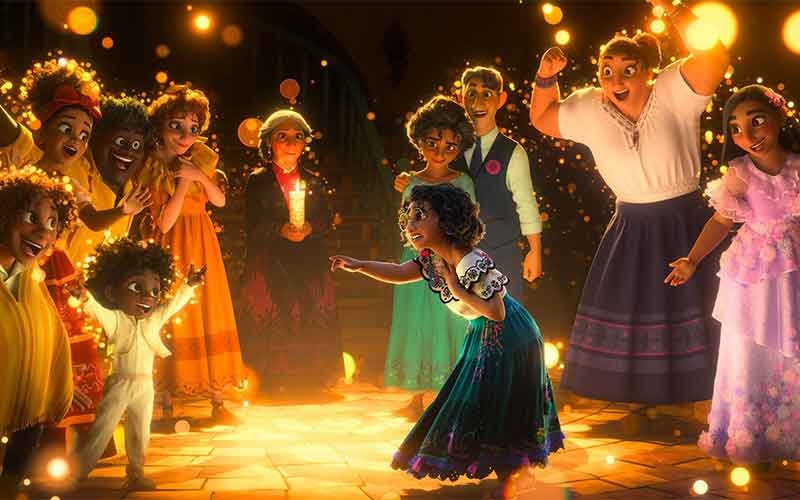 This is a scene from the movie "Encanto." The Catholic News Service classification is A-II -- adults and adolescents. The Motion Picture Association rating is PG -- parental guidance suggested. Some material may not be suitable for children. (CNS photo by Disney)

NEW YORK (CNS) — The feature film “CODA,” which won three Oscars, just captured another accolade: a Christopher Award from the Christophers, which annually honors the best in uplifting and edifying movies, television programs and books.

Also among the winners was “The Waltons: Homecoming,” both a reboot and a prequel to the long-running 1970s family drama.

Another remake, “All Creatures Great and Small,” which aired on PBS’ “Masterpiece” drama anthology, captured the Christopher Spirit Award.

“Encanto,” the popular Disney animated film about each person having inherent worth regardless of their skills, was a winner, as was “Francesco,” a profile of Pope Francis and his efforts to bring the message of human dignity to the world by shining a light in places where political, social, economic and religious injustices are occurring.

“After the hardships we’ve endured in the last two years, we need stories of hope, light, and unity to lift our spirits and guide us toward a brighter path,” said a statement from Tony Rossi, the Christophers’ director of communications.

The Christopher Awards, now in their 73rd year, celebrate writers, producers, directors, authors and illustrators whose work “affirms the highest values of the human spirit” and reflects the Christopher motto, “It’s better to light one candle than to curse the darkness.”

Scottish veterinarian James Alfred Wight, who moved to England for his first full-time vet job, chronicled his patients and their owners, adopting the pen name James Herriot, for “All Creatures Great and Small,” from which two TV series have been adapted.

“At a time when our modern world is roiled by war, disease and division, the stories in ‘All Creatures Great and Small’ remind us of life’s most important lessons: the bonds of community, the power of humor, the hope and resilience required to overcome struggles, the sacrifices we are called to make for a greater good, and the love that allows us to see the best in the people around us,” said the Christopher Awards judges in giving the new series the Spirit Award.

In “CODA,” which won Oscars for Best Picture, Best Adapted Screenplay and Best Supporting Actor for Troy Kotsur, the only hearing member of a deaf family must choose between helping her parents and brother run their fishing business or pursuing her dream of becoming a singer.

A similar plot runs through “The Waltons: Homecoming,” which aired on The CW. In Depression-era Virginia, 17-year-old John Boy feels torn between supporting his large family or pursuing his dream of being a writer.

Besides “The Waltons,” other TV, cable and streaming honorees were:

— “Aly Raisman: Darkness to Light,” which follows the Olympic gold medalist as she meets fellow sexual abuse survivors and learns about their trauma, pursuit of justice and ongoing journey toward healing.

— “Amen-Amen-Amen,” which tells the story behind the first Jewish community formed in a Muslim country (Dubai) in centuries, and the historic gift of a Torah scroll dedicated to the memory of an Arab-Muslim ruler.

— “The House That Rob Built,” which explores the legacy of Rob Selvig, the University of Montana’s women’s basketball coach, who turned his team into a model of inclusion and empowerment at a time when gender discrimination was the norm.

— “Lidia Celebrates America: Overcoming the Odds,” in which chef Lidia Bastianich meets resilient Americans who have faced extraordinary challenges, found purpose in serving their communities and turned their losses into accomplishments.

Likewise, six books for young readers were honored: “The Boy Who Loved Everyone” by Jane Porter and illustrated by Maisie Paradise Shearring, preschool and up; “10 Hidden Heroes” by Mark K. Shriver and illustrated by Laura Watson, kindergarten and up; “Dancing with Daddy” by Anitra Rowe Schulte and illustrated by Ziyue Chen, ages 6-up; “Pigskins to Paintbrushes” by Don Tate, ages 8-up; “The Elephant in the Room” by Holly Goldberg Sloan, ages 10 and up; and “The Happiest Man on Earth” by Eddie Jaku, young adult. Jaku died recently at age 101.