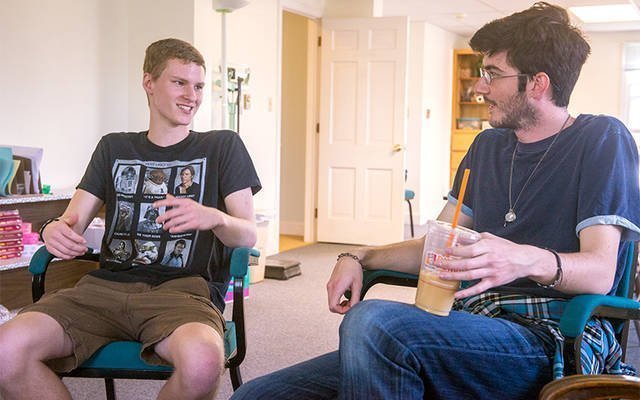 Liam Bailey, who will be a college freshman this fall, and FOCUS missionary Jim Davey talk about about faith on campus during a discussion at St. John the Evangelist Church in Spencerport May 5. (Courier photo by John Haeger) 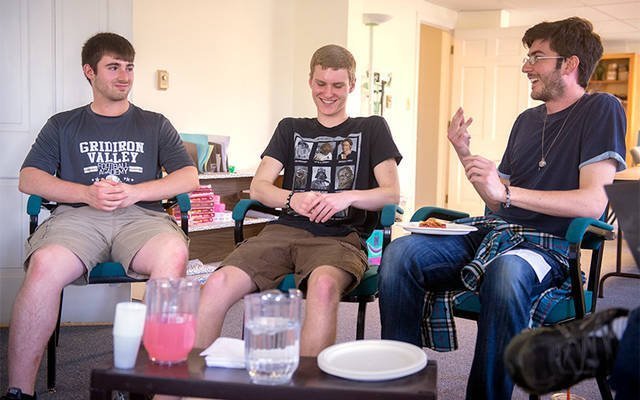 Raymond Richard, Liam Bailey and FOCUS Missionary Jim Davey talk about maintaining one’s faith at college during a discussion at St. John the Evangelist Church in Spencerport May 5. (Courier photo by John Haeger)

SPENCERPORT — In just a few weeks, Liam Bailey will begin classes at Monroe Community College and Jackson Glozer will do the same at Rochester Institute of Technology, where Liam plans to eventually attend as well. Journeying farther from home will be Raymond Richards, a freshman-to-be at the University of Buffalo; and Lindsay Gallagher, who is set to start at Villanova University in Philadelphia.

The quartet said they’re excited to embrace the many opportunities that await as they begin building toward their respective careers. Lindsay noted that college also will involve new social environments: After being surrounded by the same friends in Spencerport since kindergarten, she said, “Now I’m going to be with an entire group of people where nobody knows who I am.”

So how will their Catholic faith fit into this major transitional period?

That was the chief question explored during a discussion Lindsay, Liam, Jackson and Raymond attended May 5 at St. John the Evangelist Church, where they are all parishioners. Leading the talk was Jim Davey, a missionary with the Fellowship of Catholic University Students (FOCUS). He had been stationed this past school year at the University of Rochester, evangelizing both Catholic and non-Catholic students.

Participants said they plan to maintain the Catholic foundation they’ve built thus far in life. In order to achieve this, Davey suggested seeking like-minded people on campus. He cited a personal example, saying he only attended Mass occasionally in high school but began going more frequently while a student at the University of Maine, where he was profoundly influenced by fellow students who were involved with the school’s Catholic Newman Community.

“They seemed to have found something that brought them so much joy. And that’s what really attracted me to go deeper into my faith,” said Davey, who graduated from Maine in 2016.

Father Peter Mottola, pastor of St. John the Evangelist, shared a similar story during the May 5 gathering. While attending Rochester Institute of Technology — he is a 2007 graduate — Father Mottola was influenced by a group of Catholics who were so passionate about their faith that he ended up converting to Catholicism. From there, Father Mottola was ordained to the diocesan priesthood in 2013.

On the other hand, Davey acknowledged that religion is not prioritized by all college students, even those who arrived on campus as practicing Catholics. He said this might not even be a conscious decision, but rather something that gets lost among the many distractions of college life. For that reason, Davey implored the Spencerport teens to seek out their colleges’ Catholic campus ministries as soon as they arrive at school — or, if such a ministry is not offered, to locate the nearest Catholic church in town. Davey also suggested checking out online Catholic resources as another means of enhancing their spiritual life. In addition, Davey and Father Mottola recommended setting aside daily prayer time.

“What am I doing, why am I doing it, where do I want to be in life? Prayer really helps us with that,” Father Mottola said, adding that prayer is especially valuable when grappling with difficulties and temptations.

Davey agreed that a strong spiritual life can help students remain strong in the face of such influences as sex and overindulgence in alcohol. He said that by following their Catholic faith, they can embrace something that’s deeper, longer- lasting and ultimately more satisfying than these temporary pleasures. Meanwhile, both Liam and Raymond said they plan to draw upon their faith to guide them toward making sound moral choices.

Father Mottola further noted that the soon-to-be college students might find their beliefs challenged by others, and in fact they might even question their own faith. Yet the Spencerport pastor said it’s perfectly fine to reflect deeply on what they believe and why.

“Because the (Catholic) faith is true, it can handle our questions,” he said.