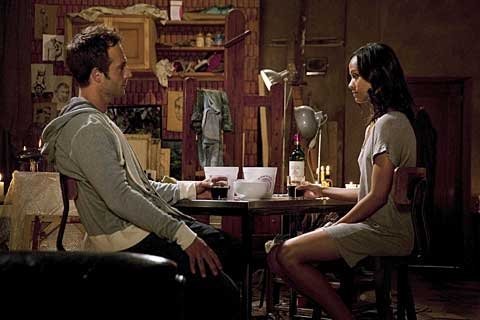 NEW YORK (CNS) — Two things to note about Cataleya, the central character in the over-the-top action flick "Colombiana" (TriStar/Stage 6): As a trained assassin, she’s very good at killing people; as played by Zoe Saldana, she’s even better at looking good while she does it.

Lest you miss the latter point, Cataleya conveniently dons a skintight black leotard to carry out one of her elaborate trademark hits.

What’s a nice girl like her doing in the death-for-dollars racket? Well, way back in 1992, as early scenes show us, young Bogota-born Cataleya (Amandla Stenberg) witnessed the fatal outcome of a tiff between her parents and her father’s employer, a Colombian drug lord named Don Luis (Beto Benites).

Making her way to the States, the orphaned Cataleya found shelter with her gangster uncle Emilio (Cliff Curtis), a thug with a heart of gold — if only for his kith and kin.

Already out for revenge against Don Luis and his chief minion Marco (Jordi Molla), the traumatized tot demanded that Tio Emilio immediately teach her how to introduce folks to the Big Sleep. With avuncular wisdom, however, he insisted that she graduate from grammar school first.

Flash forward to the current millennium and we find Cataleya executing contracts for Emilio while still pursuing her dreams of vengeance. But an FBI agent named Ross (Lennie James), though remarkably slow on the uptake, is at least lukewarm on her trail, while her heretofore anonymous romance with increasingly nosy artist Danny (Michael Vartan) also threatens to thwart her plans.

Pure pulp, director Olivier Megaton’s shoot’em-up expends ammo at a "Scarface" pace, yet generally demurs from showing the gory consequences of its gun battles, or of its heroine’s more creative rub-outs, such as that involving a shark tank.

Catholic viewers may be wryly amused by the fact that Emilio is portrayed as attending Sunday Mass on a regular basis, accompanied by his elderly mother (Ofelia Medina), who still wears a mantilla to church. Like many a mafia don on screen and — who knows? — perhaps off it as well, he seems not to have noticed that Gospel values and a life of violent crime are just a tad incongruous.

Maybe he missed that Sunday.

The film contains constant, largely bloodless, action violence, a vengeance theme, brief nongraphic premarital sexual activity, a few uses of profanity, at least one instance of rough language and frequent crude or crass terms. The Catholic News Service classification is L — limited adult audience, films whose problematic content many adults would find troubling. The Motion Picture Association of America rating is PG-13 — parents strongly cautioned. Some material may be inappropriate for children under 13.