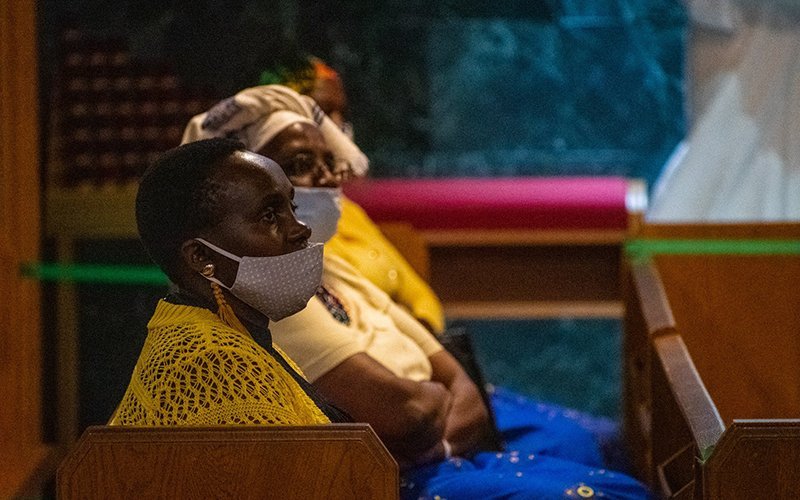 Faithful listen to Bishop James F. Checchio of Metuchen, N.J., address racism during his homily at the Cathedral of St. Francis of Assisi June 19, 2020. (CNS photo by Gerald Wutkowski Jr./courtesy Diocese of Metuchen)

When I received the invitation to write this piece it included the request to discuss my experience of racism within the church. I immediately began to reflect on the fact that I have received that invitation more over the past 18 months than I have in 16 years as a Catholic.

To be perfectly honest, and model what I ask of my clients as a counselor, that immediately kicked up feelings of frustration and resentment.

Why did it take 15 years for the question to come up? Will it remain a pertinent question or will this simply be a passing “fad” that I am being instrumentalized to participate in? Racism in the church certainly isn’t new.

Although I understood my initial frustration, I immediately began to sort of deal with myself and my feelings so they would not deter me from obedience and attentiveness to what God is doing in his church today and my own call to contribute to the work of building the kingdom.

I begin with that because I have also seen more racism in the church over the past 18 months than in 16 years as a Catholic.

The pandemic served as an emotional primer for what would soon become a ripping off of Band-Aids and tearing down of veils related to racism, racial division and mindsets rooted in white American norms as the dominant norms to be generalized across all other cultures (which is another way to say white supremacy).

The pandemic was an emotional primer because it was truly, if we’re being honest, an existential crisis in a way. Many of us questioned the things we had assigned significant value and meaning to, as our calendars cleared, events were canceled and we were hunkered down in our homes, in some cases with families we had not previously spent much time with.

Freedom became a topic of frequent social media pontification, which as a counselor did not surprise me, as existential crises are often brought on by forced shifts in our understanding of human freedom.

As the stage was set, our humanity exposed, the best of who we are emerging as well as the worst of what we struggle with, it was only right and fitting that this also brought about exposure to where we really stand before God as a church when it comes to a need for racial reconciliation.

I have witnessed, over the past 18 months, people from all walks of life deny racism as an issue in our church and double down on this stance in the face of the real-life, present-day experiences of others.

I have witnessed overtly racist comments written and spoken by individuals who are considered leaders in our American church, both clergy and laity. I have witnessed the subtle downplaying of the issue by some in the church, as a sort of resounding “it’s an issue, but it’s not a big issue any longer, we need to focus on abortion, that is the bigger issue.”

This dichotomization of pro-life ministry is in my opinion a work of evil. If pro-life ministry remains fragmented by internal debates about the “most important pro-life issues” we will never be united enough to deal a true blow through the power of God to the culture of death.

Also, over the past 18 months, I have observed the holding onto, with clenched fists, of institutional patterns that become challenged when we face patterns of white supremacy; a sign that perhaps some of us have become attached to the privileges we have garnered through mindsets predicated on racism, and would rather secure those privileges than face the unknowns that would come with seeing our ministries shored up to reflect more clearly the heart of Jesus and the mind of God.

This resistance to matters of social justice, including reconciling racial divides in our church, makes evident the spiritual significance of the racial division among us. For, it is Satan who hates most the coming of the kingdom and the final realization of the unity of the human race.

This past weekend at Mass I heard truths about our call as a church to combat racism, discrimination and prejudices in our church and in our society preached from the pulpit. I felt myself exhale and realized how much I needed to hear that from the mouth of someone ordained to preach in our church.

I was also asked, when invited to write this for you, what we can do on a larger scale to combat racism.

— Two: Catholic schools have the challenge before them of looking at curriculums to see where mindsets that degrade other cultures and races persist in curriculums and also implement more curriculums that celebrate the lives of great Catholics of all cultures in our church, including the first six Black American Catholics who have open causes for sainthood.

Catholic schools also have the challenge to think critically about ways to make Catholic education more readily available to people of color.

— Also, Catholic ministries are faced with the challenge of looking around the tables of their ministries and asking, Was it God’s will that this table be all or mostly one race? Or have we overlooked people who God has called here because our processes for inviting people to serve and be a part of the ministry are embedded in systems that now naturally exclude others?

Before sitting down to write this, I was wrapping up a newsletter for the school where I serve as a counselor. One of the topics was bullying prevention.

Toward the end of the section on bullying I encouraged parents to help their kids understand that there is no middle ground. No action is an action. So when they witness bullying they will either serve the solution or serve the bullying.

The same applies for us with racial division. We like to use the word combat, yet we must remember, this battle is not ours, it’s the Lord’s (as one of my favorite Gospel songs says), and there is not a middle ground.

Sister Josephine Garrett is a Sister of the Holy Family of Nazareth and a licensed counselor.