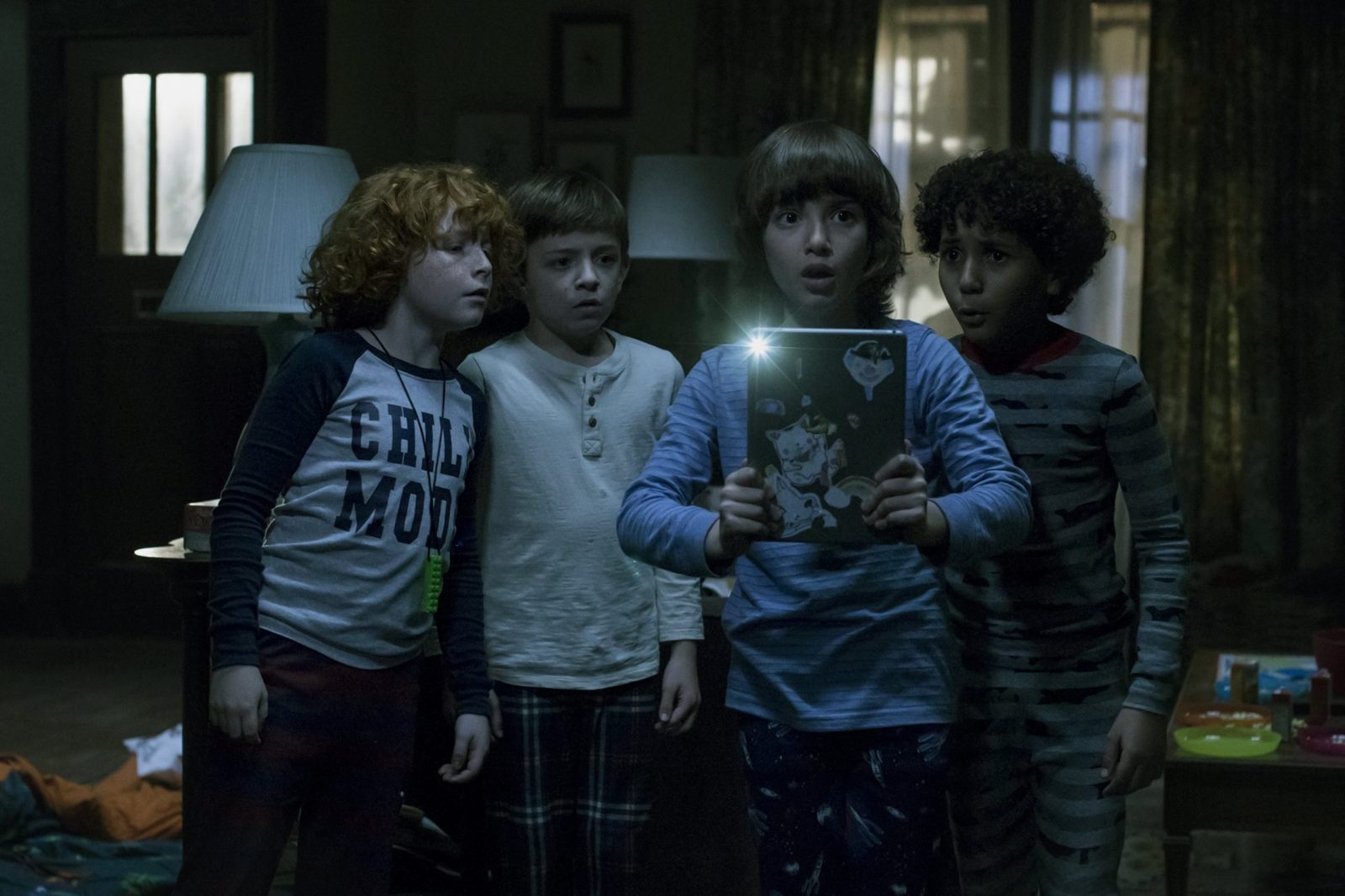 Gavin MacIver-Wright, Winslow Fegley, Azhy Robertson and Jayden Marine star in a scene from the movie "Come Play." The Catholic News Service classification is A-II -- adults and adolescents. The Motion Picture Association rating is PG-13 -- parents strongly cautioned. Some material may be inappropriate for children under 13. (CNS photo by Jasper Savage/ Amblin Partners via Focus Features)

NEW YORK (CNS) — If the monster movie “Come Play” (Focus) is only reasonably effective in frightening its audience, it is at least refreshingly free of objectionable material, including gore.

Thus, although it’s not a film for small fry, it is a feature that can be enjoyed by the rest of the family.

Oliver Sutton (Azhy Robertson) is an isolated 8-year-old autistic boy who doesn’t speak, instead using a handheld device to communicate his thoughts. His attentive mom Sarah (Gillian Jacobs) works hard to battle the effects of his condition. But she resents the fact that Oliver’s dad, Marty (John Gallagher Jr.), only wants to spoil his son and avoids the daily drudgery involved in really caring for him.

As a result, the couple’s marriage is breaking down and Marty is preparing to move out of the house. So, when Oliver begins to be stalked by an otherworldly creature who goes by the ironically prosaic name Larry, Sarah is at first too distracted to grasp what’s going on.

Larry uses the internet to present Oliver with a combination children’s story and autobiography called “Misunderstood Monsters.” If he can get Oliver to read his tale all the way through, Larry will be able to cross over fully into the human realm and carry Oliver off with him. He pretends to want to befriend the lad but, of course, his real design is a far darker one.

Luckily for Oliver, Sarah eventually becomes a believer. Once she does, she gives her all to the fight to protect him.

In expanding his eponymous short film, writer-director Jacob Chase goes for old-fashioned, bump-in-the-night thrills. As for the more serious items on his agenda, they’re conveyed with uneven success.

The psychology underlying Larry’s attempt to exploit Oliver’s vulnerability rings true. But Chase’s message about online interaction supplanting in-person encounters and thereby breeding the loneliness that creates Larry in the first place is a bit heavy-handed. His depiction of maternal love enduring through challenges alike ordinary and extraordinary is, by contrast, served up more adroitly.

Its sweetly sentimental wrap-up may not be to every taste. But “Come Play” is that rarity in the horror genre, a picture parents and their older kids can watch together without wincing.

The film contains occult themes and at least one mild oath. The Catholic News Service classification is A-II — adults and adolescents. The Motion Picture Association rating is PG-13 — parents strongly cautioned. Some material may be inappropriate for children under 13.