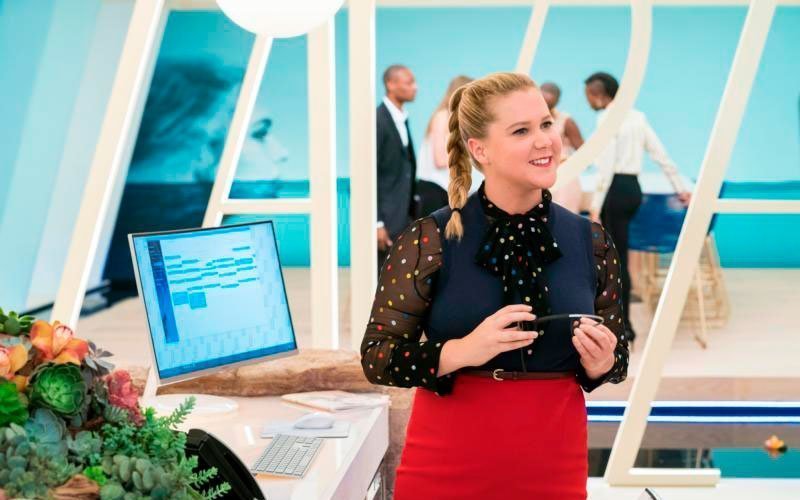 Amy Schumer stars in a scene from the movie "I Feel Pretty." (CNS photo by STXfilms)

In “I Feel Pretty” (STX), the latest Amy Schumer comedy, a tumble during a Soul Cycle workout gives her out-of-shape character the reverse of body dysmorphic disorder. Thus she sees herself as slim, beautiful and perfect — and this supercharges her self-esteem, transforming her romantic life and her career.

Logical flaws in this aside, parables about self-confidence can be useful to all. While some may see the movie’s theme as veering in the direction of fat-shaming, moreover, Schumer is more deeply engrossed in performing physical comedy routines.

“I Feel Pretty” also represents a considerable departure from the raunchiness on which Schumer — who plays Renee, a lovelorn online customer-service representative at Lily LeClaire, a big cosmetics firm — has built her brand. Even so, a sequence in which Renee’s sudden boldness is shown to extend to sexual matters may have the parents of teen girls, who are this film’s target audience, hesitating to give them the green light.

Pathos is not the aim here. Instead co-writers and directors Abby Kohn and Marc Silverstein have packaged an unbendingly cheerful girl-power fable.

Renee, with low self-esteem and a healthy appetite for carbohydrates, considers herself stuck permanently in a lost corner of life. Somewhat desperately, she and girlfriends Vivian (Aidy Bryant) and Jane (Busy Philipps) attempt to fire up their love lives with online dating — with predictably little success.

All it takes is that exercise accident, though, and Renee has the moxie to seek a new job as a receptionist at Lily LeClaire. Having gained the post, her aptitude for identifying the shopping habits of the average gal at the makeup counter impresses the namesake founder (Lauren Hutton) and her daughter, Avery (Michelle Williams).

Renee’s newfound self-assurance alienates her from her pals for a time, but also lands her a sensitive new boyfriend, Ethan (Rory Scovel). He, like everyone else, sees past the illusion, but admires her for going with it.

That second thump to the head will eventually arrive, though, raising the question of whether Renee can succeed without the ongoing fantasy that animated her.

Despite its trite plot, “I Feel Pretty” conveys sound messages and showcases some good moral choices. It also reinforces an insight as old as the Book of Proverbs: Namely, that “charm is deceptive and beauty fleeting” — and that real worth, accordingly, is to be sought within.

The film contains an implied nonmarital sexual encounter, obscured rear nudity and a single instance each of scatological and anatomical humor. The Catholic News Service classification is A-III — adults. The Motion Picture Association of America rating is PG-13 — parents strongly cautioned. Some material may be inappropriate for children under 13.

– – –
Jensen is a guest reviewer for Catholic News Service.