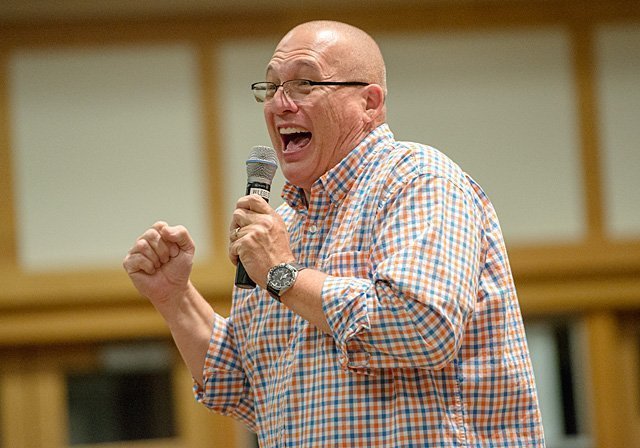 Bob Perron, who calls himself a "Stooge 4 Christ" entertains youth groups with his storytelling during a presentation at St. Pius Tenth Church in Chili Oct. 25.

CHILI — Does humor have a rightful place in our faith and prayer life? Some might say no, citing concern over being properly respectful and reverent toward God.

Bob Perron, on the other hand, is all for lightening up within a Catholic-church setting. In fact, he contends that acting in such a way can bring us closer to our faith.

“Our God is the creator of all joy, and laughter is a part of that,” Perron told the Catholic Courier, adding that mixing fun and faith is particularly effective in uniting youths: "Laughter and fun is part of what brings us together. When young people laugh, you see barriers break down.”

Perron, a nationally known Catholic comedian, was intent on proving his point Oct. 25 at St. Pius Tenth Church. He started out by leading a game of "Simon Says" with young audience members, then commanded participants to move around the church so they were sitting next to strangers. From there he had them share wacky information with each other, such as naming their most embarrassing moment and their favorite body scar — even revealing whether they flush public toilets with their hands or feet.

He also kept the crowd smiling with his quips, such as his observation of Jesus wandering off from his parents as a 12-year-old and then not being mentioned again in the Gospels until he was in his 30s.

"Think about it. He was grounded a really long time!" Perron remarked.

Perron also recalled the time his own 3-year-old daughter balked at seeing chalices put in the tabernacle during Mass, because she considered Jesus her friend and not deserving of being boxed up. After Communion she shouted in front of a silent church, "Don’t worry, Jesus, I’ll get you out of there!"

Yet once Perron had established a humorous rapport with the attendees at St. Pius Tenth, he switched gears toward more sobering stories.

He told of a drug-abusing teen who turned to the Bible as a source of refuge while in treatment, and eventually served as lector at his confirmation. Then there was the boy with a history of being bullied who went on a one-week youth retreat and refused to speak with or even look at anybody the first couple of days. Spurred on by the encouragement of several participants, he gradually opened up and went on to become popular at his high school.

Perron emphasized to attendees that despite their own struggles and uncertainties, God is with them the whole way: "I believe God’s got great things in store for each one of you," he said.

Katherine Tantalo, 15, was among the approximately 125 audience members that included youths from Rochester-area parishes as well as a busload from Elmira. She said she appreciated how Perron used humor to pave the way for vital messages about concerns relevant to her age group.

“He drew us in — kind of like a fishing rod, reeling us in,” said Katherine, a parishioner of St. Mark in Greece who attends youth group at St. Charles Borromeo, also in Greece. “I feel that when you make something fun, it makes it 100  times better.”

Perron, 51, is a self-proclaimed "Stooge 4 Christ," based on his close physical resemblance to Curly of the Three Stooges and his obvious penchant for providing laughter. Currently the director of youth and young-adult ministry in the Diocese of Wheeling-Charleston, W.Va., Perron also was the keynote speaker for the Diocesan Youth Convention in Rochester in 2006.

When asked if God possesses a sense of humor, both he and Katherine replied quickly in the affirmative.

”If God didn’t have a sense of humor, he wouldn’t have chosen the apostles he did,” Perron said, referring to their many inaccurate interpretations of Jesus’ teachings.

Perron emphasized that Mass itself should be treated with reverence and not as a laugh-out-loud experience, yet Katherine said liturgy can still be approached with the kind of joy that humor helps spark.

"Once, I went to a retreat and they said that Mass is like a party with God," she recalled. "You spend time with God and celebrate with him.”