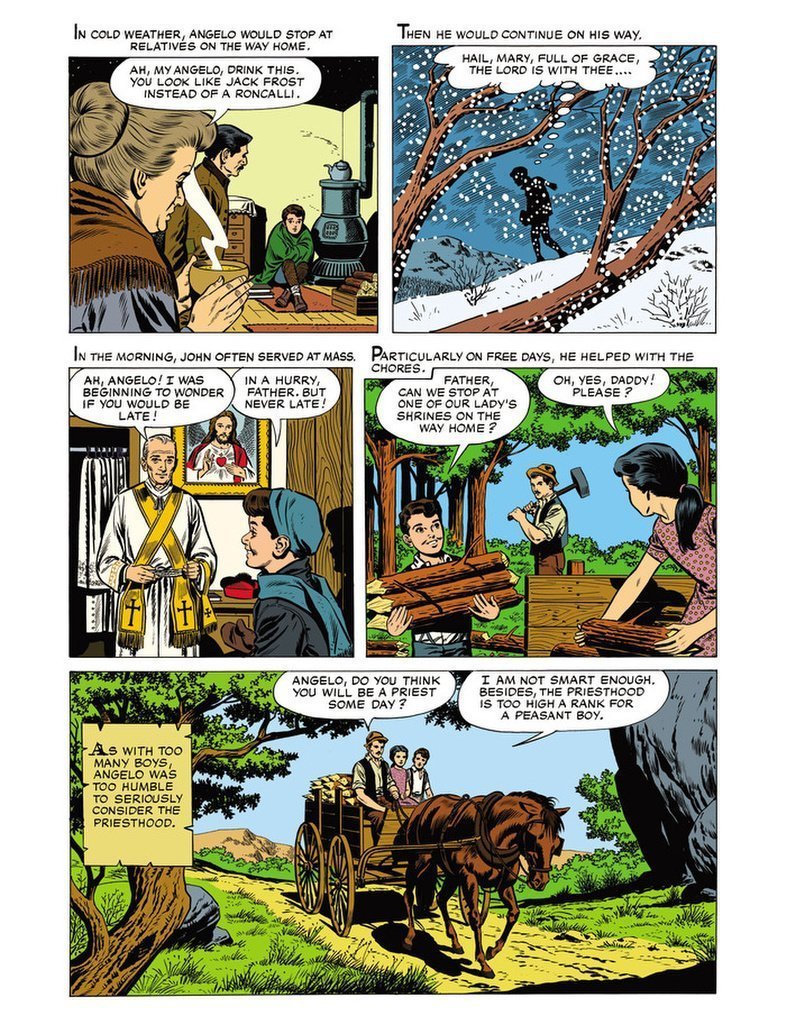 This is a page from the comic book “The Story of Pope John XXIII.” The book is a reissue of a profile written and drawn by Joe Sinnott, an artist known for inking some of the most memorable Marvel titles from the Golden Age of comics.

"The Story of Pope John XXIII" (MSJT Publishing) is a reissue of a profile written and drawn by Joe Sinnott, an artist known for inking some of the most memorable Marvel titles from the golden age of comics.

In the early 1960s, Sinnott, a Catholic, was busy with a Marvel series called "The Fantastic Four" when he got a call from George A. Pflaum, the head of Treasure Chest of Fun & Fact, a publisher of faith-themed comics. Pflaum had seen Sinnott’s work and wanted him to create a biography of the pope.

Sinnott called his boss — a man named Stan Lee — and told him he was taking a leave of absence to devote his attention to the Treasure Chest project.

More than 50 years later, the resulting narrative has been lavishly republished as a handsome oversized red hardback. This was made possible by a Kickstarter campaign that succeeded in raising more than $10,000.

The volume, a limited run with signed copies available upon request, has been produced with great craftsmanship and care.

The color restoration, which was done by artist Leonardo Ito, actually improves on the original comic. The paper is now a high-grade glossy stock that gives the colors a richness that the first version, printed on less expensive paper, could not match.

The book is a straightforward account of the pontiff’s life. The fourth of 13 siblings, Roncalli was born into a family of Italian sharecroppers Nov. 25, 1881. Ordained a priest in 1904, he rose through the ranks of the papal diplomatic corps, serving as apostolic visitor to Bulgaria, apostolic delegate to Turkey and Greece as well as nuncio to France before becoming a cardinal, and the patriarch of Venice, in 1953. He was elected pope five years later.

As John XXIII, Roncalli foreshadowed the current pontificate by bringing a more freewheeling style to his office. As Sinnott’s work shows, this was a pope who wandered the Vatican gardens alone, sometimes startling workers there. He renewed an ancient Lenten rite by washing the feet of a group of young priests on Holy Thursday.

John also was known to be not just funny, but witty: When asked how many people worked in the Vatican, he famously replied, "About half."

Suitable for readers of all ages, Sinnott’s biography was originally published in 1962, the year its subject convened the Second Vatican Council. Pope John died the following June, and was canonized April 27, 2014.