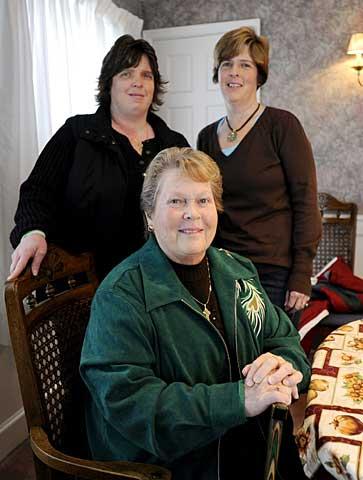 BATH — It’s not that Stephanie Manciocchi, Suzanne Luckenbach or Gretchen Hubbard ever lost their Catholic faith. Rather, they went through a self-described gradual separation from church involvement.

Manciocchi and Luckenbach came to fear judgment by their parish community because neither of their marriages lasted. The two sisters, along with Hubbard, their mother — all residents of Avoca — also were angered by the priestly sexual-abuse scandals of the early 2000s. In addition, Hubbard admitted that basic "human laziness" caused her to stop attending church.

Then a tragedy occurred that threatened to alienate them further: Manciocchi’s 11-year-old son, Logan, died of brain cancer on Sept. 10, 2008, after a two-year illness.

"It’s really easy to lose your faith when your child dies," Manciocchi remarked while a photo album of Logan lay in front of her.

Despite her inactivity in church, Manciocchi felt strongly about having a Catholic memorial service for her son. Yet she worried about the response she’d get upon contacting St. Mary Church in Bath: Would she be chastised for having been away from the church? Would the fact she hadn’t raised Logan in the faith be held against her?

Those concerns were quickly erased by Deacon Ray Defendorf, who was then the Steuben County parish’s pastoral administrator (he has since retired). He arranged a memorial service at St. Mary that took place Sept. 15, 2008, and was attended by more than 300 people. Four days later, Deacon Defendorf provided music during a candlelight vigil at Hees Memorial Park in Avoca, where Logan had played his beloved sport of baseball.

"He (Deacon Defendorf) put together the most magnificent service you couldhope for. We reached out, and he reached back twice as much," said Manciocchi, adding that non-Catholics were impressed with Deacon Defendorf’s care and concern as well.

"He was completely, like, there when you needed him," Luckenbach said.

"He couldn’t have been more perfect in his approach. Deacon Ray actually pulled us physically back into church," Hubbard said.

Since then, Hubbard has fully returned to the church and her daughters are attending semi-regularly. Deacon Defendorf summarized this conversion experience as "the wondrous way that God works through the trials and tragedies of life to mend relationships and build new ones."

Many Catholics fall into similar states of flux with their faith, and — as the above example illustrates — whether they return to the church may well depend on what kind of reception they get while putting one foot back in the water. Alene Goodman, faith-formation coordinator at All Saints Parish in Corning, believes a large number of Catholics wish to come back but need a strong dose of encouragement.

"People are just waiting for an invitation to come home," she said.

Goodman oversees a parish initiative, "Welcome Home to the Catholic Church," for nonpracticing Catholics. The six-week discussion program began just after Christmas amid a heavy publicity campaign and a plea for parishioners to spread the word to any inactive Catholics they might know. Another series is due to start shortly after Easter; Goodman noted that these time frames were sought in order to connect with the many people whose church attendance is limited primarily to holidays.

hadn’t been a practicing Catholic for nearly 40 years.

"In my early 20s I became self-consumed and receptive to little except what was about me, and what I wanted," Boland remarked. He nevertheless maintained a close relationship with the Virgin Mary through the years and said he even has begun doing paintings of her.

Last year, after suffering a financial setback and moving back to Corning from Arizona, Boland found himself taking serious stock of his faith. He attended a Mass at St. Mary Church in early December and that turned out to be a pivotal point.

"The sermon that day called out to those who were removed from the church and invited us home. I called the parish office the next day," Boland said, adding that "the invitation at Mass was the human expression of the invitation I was feeling from God."

Goodman said a similarly successful program was conducted in 2000 at the All Saints churches. That one had a profound effect on Mike Parry, who not only returned to the church at that time but now serves on the current Welcome Home core team.

As was the case with Boland, Parry had been away from the church for decades, citing a combination of disagreeing with church teachings and "being a kid with things that seemed more important." Yet as he grew older, he felt a need to reconnect — and he finally took part in the 2000 version of Welcome Home thanks to a sign placed in front of the former St. Patrick Church to promote the program.

"I’d drive by there a lot and I’d see that sign," Parry said. He added that he joined the current Welcome Home core team, in part, "because I went through that process myself" and could therefore be a good sounding board for participants.

Also in the Southern Tier, Elmira’s St. Mary Southside Parish began "Outreach to Inactive Catholics" in September 2009 under the guidance of Father Jeff Tunnicliff, parochial vicar. Father Tunnicliff and Goodman noted that their meetings largely involve the sharing of stories — by people who have fallen away from the church, and those who remain active but struggle with their faith.

Father Tunnicliff and Goodman cited a number of reasons for these bumps in the road: hard feelings over perceived mistreatment by a parish leader or staff person; being misinformed about church teachings, especially in matters of divorce and annulments; such outside factors as financial struggles, broken relationships or health issues; or simply letting their devotion slip. Parry added that "some people think the church isn’t liberal enough, and others that the church isn’t conservative enough."

Regardless of why they fell away, Father Tunnicliff said he views participants’ willingness to talk about their inactivity as a real desire to deepen their faith.

"We believe it takes great courage for these people to come," he said.

Father Tunnicliff observed that welcome-back efforts are vital in this day and age, pointing out that "with less than 40 percent of Catholics regularly attending church, it is something we know we need to do." On the other hand, he said that "it is not just about numbers. Our current diocesan spiritual renewal, Spirit Alive!, began by encouraging us to work on our personal relationship with Jesus."

Everybody plays a part

Along with the Corning and Elmira programs, outreach efforts have taken place recently at St. Vincent de Paul Parish in Church­ville, where a phone-calling campaign was based on a similar initiative at St. Patrick Parish in Victor. The effort has featured volunteers calling every parishioner, whether active or inactive, striving to make personal contact.

However, Shannon Loughlin raises the point that it’s not just up to pastoral leaders or program organizers to reach out to inactive Catholics.