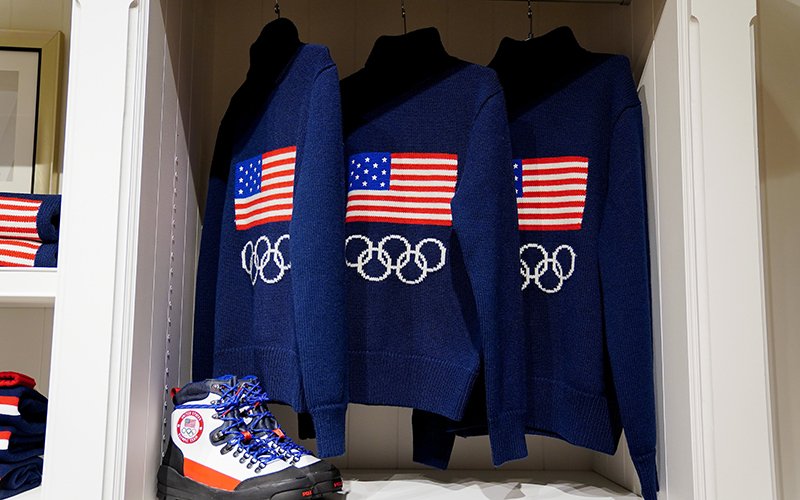 Uniforms that will be worn by U.S. athletes at the closing ceremony of the 2022 Beijing Winter Olympics are seen in New York City Oct. 28, 2021. The White House announced Dec. 6 that the U.S. will stage a diplomatic boycott of the upcoming Winter Olympics to protest Chinese human rights abuses. (CNS photo by Carlo Allegri, Reuters)

WASHINGTON (CNS) — The Biden administration’s diplomatic boycott of the 2022 Winter Olympics and Paralympics in Beijing sends “a strong and unequivocal message” to the Chinese government that its persecution of religious minorities will not be tolerated, said the U.S. Commission on International Religious Freedom.

“The Chinese government’s systematic, ongoing and egregious violations of religious freedom and other human rights of Uighur Muslims, Tibetan Buddhists, Christians, Falun Gong practitioners and many others betray the Olympic spirit,” Turkel said. “In fact, a genocidal regime should not have been granted the privilege to host the Olympics in the first place.”

U.S. Rep. Chris Smith, R-N.J., who has held several congressional hearings on China’s religious and human rights abuses over the years, said that “rather than applauding” the administration’s diplomatic boycott, “we should recognize it for what it is: an exceedingly weak gesture in response to a genocidal regime, which is increasingly acting as if it has no place within the community of civilized nations.”

At her regular briefing Dec. 6, White House press secretary Jen Psaki told reporters that President Joe Biden and his administration decided on the diplomatic boycott because of China’s “ongoing genocide and crimes against humanity in Xinjiang and other human rights abuses.”

The boycott does not extend to U.S. athletes, Psaki said.

The last time the U.S. implemented a full boycott against the Olympics was in 1980 under President Jimmy Carter. Moscow was hosting the Summer Games and Carter announced the boycott after the Soviet Union invaded Afghanistan.

“The athletes on Team USA have our full support,” Psaki said. “We will be behind them 100% as we cheer them on from home. We will not be contributing to the fanfare of the Games.”

“U.S. diplomatic or official representation would treat these Games as business as usual in the face of the PRC’s egregious human rights abuses and atrocities in Xinjiang. And we simply can’t do that,” she said.

Biden has told China’s President Xi Jinping that “standing up for human rights is in the DNA of Americans,” Psaki added. “We have a fundamental commitment to promoting human rights. And we feel strongly in our position, and we will continue to take actions to advance human rights in China and beyond.”

A month earlier, when Biden raised the possibility of a diplomatic boycott of the Olympics, China said it would take “resolute countermeasures” if such a boycott were implemented.

At a Dec. 6 news conference, Zhao Lijian, spokesman for the Chinese Foreign Ministry, called the diplomatic boycott “a stain on the spirit of the Olympic charter” and a “sensationalist and politically manipulative” move carried out by U.S. politicians.

The U.S. Commission on International Religious Freedom is among a number of organizations, including human rights groups, that have been calling on the U.S. not to send government officials to the Games “if the Chinese government’s crackdown on religious freedom continues.”

In addition to urging a diplomatic boycott on the Olympics, the commission called on the U.S. “to fully enforce existing U.S. laws by imposing targeted financial and visa sanctions on Chinese government agencies and officials for severe violations of religious freedom, and to work with like-minded countries to hold China accountable.”

Smith, a co-chair of the Tom Lantos Human Rights Commission of the U.S. Congress, said that for “his abject cruelty to