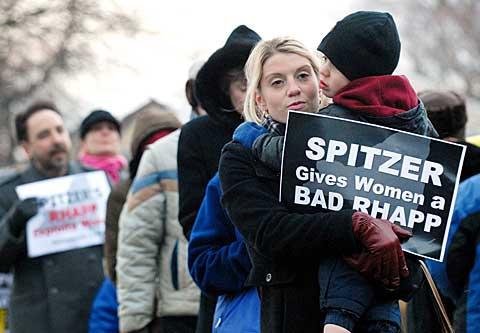 Protecting the poor during the state budget crisis, opposition to the Reproductive Health Act, and energy and climate issues are the diocesan Public Policy Committee’s three priorities for 2010-11.

Advocating for the poor is the committee’s advocacy issue and will involve a petition-signing effort in diocesan parishes on Public Policy Weekend in February 2011. Marvin Mich, subcommittee chair, said this issue takes high precedence due to the elimination of crucial programs in the proposed state budget.

"It’s a deeper set of cuts, and there are fewer options to bail us out until the economy turns around. We’re getting to the bottom of the barrel," said Mich, who serves as director of social policy and research for Rochester’s Catholic Family Center. He observed that the current recession is so acute that poverty has not only deepened among rural and urban populations, but spread to the suburbs as well.

One program that the Public Policy Committee seeks to preserve is Wheels for Work, which is receiving $7 million for the current fiscal year but stands to be axed as part of a drastic budgetary reduction in Temporary Assistance for Needy Families (TANF) funding. The program assists residents who would otherwise struggle to get to their jobs, job training or education, either by helping them obtain vehicles or offering financial assistance with car insurance and/or repairs. Wheels for Work is offered through several diocesan Catholic Charities agencies.

"We just feel that’s a very important tool, to keep people from slipping back into poverty," Mich said of Wheels for Work. He added that Catholics at the parish level also can step up their efforts to assist the poor — "not just thinking government will fix this, but what can we do as church?"

Meanwhile, the Public Policy Committee is focusing on the Reproductive Health Act as one of its two educational priorities. This bill stands in stark contrast to Catholic teaching by seeking to ensure legalized abortion throughout all nine months of pregnancy. RHA also would also make abortion immune to any state regulation or restriction, including parental notification for abortions performed on minors, restrictions on taxpayer funding for abortion and informed-consent requirements for pregnant women.

"Parents are concerned that their daughters may be undergoing surgical procedures or exposing themselves to powerful chemical agents to abort a child, with no counsel from the people who know and love them best," commented Jann Armantrout, diocesan life-issues coordinator, adding that RHA would even allow people other than physicians to perform abortions.

Armantrout said this bill holds significant immediate concern because it "could begin to legislatively move at any time. The people of our diocese need to know what is contained in the bill (and) just how exclusive of any law, rule or regulation of abortion it is." She added that New York state is "already the most liberal state in the union for abortions, half of which are paid for with state tax dollars and half of which are the woman’s second, third or fourth abortion" and that opponents of RHA must make themselves heard against the likes of Planned Parenthood, Family Planning Advocates and the state Civil Liberties Union.

Opposition to RHA also is being mounted by the New York State Catholic Conference. Catholic conference officials noted that RHA was introduced in the state Assembly on June 17, matching a bill already in the Senate that is actively supported by Gov. David Paterson. With time running out on the 2009-10 regular legislative session, the Catholic conference is urging people to take action now by visiting its website where an editable e-mail message voicing opposition to RHA is available to send to state legislators.

The Public Policy Committee’s second educational priority is based on scientific findings that the earth’s climate is being altered, with human activity being the likely cause and possibly resulting in many dangerous changes during the 21st century. The committee added that energy production and consumption are strongly related to this concern, citing Pope Benedict XVI’s call for worldwide consumption reduction, efficiency improvement and efforts to use forms of energy with minimal impact on the environment.

According to Kathy Dubel, justice-and-peace coordinator for Catholic Charities of Chemung/Schuyler, education and awareness for this public-policy priority are being geared toward the feast of St. Francis of Assisi, patron of ecology, on Oct. 4. Dubel said Bishop Matthew H. Clark has signed on to the St. Francis Pledge to Care for Creation and the Poor, an initiative of the Catholic Coalition on Climate Change. The coalition was created by the U.S. Conference of Catholic Bishops in 2006.

"We hope to invite parishes and schools to follow Bishop Clark’s lead and sign on to the pledge," Dubel said, adding that further information on the pledge may be found by visiting www.catholicsandclimatechange.org.