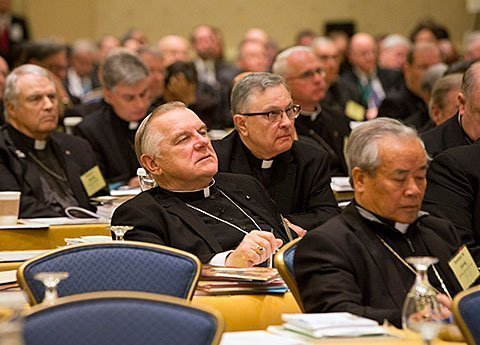 Members of the U.S. Conference of Catholic Bishops attend the opening session of their annual fall meeting Nov. 11 in Baltimore.

BALTIMORE (CNS) — A Nov. 11 presentation assured the U.S. bishops meeting in Baltimore that their priorities for 2013-16, approved unanimously last year, are being met.

"We continued to make important progress in meeting the critical priorities" set by the bishops, said Archbishop J. Peter Sartain of Seattle, chairman of the U.S. Conference of Catholic Bishops’ Committee on Priorities and Plans.

He delivered an oral report on the first day of the USCCB’s annual fall general assembly.

The priorities and plans were compiled in a document, "Journey With Christ: Faith, Worship, Witness." Its four top priorities are to continue efforts to protect the life and dignity of the human person, to strengthen marriage and family life, to promote religious liberty, and to improve faith formation and sacramental practice.

"Through our focus on witness and discipleship, committees are working to strengthen the understanding of the Christian vocation lived through public witness to Jesus Christ," Archbishop Sartain said. "These efforts are focused through the life and dignity of the human person, religious liberty, and the promotion of marriage as a union of one man and one woman."

Archbishop Sartain cited several accomplishments over the past year, including:

— Providing resources to encourage Catholics to take advantage of the sacrament of penance and to help promote God’s gift of forgiveness.

— Producing the pastoral statement "Stewards of the Tradition: Fifty Years After ‘Sacrosanctum Concilium,’" the Second Vatican Council’s Constitution on the Sacred Liturgy.

— Conducting training and education initiatives to continue to implement the bishops’ preaching document "Preaching the Mystery of Faith: The Sunday Homily," which they approved last November to encourage preachers to connect the Sunday homily with people’s daily lives.

— Creating an online USCCB new evangelization tool kit online to bring evangelization initiatives together in one place as resources for pastoral planning for dioceses that want to make use of it.

— Rebuilding church structures in Haiti following the 2010 earthquake there.

— Carrying out activities connected to the Fortnight for Freedom and ongoing promotion of the "Call to Prayer for Life, Marriage and Religious Freedom."

— Publishing resource guides, bulletin inserts and online resources on the life and dignity of the human person, migration and pastoral care for refugees, respect for all life, and concern for the poor and marginalized — all, Archbishop Sartain said, "to instill in Catholics an understanding and appreciation for Catholic teaching" in all those areas.

After Archbishop Sartain’s presentation, retired Archbishop Joseph A. Fiorenza of Galveston-Houston, a former USCCB president, asked whether an addition to the priorities could be made in order to recognize the priority for the poor outlined by Pope Francis.

"Do you think that the Committee on Priorities and Plans can now take a lead for our Holy Father and approve and make clear that he desires to see a church of the poor and a church for the poor, and make that a high priority of our conference, too?" Archbishop Fiorenza said.

"We would work diligently to support not just the Catholic Campaign for Human Development but also to do other things which would help the poor," Archbishop Fiorenza continued, "so that their human dignity should be more highly achieved by eliminating the oppressive poverty under which they live. We would be more diligent in trying to eliminate all those things that keep for the poor from accessing full human dignity, from accessing basic health care, from accessing decent work, decent living conditions — things that I understand contribute to full human lives."

He added, "Our (bishops’) conference should be on record as supporting what Pope Francis put before us, to be a church of the poor and a church for the poor."

The priorities as currently set by the U.S. bishops, according to Archbishop Fiorenza, are "missing this one essential."

"We didn’t have this put before us in the church in the beautiful way Pope Francis did before you probably started all this good work. But now he has come upon the scene. … Now he has given us his side. … It seems to me that this conference, this body of bishops, should somehow touch into that," he said.

"I think all of us have been struck move by his call to be a church of the poor and a church for the poor," Archbishop Sartain said of Pope Francis. "I can tell you among our group, there has been great openness to what he has said."