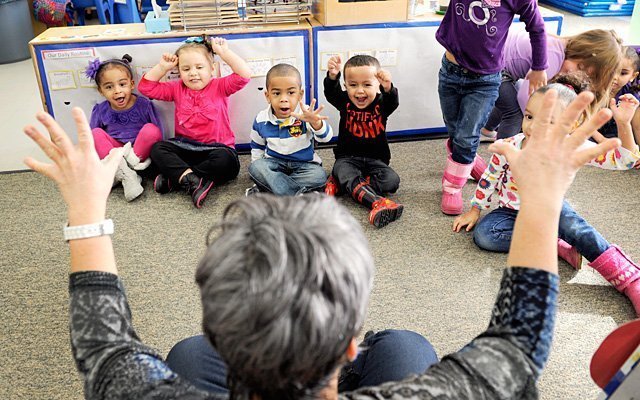 Children at a Rochester child-care facility interact with their teacher in this 2013 file photo. One of the priorities of the 2015 diocesan Public Policy Committee is to secure additional funding for child care.

ROCHESTER — Admirable as their efforts may be, Catholics in the Diocese of Rochester cannot stop at charitable giving in helping the poor. Rather, they must also work toward reducing poverty for the long haul.

That’s the contention of Marvin Mich, director of advocacy and parish social ministry at Rochester’s Catholic Family Center. He bases his assertion on a report released in January 2015 by the Rochester Area Community Foundation, which rates Rochester as having the highest poverty rate in the United States among cities of similar sizes.

The report, Mich said, serves as "an undeniable catalyst" for his concern that simply giving to the poor is not enough in tackling local poverty.

"We have to look at this in a new way," he stated.

Poverty in Monroe County and the diocese’s other 11 counties will be a focal point in the upcoming year for the diocesan Public Policy Committee, of which Mich is a member. In recently releasing its agenda for 2015-16, the committee named impoverished children and families as its advocacy issue.

The committee will promote that issue over the next several weeks in preparation for its annual Public Policy Weekend, set for Feb 6-7. At that time, parishioners in diocesan churches will sign petitions that will then be forwarded to Albany.

Mich noted that the petitions will be a continuation of a letter-writing campaign that took place in parishes this past October. That effort sought to secure $190 million of additional state funding in the upcoming budget year to provide child-care funding for low-income working parents.

Should that funding come to pass, it will mark the second straight successful year for the Public Policy Committee regarding its advocacy goal. In 2014-15, the committee’s focus was the Women’s Equality Act and its proposed expansion of abortion rights as one of that bill’s 10 points. In early 2015, Gov. Andrew Cuomo agreed to drop the abortion part of the bill. The other nine points were subsequently passed by state lawmakers, supporting women in such areas as pay equity, sexual harassment, pregnancy discrimination, human trafficking and domestic violence.

However, in regard to the current advocacy issue, Mich said that it will take more than petitions, state funding and other financial support to curb the staggering level of poverty in local communities. He emphasized that diocesan Catholics also must explore models that actually move people out of poverty. For instance, he said the committee is looking into fostering stronger relationships between urban and suburban parishes — "connecting across the lines," he said.

"Would you be willing to get to know these people? Could you exchange pulpits?" Mich said, adding that this type of sharing would hopefully result in ideas and structured initiatives to help impoverished people more permanently better their lives.

In addition to Public Policy Committee’s emphasis on poverty, its 2015-16 agenda will feature two education issues: physician-assisted suicide and Laudato Si’, Pope Francis’ encyclical on ecology. Multiple resources for all these priorities are available at www.dor.org/index.cfm/catholic-charities/.

Informational packets on the education issues were due to arrive in parishes in early December. From there, parish-based efforts will include hosting discussions and posting bulletin notices and fact sheets.

According to Mich, physician-assisted suicide is a key issue for Catholics due to increasing challenges to New York state’s ban on this act. The practice of doctors prescribing lethal doses of medication for terminally ill patients conflicts with Catholic Church teaching about the sanctity of all human life, from conception until natural death. However, in early October, California became the fifth state to allow physician-assisted suicide.