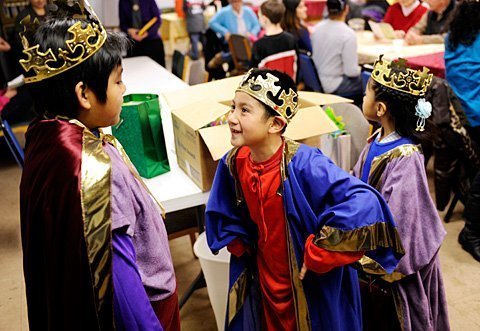 Nine-year-old Irving Jiménez (from left), 6-year-old Nico Gutierrez and 5-year-old Emily Ruiz play the roles of the Three Kings during a Jan. 6 Three Kings Day celebration at the VFW Hall in Mount Morris.

MOUNT MORRIS — The three kings who paraded out to greet guests and pass out candy were not only small in stature, they were technically two kings and a queen.

The children — Irving Jiménez, 9; Nico Gutierrez, 6; and Emily Ruiz, 5 — took part in a Three Kings Day celebration on Jan. 6 presented by the Livingston County Arts Council and St. Luke the Evangelist parish at the VFW Post 547. A Mass in Spanish at St. Patrick Church, which is part of St. Luke the Evangelist Parish, preceded the festivities.

The event was one in a series of presentations focused on "festive foodways" and how certain foods are connected to special celebrations in different cultures, explained Karen Canning, traditional arts program director for the Genesee Valley Council on the Arts. The Livingston council is one of four organizations that belong to the GVCA, she added.

The GVCA is "here to document, take notice and also educate the general public about the different cultures here," Canning said.

"A lot of traditions continue through food," she continued. "When we get together and celebrate, oftentimes food is something that lasts longer than other things, even language. … (Food) stays for our whole lives. And especially at party times, the special things come out."

So, in addition to the three kings, the celebration included dishes that no Puerto Rican or Mexican celebration of the feast day is complete without, she said. They included rice, roasted pork, pasteles (stuffed meat pastries made from plantains and root vegetables), flan, Rosca de Reyes (Three Kings bread) and a piñata.

The idea to bring the Puerto Rican and Mexican communities together was part of the event’s mission as well, Canning said. Puerto Rican residents began moving into the village of Mount Morris about 25 years ago, while Mexican immigrants are more recent arrivals, she added.

"They don’t necessarily mix in the same circles, so this was fun" to have them share their traditions with each other as well as the non-Hispanic community, Canning noted.

"St. Luke’s and Livingston County are still waking up to the presence and gifts of the Puerto Rican and Mexican communities in our midst," Mike Sauter, the parish’s pastoral administrator, noted in an e-mail. "In this new venture, it was a great benefit to work with the Council on the Arts because, like so many holidays, Three Kings is a cultural as well as religious celebration. Our Mass was, obviously, Catholic. The party that followed, however, was one of the most diverse and ecumenical gatherings it’s been my privilege to see in Livingston County. "

Estela Gutiérrez, a Mexico native, said she also enjoyed having the two Latino communities join together for the celebration as she sat with her family and tried many of the different dishes.

"We get to know each other and learn more about their traditions and foods," added Gutiérrez, who prepared buñuelos (fritters) for the event.

Another tradition that is part of any Latino holiday is music, and Alma Pérez sang along with all of the traditional Spanish Christmas songs that were playing Jan. 6.

She always celebrates Three Kings Day with her children and grandchildren and gives them all gifts on that day as well as on Christmas Day, said Pérez, who moved to Mount Morris from Puerto Rico 19 years ago.

She said she was thrilled when she read about the event in the local shopping guide.

"I was surprised," Perez said. "This is the first time I ever heard about anything like this. But I really liked the idea of recognizing Hispanics living here."