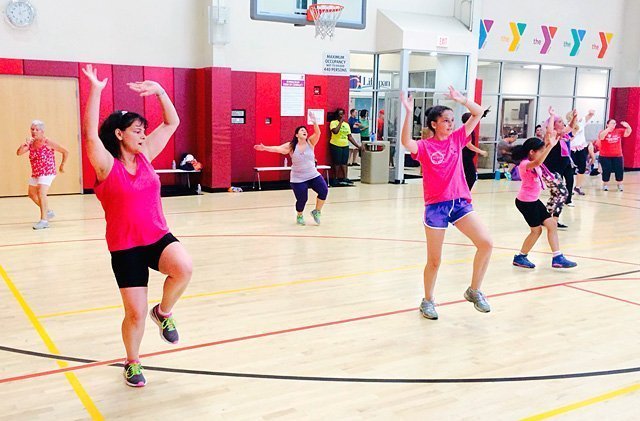 Jennifer Gaudino (left) and her daughter, Cecilia Hoskins, take part in a zumba class that was offered Aug. 10 as part of the Rochester Latino Rotary Club's "Dance to Health" at the Maplewood YMCA in Rochester.

ROCHESTER — Abraham Hernández has lost 175 pounds over the past five years by modifying his diet and simply walking every day.

Before losing weight, he had considered gastric-bypass surgery. He had been approached by weight-loss programs for endorsements. And he thought he had reached his lowest point when as a salesman for a semiconductor company, he was forced to buy two plane seats for a trip and could not fit into a booth during an appointment with clients at a restaurant, Hernández explained.

"Imagine the humiliation," he remarked.

But what finally prompted him to begin losing weight was a conversation he had one day with his grandson, who was in the back yard and wanted him to play baseball.

After that conversation with his grandson, he ditched the surgery idea because his doctor knew Hernández would still want to eat his "red beans and rice." He did do as she advised, however: eat less of his favorite foods and walk more, since he liked walking.

"That about changed my life," he said. "You’ve got to make the commitment (to lose weight). We want everything quick and easy. But this (change) is permanent."

"Mr. Hernández’s successful weight loss is an example of the kind of weight loss that will stay with him," said Barbara DeVinney, the Greater Rochester Health Foundation’s vice president and chief program officer. "It’s a lifestyle change instead of a diet. He’s a wonderful, wonderful role model."

As president of the Rochester Latino Rotary Club, Hernández shares his story to educate not just the Latino community but the entire community about ways to be healthier. Two years ago, the club held a "Dance to Health" event at the Metro YMCA to provide more information on the need to eat healthier and move more. This year’s Aug. 10 event at the Maplewood YMCA attracted about 30 people who danced with several volunteer zumba instructors in the gym.

Hernández said the club is going beyond this one-time event this year by piggy-backing on the national "Healthy People 2020" initiative that began almost three decades ago by the U.S. Department of Health and Human Services to reach set goals each decade. Among the 2020 goals are to "promote health and reduce chronic disease risk through the consumption of healthful diets and achievement and maintenance of healthy body weights," according to information on the healthypeople.gov website.

The country needs to address obesity, which affects people across genders and cultures, as life in general has become more convenient, noted Anja Devins, Maplewood YMCA’s fitness coordinator. For example, having access to information or people at the touch of a button means people move less, she said.

Some people also have the misconception that exercise is only for fit people, she added.

"It is essential for everybody," she said, noting that this is part of the reason the Maplewood YMCA was glad to partner with the Latino Rotary for this year’s "Dance to Health" event.

"We encourage members to move, just move," Devins added. "It doesn’t matter what you do."

As part of its healthy weight campaign, the Latino Rotary Club also wants to partner with other local organizations to educate the public about the free and simple options available to reach a sustainable weight loss as he has, Hernández said.

Despite high rates of diabetes, heart disease and hypertension among Latinos, unfortunately, fitness and diet are not first in the minds of too many in the Latino community, added Luisa Baars, the Latino chapter’s founder. And all of those medication conditions are preventable with a good diet and exercise, she said.

Baars said she had been scheduled to begin dialysis four years ago to treat her hypertension but instead began an exercise regimen and reduced the sodium in her diet.

Sharing such success stories and working together can help address obesity, DeVinney noted. The foundation also funds programs that aim to prevent and reduce obesity in children, including its "Healthy Hero" campaign.

Something as simple as encouraging "dance night" for parents of younger children works, she said.

"There are many stones we cast out there, and each creates its own ripple. And eventually those ripples will start touching one another. Then we will have a healthy society," she noted. "There’s no one fix. … It is changing meals in schools. It (obesity) is multifactorial. And every program helps to work on it."

Hernández has created a Facebook page to record his progress as he strives to lose another 40 pounds. His family also has joined in and altered their meals and are exercising more, he said.

"We talk about people going off drugs or alcohol, but (addressing) losing weight is taboo," Hernández said. "We’re asking people to think about changing their lives."