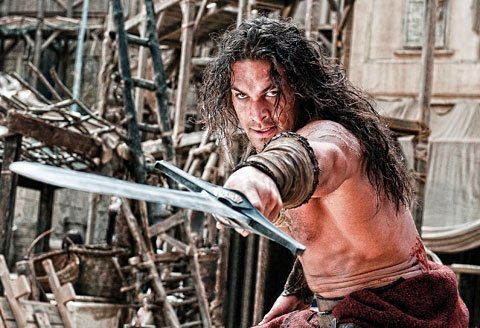 NEW YORK (CNS) — Bringing 21st-century moviemaking techniques to the sword-and-sorcery subgenre, the makers of "Conan the Barbarian" (Lionsgate) have delivered up a blood-saturated piece of hokum. Although visually dynamic, the 3-D action-adventure is exceedingly violent and bereft of any positive message.

In the role that brought Arnold Schwarzenegger to prominence back in 1982, Jason Momoa plays the eponymous warrior. Bent on avenging his father’s murder, which he witnessed as a boy (after literally being born on the battlefield), Conan pursues the culprit, Khalar Zym (Stephen Lang), throughout the mythical land of Hyboria.

The stakes are raised when warlord Zym and his half-witch daughter, Marique (Rose McGowan), kidnap the last descendant of the House of Acheron, a martial arts maiden named Tamara (Rachel Nichols). Tamara’s blood has the ability to reanimate an ancient mask, thus giving Zym supreme powers.

About two-thirds of the way in, Conan expresses his philosophy: "I live. I love. I slay … I am content." He’s right about the slaying part, but the only values he upholds are filial loyalty and an antipathy toward slavery. Regrettably, he demonstrates the latter by urging freed slaves to kill their former captor in a distinctly cruel and inhumane manner.

With Marcus Nispel — who specializes in directing remakes (such as 2003’s "The Texas Chainsaw Massacre" and 2009’s "Friday the 13th") — at the helm, the production values are quite impressive. The expected cheesiness is minimized by solid cinematography and special effects; and the 3-D format proves more of a plus than is often the case.

As for the plot, the three credited screenwriters — Thomas Dean Donnelly, Joshua Oppenheimer and Sean Hood — attempt to ground the mayhem in a relatively detailed legend about the pagan milieu, based on the 1930s pulp fiction of Conan creator Robert E. Howard. Alas, with few respites from the brutality, the story quickly becomes irrelevant.

As one fight sequence follows another, blood appears to begin spurting even before the sword blows have landed.

No mercy is shown for anyone on, or off, the screen. And since no social or moral values, other than those mentioned above — and, perhaps, brute physical courage — are actually affirmed, the numerous objectionable elements listed below stand out all the more starkly.