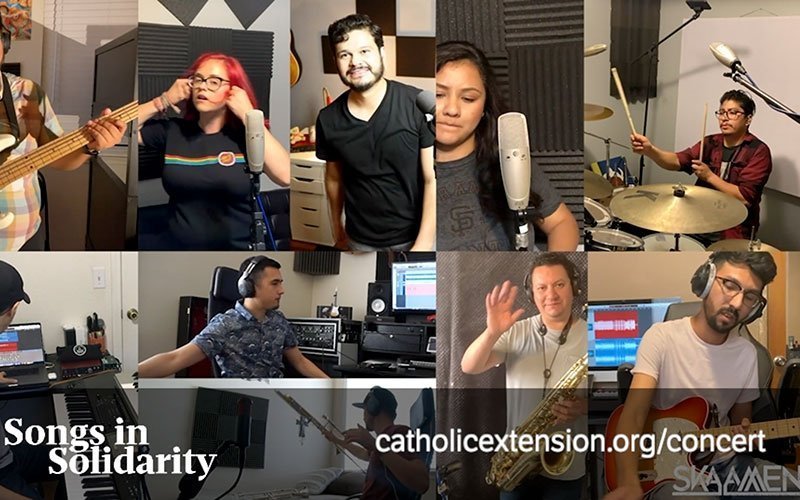 This photo is part of promotional campaign for the Catholic Extension's program "Songs in Solidarity," which is billed as special performances by Catholic artists from U.S. mission dioceses helped by Extension. (CNS photo courtesy of Catholic Extension)

CHICAGO (CNS) — Catholic Extension’s online concert series aims to lift people’s spirits during a time of struggle and uncertainty caused by the pandemic, while also promoting the vitality of the Catholic faith in the poor communities in U.S. mission dioceses supported by the Chicago-based organization.

Twice weekly, Catholic Extension hosts watch parties of livestreamed concerts on its website, www.catholicextension.org, and its Facebook page from various artists across the country. These include including a Christian rapper from Arkansas, Jaime Torres (“El Serio”), Mariachi Nuevo Santander from South Texas, Jossie Santiago from Puerto Rico and many others.

Catholic Extension launched “Songs in Solidarity” March 31 to support mission dioceses across the country who, already struggling for daily survival, have been thrown into further turmoil because of COVID-19.

The concert series invites those watching to join Catholic Extension in solidarity to support the communities from where the various artists hail. The money raised will be used to directly help mission dioceses that already operate on limited budgets and have been adversely impacted by the complete loss of weekly collections due to church closures.

In a news release on the “Songs in Solidarity” series, Catholic Extension said it is seeking more artists to perform in the concerts and urged those interested to contact Veronica Avila at vavila@catholicextension.org for more information.

Catholic Extension, which has been supporting the work and ministries of U.S. mission dioceses since its founding in 1905. It raises and distributes funds to support these dioceses, many of which are rural, cover a large geographic area, and have limited personnel and pastoral resources.