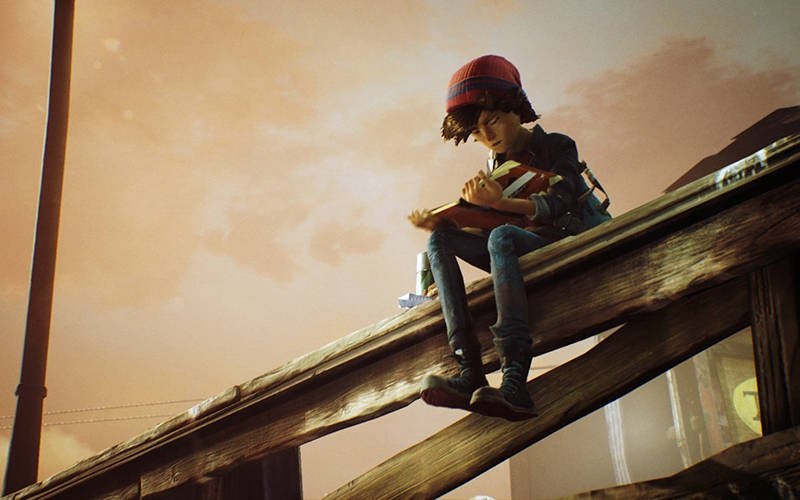 This is a scene from the video game “Concrete Genie.” (CNS photo by Sony)

NEW YORK (CNS) — Given that “Concrete Genie” (Sony) won the Gamescom award for Best Family Game, parents will find little in it to concern them. The presence of monsters and some stylized mayhem, however, may make this title too scary for the very youngest players.

Set in a polluted town called Denska, this is the story of Ash (voice of Simon Lathrop), a young boy whose art has the potential to restore life and vibrancy to his contaminated community. A quiet lad, Ash loves to draw in his sketchbook. But one day, a group of bullies steal the volume, tear it apart, and stuff Ash into a tram bound for an island that’s home to a lighthouse.

There, Ash spies some of his scattered pages and, in chasing after them, discovers that one has come to life. Luna, a creature he doodled, guides Ash to a magical paintbrush that will vivify other drawings. Ash uses it to create his first genie, a helpful being who travels with him on his backpack.

Luna also shows Ash that his new tool can cleanse the purple mold by which Denska’s atmosphere has been darkened and because of which many of its residents have abandoned the town for good.

The game encourages players to use their creativity and imagination as they control Ash’s persona. Genies, for instance, can be adorned with a variety of decorations — flowers, horns, vines — and endowed with different powers depending on the color used to paint them. Thus, red genies breathe fire, clearing out new areas for Ash to access.

Gamers start out in a single neighborhood, but new areas open up as regional objectives are completed. The goal is for Ash to paint the entire town while avoiding the thugs who attacked him and now want to destroy his new handiwork.

The painting mechanic requires practice since it uses PlayStation’s motion-control sensors. Aesthetically, though, the design is rich and attractive, providing gorgeous art styles accompanied by heartfelt musical compositions and a story line that make this title well worth exploring.