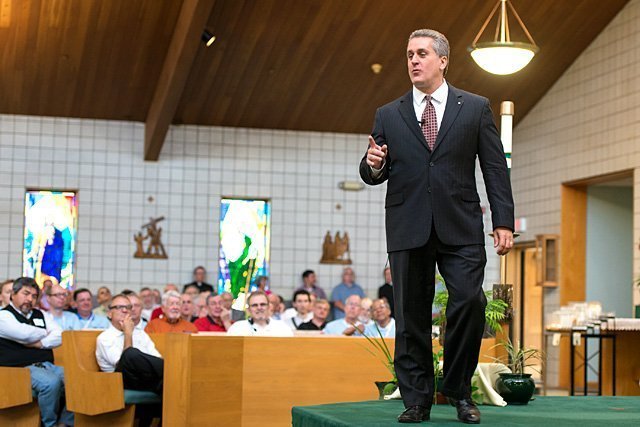 The second-annual Rochester Catholic Men’s Conference on Oct. 1 will look to "Strengthen our Brothers" and encourage men throughout the diocese to form fellowship groups in their own parishes.

The event’s theme of strengthening each other comes from Luke 22:19, explained Father Edison Tayag, pastor of St. Patrick Parish in Victor: "But I have prayed that your own faith may not fail; and once you have turned back, you must strengthen your brothers." Chaplain for the men’s conference as well as the Rochester Catholic Women’s conference, Father Tayag organized last year’s inaugural event for men.

"I do hope that the men’s conference … would bring together men of all ages from our diocese," Father Tayag wrote in an e-mail. "This year’s theme … speaks of a profound invitation for us, Catholic men, to see each other as brothers, and precisely as brothers whom Jesus entrusted to one another. In our journey of faith, there sure are ups and downs, but with us inspiring and helping each other, we are assured of making the goal, that is, finding ourselves in Jesus Christ."

Father Tayag invited the leaders of existing men’s parish groups to get involved in planning for last year’s conference. This invitation led Bill Gustafson, a member of the men’s group at Chili’s St. Pius Tenth Parish, to get involved and become chairman of this year’s planning committee.

A new component of this year’s conference, which will take place at St. Jude the Apostle Church in Gates, is offering witness to the benefits of being involved in a men’s group, Gustafson explained.

"Together with other men, we want them to sing together, worship together and come away with batteries charged and refreshed," he said. "From that, go to your parish and form a men’s group or join a men’s group."

This year’s conference will feature three guest speakers. According to information at the conference website (http://exultrochester.org/2016-2), they are:

* Jesuit Father Mitchell Pacwa, who in 2000 established the Catholic media production apostolate Ignatius Productions. He is fluent in 12 languages and was inspired by his travels throughout Israel to write The Holy Land Prayer Book. He is the host of two EWTN television programs, "Threshold of Hope" and "EWTN Live," and of the weekly "Open Line" program on EWTN radio.

* Deacon Harold Burke-Sivers of Portland, Ore., travels around the country and the world speaking about deepening one’s personal relationship with Jesus. Known as the "Dynamic Deacon," he focuses his presentations on marriage and family life, discerning the will of God, the sacraments and vocations, male spirituality, pro-life issues, and prayer. He also is a Benedictine Oblate of Mount Angel Abbey and cohosts a weekly broadcast, "Living Stones," on Mater Dei Radio.

* Patrick Coffin is the host of the "Catholic Answers Live" radio show and the "Catholic Answers Focus" podcast. He is cofounder of the independent film company Immaculata Pictures and author of Sex Au Naturel: What It Is and Why It’s Good for Your Marriage. He also is a professional magician.

"Just experiencing the power and grace when you have a gathering of all men, especially one of that size, it was remarkable," he said of last year’s conference. "As the planning committee, we were just thrilled with how it all turned out."

A few minor glitches, such as running out of breakfast items and long lines for confession, occurred last year due to low advance registration and unexpectedly high registrations on the day of the event, Gustafson said.

Nevertheless, he observed, "Overall, the experience was really phenomenal because of the spirit there, the upbeat spirit of men being able to interact with other men in the diocese, and to see so many men who cared about their growth and their (spirituality)."

EDITOR’S NOTE: Registration for the conference is $45 before Sept. 1, $50 after Sept. 1 and $55 at the door. Registrations can be completed online at https://rcmc.dor.org or by mailing a completed form available on the website with payment to Rochester Catholic Men’s Conference, PO Box 90574, Rochester, NY 14609.