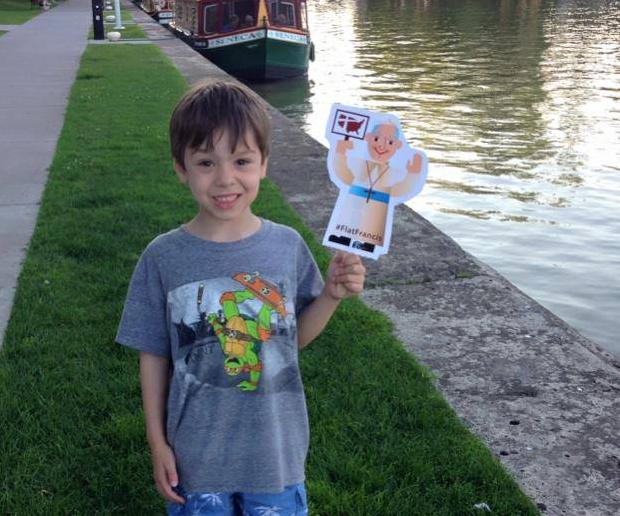 The votes have been counted and we are excited to announce the winners of our #FlatFrancis contest.

Our grand prize winner is Ryker Christensen, of Blessed Sacrament Church, Rochester. His photo of #FlatFrancis along the Erie Canal in Pittsford received 122 votes, which was the most votes received during our contest. He will win tickets to see Geva Theatre’s production of A Christmas Carol as well as his photo will be featured in the center of all our #FlatFrancis photos in our October issue.

Our second prize winner was the Zacherl family, of Holy Cross Church, Charlotte. Their photo of their five-month-old daughter with #FlatFrancis at a camp in PA received 46 votes. They won two Ride and Slide passes to Seabreeze Amusement Park in Irondequoit.

Close behind, in third place, was Denise Sochan, St. Alphonsus Parish, Auburn. Her photo of #FlatFrancis on the St. Joseph School playground received 43 votes. She has also won two Ride and Slide passes to Seabreeze Amusement Park in Irondequoit.

In fourth place, with 36 votes, was Marianne Himmelsbach and the children of Sacred Heart Cathedral Vacation Bible School in Rochester. Marianne will receive a prize package from Salvatore’s Pizzeria.

And rounding out out the top five was Shirley Curatolo, of Holy Ghost Church, Gates. Her photo of #FlatFrancis with a rain poncho on the Maid of the Mist received 26 votes. She has won tickets to an upcoming Red Wings game.

We also want to thank Catholic Extension for allowing us to do our #FlatFrancis contest with the image they created. We also want to thank our contest sponsors, Geva Theatre, Seabreeze Amusement Park, Salvatores Pizzeria and the Rochester Red Wings for providing us with the prizes for our winners.