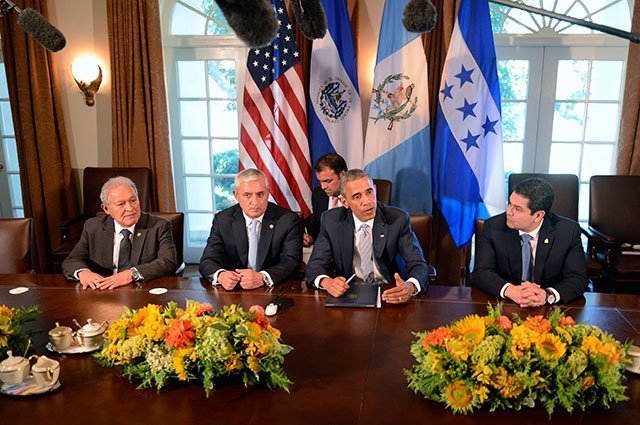 President Barack Obama delivers remarks after a meeting with Presidents Salvador Sanchez Ceren of El Salvador, Otto Perez Molina of Guatemala and Juan Orlando Hernandez of Honduras in the Cabinet Room of the White House July 25. The four leaders discussed the current crisis at the U.S-Mexico border with thousands of mostly unaccompanied minors from Central America entering the U.S. illegally.

WASHINGTON (CNS) — Members of Congress left Washington for their summer recess without approving funding to help manage the surge of unaccompanied minors and families that has been taxing the resources of federal agencies.

Meanwhile, both the activists who favor smoothing the path for the immigrants and those who want to deport them more quickly ramped up public campaigns directed at Congress and the White House. At the same time, churches and other organizations pulled together housing, legal aid and emergency services for the kids and families.

In a series of posts in diocesan and secular newspapers, bishops around the country have offered various types of assistance, and many have called for legislative and administrative actions to protect the migrants and to help prevent violence and other problems in their home countries that have prompted the departures.

The end of July and early August saw protests in Washington and across the country, including the arrest of more than 100 religious and civil rights leaders outside the White House July 31, who were urging action to protect migrants. Across the southwest, a Border Convoy was traveling from Murrieta, Calif., to McAllen, Texas, staging "stop the invasion" events in several cities along the border.

President Barack Obama first focused attention on the surge of migrants in early June, announcing a series of responses including shifting immigration judges and other federal staff among agencies to address backlogs, and funding programs in the sending countries to address societal problems and debunk rumors that the U.S. was allowing children to stay in the country without consequences. A few weeks later, he requested $3.7 billion in supplemental funding to handle what he described as a humanitarian crisis.

Congress responded by introducing vastly different supplemental funding bills in the House and Senate, neither of which appeared to have a chance of passing in the opposite chamber.

The House Aug. 1 stayed a day past its scheduled recess date to take a second crack at a bill that would provide $694 million in supplemental funding for agencies that deal with the influx.

It also would change a 2008 law that requires the government to allow minors from Central America to have time to seek protection in the U.S., instead of being immediately returned home, as is the case with such immigrants from Mexico. The House bill would deport those children in a matter of a few days, instead of allowing them to seek refuge under various laws. The process has been taking more than a year, during which time the minors typically are in the custody of family members in the U.S.

The House was able to pass that bill in a 223 to 189 vote by promising to take a vote on a second bill which passed later that day. It would block the renewal of the Deferred Action for Childhood Arrivals program, known as DACA, through which about 600,000 young people who were brought to the U.S. as children have been able to avoid deportation and obtain permission to work while registering with the government.

The Senate, on the other hand, introduced a bill with $2.7 billion to fund government response to the surge, but was unable to get the 60 votes necessary to bring it to a filibuster-proof floor vote before recessing until after Labor Day.

In one of many blog and op-ed articles on the situation by church leaders, Seattle Auxiliary Bishop Eusebio L. Elizondo, who chairs the U.S. bishops’ migration committee, said in an Aug. 2 column in The Washington Post that the debate can "be boiled down to one clear choice: Protect them and give them due process or change the law and send them back to possible death. While some may disagree with this characterization, the truth is inescapable, as are the life-and-death consequences facing this most vulnerable population."

Bishop Elizondo observed that Congress and the administration "are twisted in knots over a situation that many nations around the world handle as a matter of course. The difference is that other nations receive millions of refugees, not just thousands. Lebanon, for example — a country of 4.5 million — has received more than 1 million Syrian refugees in the past two years. Can we not do right by a much smaller population?"

Since the start of the fiscal year in October, through June 30, more than 57,000 children unaccompanied by a parent or guardian have been apprehended at the U.S. border, the vast majority in the Rio Grande Valley of Texas. The figure is about double the 27,800 of the previous year-to-date. In the same period, the Border Patrol had taken into custody more than 55,000 families with children, a nearly 500 percent increase over the 9,400 of the previous year-to-date. The vast majority have come from Honduras, Guatemala and El Salvador, which have some of the highest murder rates in the world.

That influx overwhelmed the resources of the Border Patrol, which is required by law to process them quickly, and move unaccompanied minors into the custody of the Office of Refugee Resettlement under the Department of Health and Human Services.

Temporary arrangements — such as keeping hundreds of children in huge warehouses maintained by the Border Patrol and releasing families with no resources at bus stations around the Southwest — prompted an outpouring of humanitarian responses by the public and faith organizations.

On Aug. 4, the administration announced it would soon close three emergency shelters at military bases. About 7,700 minors had been housed at such shelters at Fort Sill, Okla., Joint Base San Antonio-Lackland in Texas and Naval Base Ventura County-Port Hueneme in California since May. The Associated Press reported that the reason given was that fewer children were being apprehended, for a variety of reasons, and that other types of housing would be adequate.

In late July, the administration announced that the number of minors being apprehended at the border daily had dropped from about 2,000 a week in June to about 500 a week in mid-July.

The Office of Refugee Resettlement has been pursuing short- and long-term housing options around the country. Many churches, religious orders and dioceses have responded by offering their facilities. ORR has a screening process for any location it uses for housing minors, whether an institutional one or with a family member or foster home.