Connecting our actions with our faith - Catholic Courier 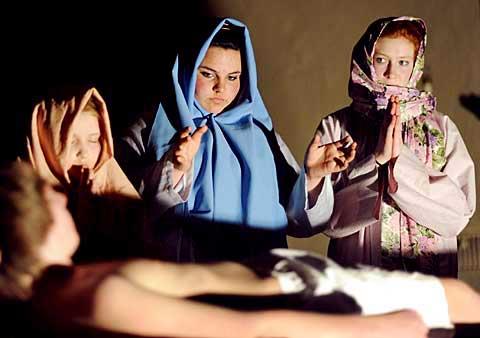 Mackenzie Hoven (center), playing the role of Mary, is joined by Mara Jankowski (left) and Shannon Dole during a Living Stations of the Cross performance at St. Francis Church in Phelps March 26. Father Mike Sergi says Mary is a scriptural model of discipleship because she trusted in God and pointed others toward her son.

As the diocese concludes its three-year Spirit Alive! spiritual renewal, attention has turned to how to get people to live their spirituality in all that they do, as well as how to share that spirituality with others.

Helping people connect what they believe with what they do is the reason for a diocesanwide focus on discipleship, said Maribeth Mancini, director of the diocesan Department of Evangelization and Catechesis.

"I think the last three years have been developed as a way to support people’s journey of discipleship, through reconciliation, through understanding their gifts, and through growing in knowledge and love of the word — both the Word (Jesus) and the word (Scripture)," Mancini said.

Representatives from each parish will be present at diocesan celebrations of discipleship May 22 and 23, to mark the culmination of the spiritual renewal at Pentecost. These representatives will be asked to return to their parishes and help people recall their discipleship, Mancini said.

But what does it mean to be a disciple?

As Redemptorist Father Mike Sergi puts it, a disciple is the opposite of the Frank Sinatra song, "My Way."

"It’s not doing it our way; it is doing it Christ’s way," said Father Sergi, rector of Notre Dame Retreat House in Canandaigua.

In Matthew 28:19-20, Jesus commissions his followers: "Go, therefore, and make disciples of all nations, baptizing them in the name of the Father, and of the Son, and of the holy Spirit, teaching them to observe all that I have commanded you. And behold, I am with you always, until the end of the age."

In this passage, Jesus reveals the beginning point of discipleship: baptism.

Baptism begins a lifelong process of conversion, added Shannon Loughlin, diocesan director of young-adult and campus ministry. Christians are constantly called to grow in their understanding of what it means to be holy, she said.

"To do that well, you need to discern your gifts and apply that to all aspects of life," Loughlin said. "Your gifts grow and change."

Mancini noted that disciples also are called to live out their faith through their interests and in their daily lives — not just in their faith communities.

"When they face difficult personal circumstances — the death of someone they love, illness that is debilitating or the loss of a loved one who is drug-addicted — the way they live through those sufferings is linked to their faith," Mancini said.

Loughlin said it’s also important for faithful people to share with others that faith is the reason for their actions, yet she acknowledged that message is not always well-received.

Father Sergi pointed out that just as Christ experienced rejection from members of his family and hometown, so do we find it tough to be disciples.

In addition to being counter-cultural, true disciples also may feel like they are never able to satisfy the need to help others, he said.

"(Discipleship is) always going to challenge us to change, and basically what happens when you work to change is you continue to become holy," Father Sergi said.

Holiness and salvation are some of the benefits of becoming a disciple, Father Sergi said, but a disciple’s actions also can make positive changes in the world.

He cited the example of Blessed Teresa of Calcutta, who by serving the poor in India set an example for the rest of the world. He said Mother Teresa was a personal friend who often visited a Baltimore AIDS hospice run by her order; the hospice was located at a parish where he was rector.

He recalled complaining to Mother Teresa about the complexities of daily life and running a parish. She advised him to spend an hour in front of the Blessed Sacrament in adoration.

"You have to trust in God," Father Sergi said Mother Teresa would tell him over and over. "That’s what you need to do with everything. You can’t be in control."

We can look to Mary for a scriptural model of discipleship, Father Sergi said, noting that Mary turned to her son for help at the wedding at Cana and directed servants to do what he told them.

"Her discipleship was a total trust in God, and she is always pointing people toward her son," Father Sergi said.

Discipleship examples also can be found in those who surround us. Loughlin cited the example of a child who gets others to stop teasing another child just because it’s the right thing to do. In the workplace, an adult could look to Jesus’ example when confronted with gossip or a racist joke.

Yet disciples need to know they do not stand alone, Mancini noted. They are rejuvenated by their faith communities and spiritually nourished by the Eucharist.

"(A community) is where we are called to encourage each other and support each other," Mancini said.

Yet, though people may be part of a parish, their discipleship should not be confined to the walls of their church, Father Sergi said.

"If you are true disciple, it calls you to go out to people," he said.

The command to go forth also was at the heart of the U.S. Conference of Catholic Bishops’ 1992 pastoral letter on evangelization, "Go and Make Disciples." The letter’s three goals were for Catholics to develop such an enthusiasm for their faith that they live it and freely share it, for all people to be invited to hear the message of salvation in Jesus Christ, and for Gospel values to be promoted within society.

The aim of the three-year-long diocesan spiritual renewal was to give people resources to accomplish these goals, Mancini said. Although the renewal is wrapping up, some events are scheduled to continue.

For example, the diocese will continue to promote a communal reading of a book of the Bible each year. This year many parish groups read Acts of the Apostles together; next year 1 Corinthians will be read.

The Spirit Alive! Web site, www.rochesterspiritalive.org, will be maintained as an ongoing resource, and additional material will be placed on it in the future, Mancini said. The Web site provides resources to help Catholic families, teens, young adults and adults to sustain and increase their spirituality.

The diocese and individual parishes will focus on helping people discern their individual gifts to build the kingdom of God, she said.

The focus on faith and daily life has been incorporated into new adolescent catechesis curriculum called Embracing Discipleship. Catholic schools began using it this year, and it will be presented to all catechists in September 2010.

"What we hope to do is provide young folks with an opportunity to embrace discipleship as they transition to a new phase of life," Mancini said.