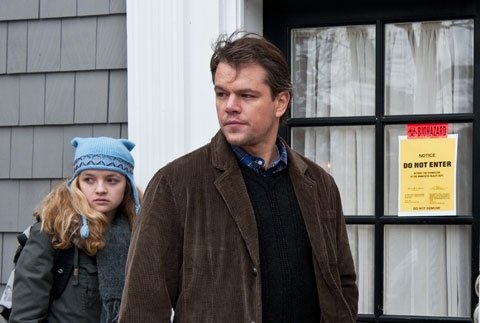 NEW YORK (CNS) — Don’t forget to bring along a bottle of hand sanitizer when you see "Contagion" (Warner Bros.), a compelling, moment-by-moment account of a deadly virus’ march across the globe.

Director Steven Soderbergh, who demonstrated a flair with all-star casts in the "Ocean’s 11" franchise, juggles a galaxy of luminaries here while reimagining the Hollywood disaster movie a la Irwin Allen (1974’s "The Towering Inferno"). Instead of Steve McQueen, Faye Dunaway and Paul Newman fighting fires, we have Matt Damon, Kate Winslet and Jude Law trying to squash a new super-germ that is decimating the planet.

It’s Thanksgiving, and Beth Emhoff (Gwyneth Paltrow) is feeling sick. Maybe it’s jet lag, or a hangover? She’s heading home to Minneapolis from a business trip to Hong Kong where she partied hearty in a casino with the locals. Her layover in Chicago is just that: time for a sexual encounter with an old flame (who’s married, as is she).

Pity Beth’s husband, Mitch (Damon). He and his young son barely have time to welcome Mom home before she dies, stricken by a mysterious ailment. Soon their son is dead, too, as well as a lot of people in Minnesota, Chicago (adultery can be deadly) and Hong Kong — anywhere Beth has been recently.

When the doctors perform an autopsy on Beth (one of the film’s gruesome moments) and see something odd in her brain, it’s time to call the Centers for Disease Control and Prevention. The unknown virus, deemed "MEV-1," is found to be deadlier and more virulent than SARS or the H1N1 flu, and a pandemic is imminent.

"We must find ground zero and see how this started," intones Deputy Director Dr. Ellis Cheever (Laurence Fishburne), in one of the film’s many references to 9/11 and what is regarded as a new form of terrorist attack.

Cheever dispatches his colleague, Dr. Erin Mears (Winslet), to Minneapolis. As a trained "epidemic intelligence service officer," she tracks down everyone who had contact with Beth while preparing the city to deal with the crisis and the mounting panic. Her counterpart in the World Health Organization, Dr. Leonora Orantes (Marion Cotillard), heads to Hong Kong and the source of the virus, which seems to involve bats and pigs.

"Contagion" becomes a fast-paced detective story and a science lesson, intercutting scenes from around the world with intense activity back home in the laboratories.

Meanwhile, an enterprising blogger, Alan Krumwiede (Law), takes to the Internet, fomenting unrest, even anarchy. He accuses the government of conspiring with pharmaceutical companies and withholding the vaccine. Krumwiede claims to have a cure himself — but is it what it seems?

As the virus spreads by touch, seemingly no one is safe. "You touch your face 2-3,000 times a day," Mears warns, and in between, she says, we touch everything else from doorknobs and toilets to other people.

The film contains disturbing images of dying people, corpses and autopsies, a reference to an adulterous relationship, and fleeting rough language. The Catholic News Service classification is A-III — adults. The Motion Picture Association of America rating is PG-13 — parents strongly cautioned. Some material may be inappropriate for children under 13.