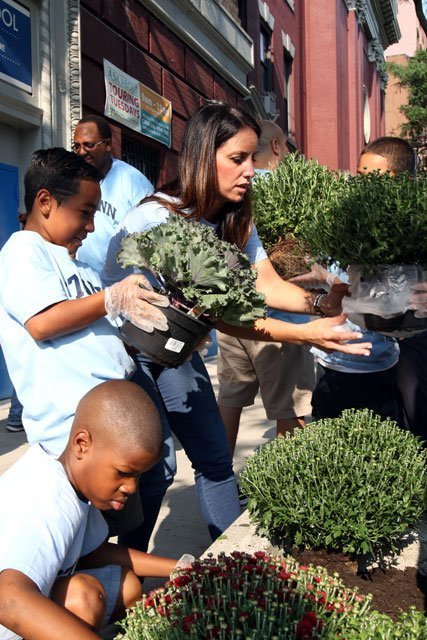 Principal Hope Mueller of St. Ann School in New York's Harlem community helps students plant mums outside the school Sept. 1. The community service project marked the World Day of Prayer for the Care of Creation. Mueller and six St. Ann's students will meet Pope Francis when he visits their neighborhood Sept. 25.
By Cindy Wooden
Catholic News Service
VATICAN CITY (CNS) — Leading prayers for the safeguarding of creation, Pope Francis prayed that people would learn to contemplate God in the beauty of the universe, give thanks and protect all life.
During an evening celebration of the World Day of Prayer for the Care of Creation, the pope prayed that God would "enlighten the lords of power and money so they would not fall into indifference, but would love the common good, encourage the weak and care for the world in which we live."
Pope Francis announced in August that the Catholic Church would join the Orthodox Church in marking the prayer day Sept. 1 each year.
In his opening prayer, he asked God to fill people with a desire "to protect every life, to prepare a better future so that your kingdom of justice, people, love and beauty would come."
Although the pope led the service in St. Peter’s Basilica, he asked the preacher of the papal household, Capuchin Father Raniero Cantalamessa, to give the homily.
In his homily, the Capuchin, a member of the Franciscan family, referred to both Pope Francis and his namesake, St. Francis of Assisi.
Some environmentalists, he said, have blamed the Bible and Judeo-Christian tradition for the destruction of nature, claiming the idea that human beings have "dominion" over nature gave them permission to use and destroy the earth.
But, he said, "the map of pollution" covering the globe coincides less with the places where people believe in God and more in places that underwent "unbridled industrialization aimed only at profit" or are subject to rampant corruption.
"No one can seriously serve the cause of safeguarding creation without the courage of pointing a finger at the exaggerated accumulation of wealth in the hands of a few," the Capuchin friar said.
St. Francis of Assisi, he said, was able to recognize and contemplate God’s beauty in all created things precisely because he owned nothing and recognized that anything he was able to use, especially for food or clothing, was a gift of God.
"Possession excludes, contemplation includes. Possession divides, contemplation multiplies," he said. If one person owns a lake or park, "all the others are excluded," but if no one owns it, thousands can enjoy it without taking it away from anyone.
Father Cantalamessa said that while the world St. Francis lived in was not facing the environmental emergency people today are facing, he still knew that if he took more than he needed, he was stealing from others.
"We must ask: Am I a resources thief, using more than my due and therefore taking it from those who will come after me?" the preacher said.
Pointing to Pope Francis’ encyclical on the environment, "Laudato Si’," the Capuchin said safeguarding creation is an "artisanal" activity, one that must begin with individuals and their daily actions.
"What sense is there, for example, in being worried about the pollution of the atmosphere, the oceans and the forests, if I don’t hesitate before throwing a plastic bag on the shore?" he asked.
Copyright © 2023 Catholic News Service, Inc. All rights reserved. Linking is encouraged, but republishing or redistributing, including by framing or similar means, without the publisher's prior written permission is prohibited.