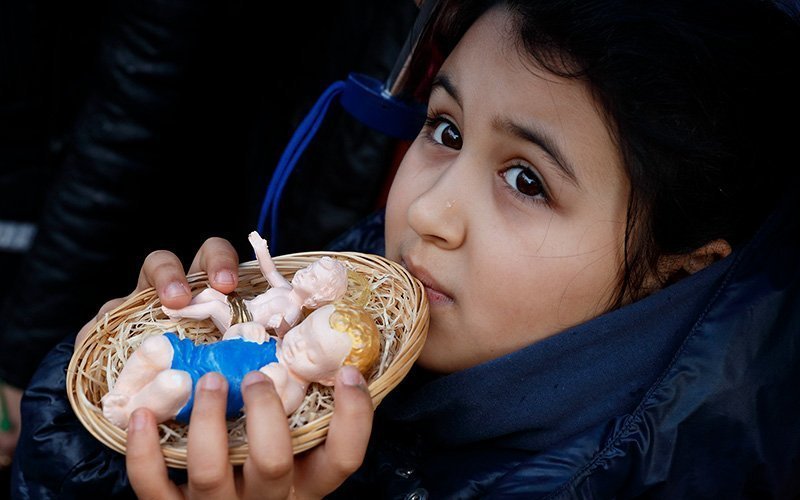 A girl holds baby Jesus figurines for Pope Francis to bless during his Angelus delivered from the window of his studio overlooking St. Peter's Square at the Vatican Dec. 15, 2013. (CNS photo by Paul Haring)

A called off Christmas: Seven ways to make it the best one ever

Separation. It is a reality of life that most of us have encountered in some form in 2020. Whether we have been separated from our families, friends or loved ones, found ourselves removed from our regular routines or felt the symptoms of disconnection from others that manifest spiritually and emotionally, separation has been a prominent feature of this year.

Even after a year where separation has been such a visceral everyday phenomenon, our Christmas and holiday season also will most likely succumb to this reality.

Unlike previous years, Christmas might look like responding to a Zoom meeting invitation instead of Christmas dinner, a lengthy phone call instead of swapping stories by the Christmas tree or cooking a family recipe from afar on FaceTime.

After such a long year, it can feel daunting to think about a Christmas that looks different from years past, with empty chairs instead of our loved ones’ presences.

What meaning is there for us in Christmas this year when so much of our lives have been characterized by the experience of separation? How could we possibly find God in the suffering of separation, especially in a season that for many us is often spent in closeness with others?

It can be easy not to give Christmas a second thought, especially this year; we can become desensitized to the story of the Nativity, of the plight of Mary and Joseph looking for shelter so Mary could give birth, and the willingness of God to descend into smallness.

It can be tempting to think of Christmas as a time designated particularly for children and families because of its focus on connection and gathering. This year, it might feel easier to dismiss Christmas than to consider its differences from other years.

However, this year, Christmas’ richness in meaning is perhaps most intended for those feeling separated, isolated and disconnected.

Christmas gives to our faith the mystery of the Incarnation: God becomes man. From Christmas, we learn that God is not only the creator of the heavens and earth, the confounder of pharaohs and kings, and the alpha and the omega.

We discover that God is also is a baby clutching his mother’s finger, and an infant reaching out to be picked up and cuddled.

At the heart of Christmas, we see the illusion of separation conquered by a God who comes near to us. Through the mystery of God incarnate, Jesus Christ, we encounter a God who not only draws near to us, grasping not at his power to exploit it over us but grasping for relationship with us.

In theology, this act of God reaching out for us is sometimes called “the scandal” of the Incarnation. It is scandalous that a divinity should stoop so low, to be so close, to cry, sweat and bleed, and to make himself so vulnerable.

But to a God who comes so close, scandal is just illusion: the separation of God and man.

Christmas is a celebration of the infinite love of God, a love that is unbounded, a love that loosens limitations and dissolves boundaries. It is the feast of a God whose love obscures the separation between divinity and humanity, God and man.

What does the meaning of the Incarnation invite us to this year?

It invites us to rediscover that God is infinite, surpassing time and every earthly reality but stooping low enough to be contained in the flesh of a newborn baby.

It calls us to reflect on how though we might be separated from our loved ones now, we are brought hope because of the mystery of the Incarnation.

It challenges us that, though we cannot embrace our loved ones now, we can embrace a person who arrives to meet us on Christmas: hope himself.

As Pope Francis reminded us in his March 2020 “urbi et orbi” blessing in the midst of the crisis of the pandemic, “Embracing the Lord in order to embrace hope: That is the strength of faith, which frees us from fear and gives us hope.”

(Campbell is coordinator of formation programs at the Catholic Apostolate Center, co-author of “The Art of Accompaniment: Theological, Spiritual and Practical Elements of Building a More Relational Church,” and a doctoral candidate in catechetics at The Catholic University of America.)