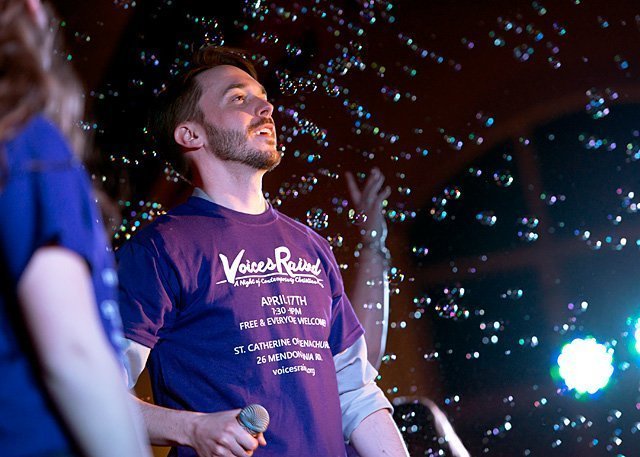 Colin Pazik performs with Voices Raised, a contemporary music group at St. Catherine of Siena, during a April 17 concert at the church in Mendon.

Stage lights, guitars, drums and a fog machine — not exactly the type of equipment one would expect to find in a Catholic church.

Yet these items were on prominent display at Mendon’s St. Catherine of Siena Church one Sunday evening in April. They were being used to help the parish’s newly formed contemporary music group, Voices Raised, create a concert-like feel and fill the church to the rafters with uplifting and energizing music.

In the pews, hundreds of people responded to what they heard by singing, clapping and dancing along to the music.

St. Catherine is one of several diocesan parishes that are expanding their music ministries to include contemporary Christian music, with an eye toward helping parishioners form deeper relationships with God and reaching younger audiences that may find traditional Christian music unappealing. Similar to pop, the genre is known as "praise and worship" music and typically is performed by a worship band.

Chris Estrella, music assistant in the Office of Worship for the Diocese of San Bernadino, Calif., has led a contemporary music group for eight years. He explained that contemporary Christian music is very passionate and spiritual, and can appeal to people of all ages. It particularly resonates with many younger people because it sounds similar to the secular music they already enjoy, he said.

"You are giving them (young people) music that is similar to what they are listening (to), but instead the topic is God," added Estrella, who will lead a workshop on contemporary music during this month’s National Association of Pastoral Musicians conference in Houston, Texas.

Moved by the message

"So often with traditional music, the formal language is so inaccessible, that it’s difficult to be moved by the message," Viavattine explained. "With contemporary music, it is very accessible and extremely personal. There is a lot in the music and the lyrics that makes people introspective and look a little deeper into their soul and relationship with God." 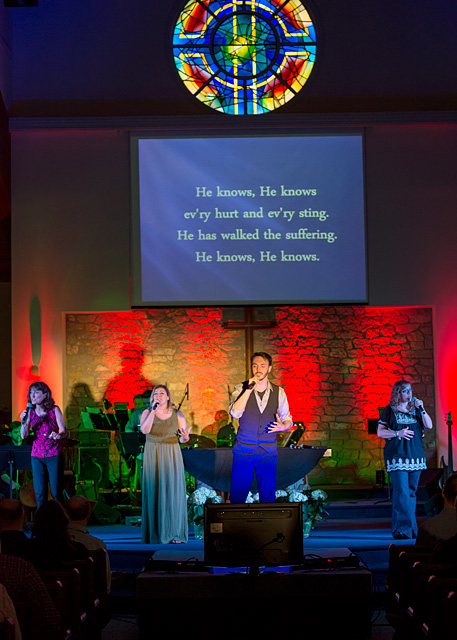 Viavattine then approached Father Robert Bourcy, pastor at St. Catherine, and the parish staff about the idea of forming a contemporary music group that would lead the congregation in music.

"They were really open-minded about the whole thing," she said. "They have given me some freedom to make creative decisions and have supported us along the way."

The contemporary group, which was named Voices Raised, began leading music at the church’s two Sunday Masses in the fall of 2014. The music leaders are Colin Pazik, Carrie Caramante, Lauren MacDonough and Colleen Wangler, who are accompanied by a rhythm section of guitar, bass, drums and piano.

Parishioners’ response to the new music was overwhelmingly positive, Viavattine said. The group’s members said people have been coming up to them after Masses each week to thank them for their ministry to the people of St. Catherine.

"If this music is going to get people to come every week and understand what’s going on and keep them happy and inspired, then that’s what we are here for," Caramante remarked. "We want the music to be part of the reason they come every week."

Amid such success, Viavattine said the group wanted to share their music ministry beyond the St. Catherine parish community, with the goal of inspiring as many people as they could. So the group’s members decided to organize a music and worship celebration that would be open to the public. A committee formed to handle the logistics, and after six months of planning, Voices Raised presented its first worship night on Nov. 15, 2015.

The group decided to create a concert-like venue in the church through the use of stage lights, monitors and a fog machine. The evening featured performances of contemporary Christian songs from such national recording artists as Matthew West, Lauren Daigle and Kari Jobe. The group also invited other parish singers to perform with them, including some young people, such as 11-year-old Emma Barstow. More than 500 people packed the church, according to Viavattine.

"The energy that was created on that night just exceeded everyone’s expectations," she said.

Since then, the group has performed two more public concerts, on April 17 and most recently on June 12 during the parish’s "Barbecue and Music Feast." That event also featured The Dady Brothers and Brockport singer-songwriter Chris Wilson. Voices Raised hopes to present concerts this summer and fall as well.

It was the upbeat, energetic sound of contemporary Christian music that drew recent high-school graduate Samantha Macartney to join Rock of Faith, the contemporary rock-style band at St. Theodore Church in Gates.

"The music really gets me into the Mass," said Macartney, who is one of the group’s vocalists. She said she likes the contemporary music Rock of Faith plays because it reminds her of the music she heard at the National Catholic Youth Conference she attended in November 2015.

Micayla Grego joined Rock of Faith when she was in middle school. Now a musical theater major at SUNY Fredonia, Grego said she still loves to sing with the group when she is home on school break.

Rock of Faith, which features five vocalists and six instrumentalists, is open to parishioners of all ages, but reaching youth members like Samantha and Micayla is the ministry’s goal. 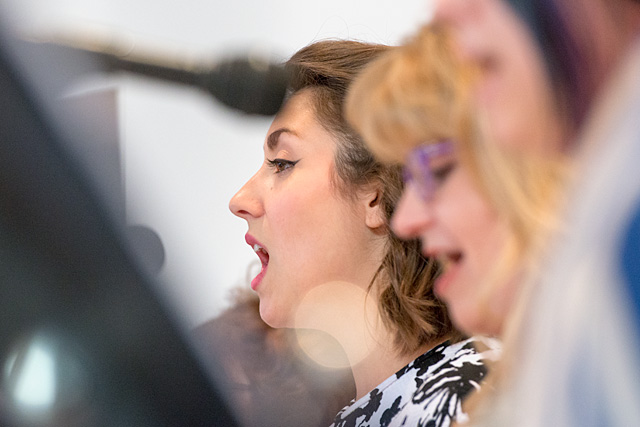 Micayla Greco sings with Rock of Faith during a June 12 Mass at Gates’ St. Theodore Church.

Involving young people in the ministry not only enhances the group’s sound, according to member Bernie Pernot, but also puts the youths in front of people in a positive way and gets them actively involved in their parish. And Rock of Faith offers youths opportunities to sing and play that they probably wouldn’t have as part of a traditional choir, he said.

For example, seventh-grader Molly Wescott plays the flute with the parish’s traditional choir but is the sole flutist in Rock of Faith.

"When Molly is playing with the rest of the choir, there are other flute players, so she doesn’t get the opportunity to stand out" as she does in Rock of Faith, Pernot explained.

He noted that Rock of Faith’s small group setting "is kind of nice because it gives the youth a little bit of freedom to play in a prayerful setting, which I think is a neat opportunity."

Rock of Faith has been providing such opportunities since 2008, when it began performing periodically at St. Theodore’s Masses. Patrick Furchill, the group’s leader, said Rock of Faith usually plays at a children’s Mass once a month and on other special occasions. A parishioner even hired Rock of Faith to play for her wedding, Grego added.

While the group focuses on reaching parish youths and families, its music also has struck a chord with some adults. For example, parishioner Kim Argenta decided to join Rock of Faith as a vocalist two years ago after hearing the group play at Mass.

The group’s members said they have received mostly positive responses to their music, noting that they see families clapping and singing along with them during Mass. Pernot said some parishioners have even stopped him at the grocery store to ask when Rock of Faith will next be playing.

Although both Voices Raised and Rock of Faith report positive reactions to their music, they acknowledge some parishioners have less favorable responses to it.

Although many people consider contemporary Christian music a great way to evangelize and enhance prayer, Estrella acknowledged that it can be a challenge for those who prefer more traditional worship music. In his role as a music assistant in the San Bernadino diocese, he noted that he has received many calls from parishioners who complain about contemporary music groups "overdoing it" and say the music is too complicated for them to sing.

Members of both Voices Raised and Rock of Faith said they keep such concerns in mind when selecting the music to perform.

"There are people who like more of the traditional music, and we do try to incorporate that," said Pazik of Voices Raised.

"Some people come to church and just want to hear the piano and the organ, and some people like seeing the guitars and drums," said Pernot of Rock of Faith. "We try to blend it all together."

Estrella said balance is the key when it comes to incorporating contemporary music in worship. For example, the contemporary music group he leads had planned to play all contemporary music for a recent LifeTeen adoration night. But when group members noticed that the congregation was mostly middle-aged people, they decided to perform the traditional Catholic hymn "You Are Near" in a praise-and-worship style, he said.

"The whole congregation, from the teenagers to the older people, were singing their hearts out. After all these worship songs we were doing, what got them was the prayer that they felt from this really old-school song," he remarked.

Estrella said he believes contemporary music will become part of regular, weekly worship as the young people who grew up on this genre of music get older and take on bigger roles in their parish communities.

"People are becoming more open to it, which is a good thing," he said.