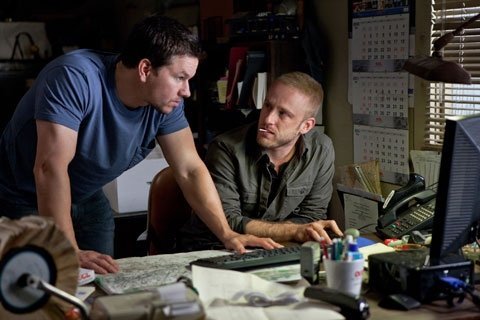 NEW YORK (CNS) — Movies set in criminal milieus are often less than life-affirming because of the nature of the felonious activity being depicted. Yet there’s something especially dispiriting about a crime thriller that only succeeds in being gritty on the surface because it doesn’t follow through on its own logic.

In the case of "Contraband" (Universal), a movie that promptly bogs down in a sea of expletives, the protagonist is an ex-smuggler who not only thwarts the bad guys while miraculously avoiding harm, but has no compunction about enjoying ill-gotten plunder. This revelation doesn’t qualify as a plot spoiler since the story follows a very predictable trajectory.

Moreover, considering all the vulgar language and violence one must endure before the falsely happy ending, the morally suspect message ultimately transmitted by "Contraband" amounts to adding insult to injury.

Mark Wahlberg plays putative hero Chris Farraday. Chris and his best friend, Sebastian Abney, (Ben Foster) are celebrated in New Orleans crime circles as "the Lennon and McCartney" of smuggling. That’s in the past, however. When the movie begins, Chris has quit the racket, started a legitimate alarm installation business, and moved to a quiet parish with his wife, Kate (Kate Beckinsale), and their two young sons.

When Kate’s little brother, Andy (Caleb Landry Jones), lands in hot water while trafficking cocaine, Chris decides he must pull one more job to raise the funds Andy owes drug dealer Briggs (Giovanni Ribisi), who threatens the entire Farraday family. Reuniting with some of his old associates, Chris joins the crew of a container ship and heads to Panama where there’s a stash of counterfeit greenbacks waiting for him to smuggle into the United States.

Sebastian stays in New Orleans and vows to protect Kate and the boys.

Based on the 2008 Nordic thriller "Reykjavik-Rotterdam," "Contraband" features energetic cinematography and ample heist tension. But Baltasar Kormakur, who produced and starred in the original, directs this Hollywood reboot without taking advantage of Big Easy atmospherics, exploiting the relatively novel shipboard setting, or revealing the ins and outs of high-seas smuggling. Plot twists are telegraphed and many of the supporting performances are over the top.

Adults who fancy hard-boiled crime flicks might be willing to withstand the nonstop obscenities (which threaten to sink the picture even before the opening title sequence concludes), if Chris’ repudiation of the criminal life wasn’t so short-lived and insincere.

Aaron Guzikowski’s script, however, shows him profiting from the escapade, and unrealistically avoiding any lasting damage, thus sending the message that crime does pay if you’re clever enough. We’re asked to believe that the ability to outwit the authorities and your fellow thugs renders a person immune from moral corruption.

The film contains skewed values, much lethal but only moderately graphic violence, one instance of drug use, some profanity and pervasive rough, crude and crass language. The Catholic News Service classification is O — morally offensive. The Motion Picture Association of America rating is R — restricted. Under 17 requires accompanying parent or adult guardian.