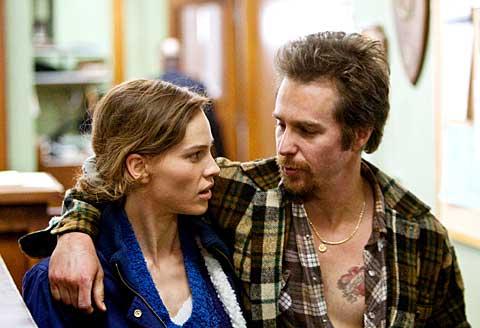 Hilary Swank and Sam Rockwell star in a scene from the movie "Conviction."

NEW YORK (CNS) — "Let justice be done though the heavens fall" ran an ancient Roman maxim. The fact-based portrait of a woman seemingly prepared to move heaven and earth in her quest to see justice done, "Conviction" (Fox Searchlight) makes for a gritty yet touching drama.

In small-town Ayer, Mass., in the early 1980s, Betty Anne Waters (Hilary Swank) — a working-class mother of two who never finished high school — watches in helpless frustration as her beloved brother Kenny (Sam Rockwell) is convicted of a brutal murder and sentenced to life without parole. Though Kenny’s brash personality, hair-trigger temper and record of minor run-ins with the law do nothing to help his case, Betty Anne remains convinced of his innocence.

As a series of flashbacks show, the siblings share an unusually close bond based on their challenging childhood. Neglected by their selfish mother (Karen Young), and left with no one to rely on but each other, their fondness for trespassing and shoplifting eventually landed Betty Anne in a foster home and Kenny in reform school.

In her desperation to see Kenny freed from his latest confinement, Betty Anne strikes on the unlikely idea of becoming a lawyer for the sole purpose of representing and eventually clearing him. Though this will mean completing her high school credits, earning an undergraduate degree, years of law school study and passing the bar exam, Betty Anne sets out on the long path to her distant goal undaunted.

Meanwhile, she also pursues her own investigation of the case.

As her suspicions focus increasingly on Nancy Taylor (Melissa Leo), one of the arresting officers, and as she discovers the potential of the then-nascent science of DNA analysis to vindicate Kenny, Betty Anne acquires the help of fellow law student and newfound friend Abra Rice (Minnie Driver) as well as that of famed attorney Barry Scheck (Peter Gallagher), co-founder of the real-life Innocence Project.

Set in a hardscrabble environment — its script (by Pamela Gray) studded with vulgarities — director Tony Goldwyn’s rough-edged salute to against-the-odds heroism celebrates Betty Anne’s selfless dedication and endless determination. But it also shows the toll her crusade takes on her marriage and on her relationship with her young sons Richard (Conor Donovan) and Ben (Owen Campbell).

In fact, as admirable as Betty Anne’s love for her brother may be, the fact that her husband gets left by the wayside in her dogged pursuit of Kenny’s release raises questions about competing family values and misplaced priorities.

Though the real Betty Anne was, apparently, baptized and at least partially raised a Catholic, the only hint of any connection to the church onscreen comes in a scene showing a priest delivering the homily during her grandfather’s funeral Mass.

For adult viewers not averse to a rough-and-tumble atmosphere — during one evening in a tavern, Kenny gets into a skull-cracking fight with a stranger then relieves the tension by performing a comic striptease — "Conviction" ultimately acquits itself with generally positive, though certainly not unmixed, underlying messages about courage, perseverance and family solidarity.