Cookies, sombrero and a shoe shine: Even reporters give pope gifts - Catholic Courier 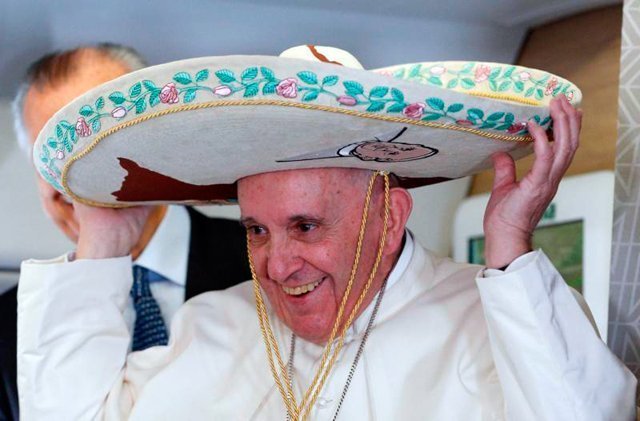 Pope Francis tries on a sombrero while meeting journalists aboard his flight to Havana Feb. 12. Traveling to Mexico for a six-day visit, the pope is stopping briefly in Cuba to meet with Russian Orthodox Patriarch Kirill of Moscow at the Havana airport.

ABOARD THE PAPAL FLIGHT TO HAVANA (CNS) — Making his 12th trip abroad, Pope Francis was accustomed to collecting interview requests, notes and gifts from the journalists who travel on the plane with him.

But his flight to Cuba Feb. 12 had a unique moment. Noel Diaz, who lives in Los Angeles and was covering the trip for ESNE — a Catholic radio and television network — asked the pope if he could shine his shoes "in memory of all those people who struggle daily to put bread on their tables."

Diaz told the pope that when he was growing up in Tijuana, Mexico, his mother told him he would have to delay his first Communion because she could not afford to buy him black pants and a white shirt. Although not quite 8 years old, Diaz said he went out with a shoe-shine box to earn the money for the clothes and was able to receive his first Communion with his peers.

The pope reluctantly conceded to Diaz, and the man knelt in the aisle of the plane and brushed the pope’s shoe. Then he gave the pope a shoe-shine kit.

Valentina Alazraki, a correspondent for the Mexican Televisa and the journalist who has done the most papal trips, gave the pope a large sombrero decorated with his coat of arms, his image and the image of Our Lady of Guadalupe.

Alazraki had given similar hats to St. John Paul II and Pope Benedict XVI when she traveled with them to her homeland. The pope put the sombrero on briefly and smiled for the cameras.

Nestor Ponguta Puerto, a radio journalist from Colombia, gave Pope Francis two golden bags of Colombia’s finest coffee and asked the pope when he would visit the South American country. If talks between the government and opposition groups continue and a peace treaty is signed, the pope said, "I will go next year."

The pope also received a white rose, a box of homemade chocolate chip cookies and a brand new zucchetto or scullcap. He put it on his head for a few minutes, then gave it back to the TV correspondent as a souvenir.

As is his custom at the beginning of a trip, Pope Francis thanked the traveling press corps and semi-apologized for the crazy hours they would work in Cuba Feb. 12 and in Mexico through Feb. 17.

"The schedule is full," he said.

Although the planned stop of three-and-a-half hours in Cuba complicated matters, Pope Francis told reporters the meeting there with the head of the Russian Orthodox Church "was very much desired by my brother (Patriarch) Kirill and me."

And speaking of Mexico, Pope Francis said, "My greatest desire is to pause" in front of the tilma, the cloak bearing the image of Our Lady of Guadalupe.

The tilma "is a mystery that is studied and studied, but there are no human explanations" for how the image was produced, the pope said. "It’s something of God."

Before greeting each member of the media one by one, Pope Francis publicly thanked Alberto Gasparri, the main papal trip organizer who has worked at the Vatican 47 years and is about to retire.