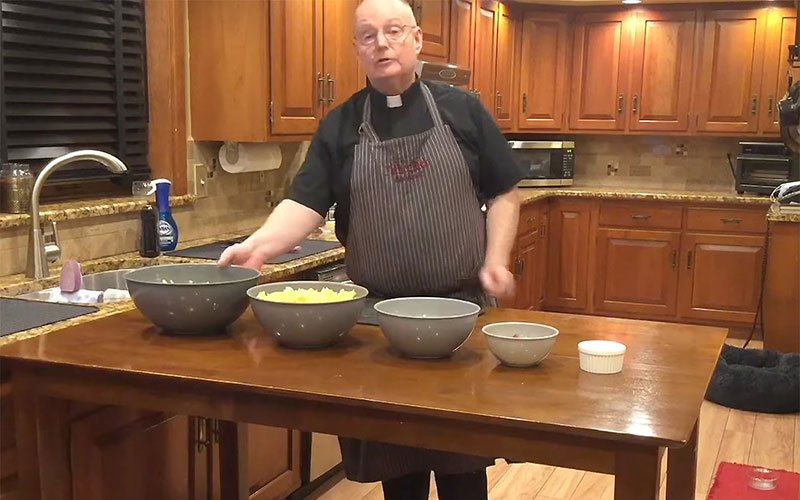 This is a screen grab from a collection of videos called "Cooks with Collars" created by the Diocese of Allentown, Pa. The cooking videos feature about 35 priests at parishes around the diocese as part of a friendly cooking competition that runs through March 1, 2022. It also is a fundraiser for each participating parish and the diocesan Catholic Charities agency. (CNS screen grab/YouTube, Diocese of Allentown)

ALLENTOWN, Pa. (CNS) — When priests hang up their clerical robes, grab their aprons and head for their kitchens, what’s cooking?

The answer can be found online at www.CooksWithCollars.com, where the Diocese of Allentown has posted cooking videos from 35 priests from parishes around the diocese as part of a friendly cooking competition.

“In the life of every cook, there comes a moment of truth,” an introduction to the series says. “Heroes will rise. Cakes will fall. So whatever you eat or drink or whatever you do, do it for the glory of God. And a vote or two.”

Proceeds of the “Cooks with Collars” competition go to the diocesan Catholic Charities agency and to each participating parish. Parishioners can vote for their favorite video by making a donation on the website. As of Feb. 16, the competition, which runs through March 1, had raised over $110,000.

Some of the foods the priests prepare — in some cases they prepare them with the help of parishioners — include: Hungarian goulash, banana beer, Grandma’s Christmas Eve Soup, brownies cooked in a waffle maker, African Ugali, chicken tikka masala and Scottish shortbread.

The videos also aim to entertain. Take one featuring Father Frans Berkhout at Sacred Heart Parish in Bethlehem, Pennsylvania. Donning a chef’s hat and an apron that says, “Many people have eaten in this kitchen and gone on to live normal, healthy lives,” the priest prepares “Father Frans’s fabulously famous old-fashioned family-style French fries.”

He reminds viewers of his motto: “Get your fries here or you may fry hereafter!”

“We’re all very excited for a second serving of ‘Cooks With Collars,'” said Paul Acampora, executive director of stewardship and development at the diocese. The first “Cooks” video series ran last year at this time.

“‘Cooks with Collars’ raises our spirits, connects our communities, and gives us great food for the body and for the soul,” he said in a statement.