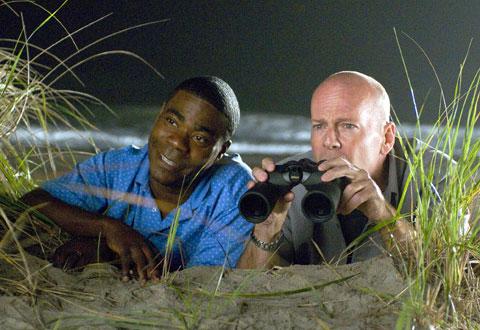 Tracy Morgan and Bruce Willis star in a scene from the crime comedy "Cop Out." (CNS photo by Warner Bros)

Suspended from the force when one of their characteristically unconventional investigations goes south, stoic detective Jimmy Monroe (Willis) and his bubbly sidekick Paul Hodges (Morgan) have plenty of time to pursue a personal matter: the filching of the valuable baseball card Jimmy was planning to sell to finance his daughter’s wedding.

The trail of clues leads to petty thief and housebreaker Dave (Seann William Scott) and on to a memorabilia-obsessed drug lord nicknamed Poh Boy (Guillermo Diaz).

Psycho Poh Boy — who likes to use bound human targets for batting practice — supplies the ammo for a number of bullet-riddled action sequences while, once in custody, Dave regales Jimmy and Paul with foul-mouthed, supposedly humorous riffs on bedroom and bathroom themes.

Drowned out amid these mostly smile-free proceedings, scripted by Robb and Mark Cullen and directed by Kevin Smith, are messages about marital trust — Paul is driven to distraction by fears that his fetching wife Debbie (Rashida Jones) is cheating on him — and the self-sacrificing parental love personified by Jimmy.

The film contains considerable, sometimes gory, action violence; a scene of torture; pervasive rough and crude language; about a dozen uses of profanity; and much sexual and scatological humor. The USCCB Office for Film & Broadcasting classification is O — morally offensive. The Motion Picture Association of America rating is R — restricted. Under 17 requires accompanying parent or adult guardian.