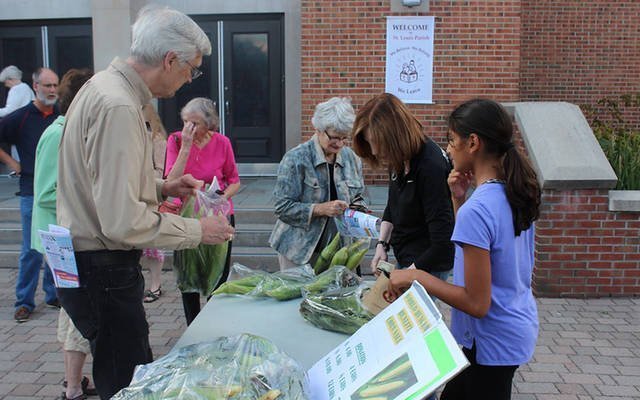 St. Louis Parish’s annual corn sale, a long-standing tradition at the Pittsford parish, will look a little different this year but remains rooted in love and generosity, according to parishioner Marcia Mendola.

Now in its 50th year, the sale will take place Sept. 12 from 3 to 6 p.m. and Sept. 13 from 8 a.m to 6 p.m. Proceeds from the sale will benefit the parish’s Haiti Team, which supports St. Damien Pediatric Hospital in Port-au-Prince, Haiti.

Over the past five decades, St. Louis parishioners have become accustomed to finding a wagon filled with ears of fresh sweet corn parked on the parish grounds one weekend each September. The Powers family, which operates Powers Farm Market in Pittsford, grows, harvests and transports the corn to St. Louis, and donates the proceeds from the sale to the parish, which in turn contributes these funds to a designated charity, explained Mendola, chair of the Haiti Team.

Typically, the wagon is parked in the courtyard in between St. Louis church and school, and parishioners can browse through the ears of corn at their leisure. This year, however, the sale will be a drive-through event in order to comply with social-distancing guidelines intended to limit the spread of COVID-19. The wagon will be parked along the circular driveway on the Main Street side of the church grounds, in front of the brick house to the left of the church, known to parishioners as “the Manse,” Mendola said.

Volunteers wearing gloves will bag the ears of corn in advance. Each bag will contain six ears of corn and be available for a $5 donation. Shoppers will decide how many bags they want and then pay for their corn by putting the exact amount of their donation into a jar. Change will not be given in order to minimize contact, Mendola said.

The sale’s organizers worked hard to revamp the sale and adapt to today’s challenges, but the most impressive part of the whole sale, according to Mendola, is the way the Powers family has given so generously of their time and produce for so many years. Roger and Betsy Powers began contributing their corn for the sale in 1970, and the succeeding generations have continued their altruistic efforts.

“(Roger and Betsy) have done it since their kids were little kids. Now their kids have kids. They have stuck with it through thick and thin, recessions, everything. That took a lot,” Mendola said.

In recent years, the corn sale has been a major fundraiser for St. Louis’ Haiti Team and St. Damien Pediatric Hospital. It’s not unusual for the fundraiser to bring in nearly $3,000 from the sale of corn and for the team to receive several large donations toward the cause during the course of the sale.

“Then the total amount gets doubled by an anonymous donor who appreciates the value of St. Damien Pediatric Hospital and its outreaches. The final total for the corn sale can be as high as $16,000 to $20,000 annually, and that could be a conservative number,” Mendola said.

The Haiti Team also sells locally made Christmas ornaments each December to raise money for the Haitian hospital, which was founded by Nuestros Pequenos Hermanos. This organization, founded in Mexico in 1954 by Father William B. Wasson, works with orphaned and disadvantaged children in Latin America and the Caribbean. St. Damien Pediatric Hospital is overseen by Passionist Father Rick Frechette, who has been working to help the Haitian people since the 1980s, Mendola said.

Located in Port-au-Prince, St. Damien is the only free children’s hospital in Haiti, and in recent months has been facing challenges wrought by both the coronavirus pandemic and Hurricane Laura in late August. While the hospital itself did not sustain major damage from the hurricane, the storm did stall the delivery of much-needed medical supplies to the hospital, Mendola said.

“Travel to the hospital was treacherous with the flooded terrain. The hospital’s caseload was increased with people hurt and sickened by the hurricane and by the coronavirus,” she said.

Due to a lack of access to water and pure water coupled with extreme poverty and crowded living quarters, Haitians have suffered disproportionately from the coronavirus, Mendola said. Weakened national economies throughout the world also have caused a decrease in support for the hospital from the international community, so the money raised locally is especially valuable to the hospital right now, she said.

“Every catastrophe increases the hospital’s caseload. Since it is free to the indigent in a country with very little medical care, St. Damien is pressed,” she added.